The anatomy of congestion

Travel today is relatively faster, and people across the world are travelling more than ever before. But at a giant cost: urban roads are choked with vehicles. The air throttles millions. While the affluent scramble for more road space, the not-so-lucky are getting cramped into increasingly smaller areas. The dream of mobility generated by the private motor vehicle is gradually turning into a nightmare of immobility, and pollution

The anatomy of congestion 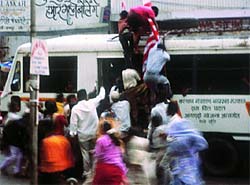 Rows of human hands hanging on inside claustrophobic buses, trams and metros...Bodies packed like sardines, jostling against each other...Tempers at breaking point. And outside, more chaos - thousands of cars, jeeps, vans, two-wheelers, three-wheelers...all groaning through a choking haze of pollution in interminable traffic jams that test one's patience and endurance skills. On cramped roads that are virtual death-traps for the unwary pedestrian or bicyclist. Every day. Almost every hour. This is the city of today.

The scenario, however, is not unremittingly bleak. Travel today is relatively faster and people across the world are traveling more than ever before. But at a cost: urban roads are choc-a-bloc with vehicles. The air chokes millions. While the affluent scramble for more road space, the not-so-lucky are getting cramped into increasingly smaller areas. The dream of mobility generated by the private motor vehicle is gradually turning into a nightmare of immobility and pollution.


In 1998, a consultation paper by the uk government on fighting traffic congestion and pollution through road user and parking charges estimated that 1.6 billion hours were lost by drivers and passengers on Great Britain's roads due to congestion in 1996: 80 per cent in urban areas. London, in fact, has been forced to ask motorists entering the city centre to pay a congestion tax of 8 from February 2003.

In Los Angeles, usa, a study by the Texas Transportation Institute says that hours lost by a peak-time traveler per year on road has increased from 47 in 1982 to 136 in 2000. The city also loses us $14635 million per year due to traffic congestion - and wastes more than 40 litres of fuel. Congestion today has gone from being essentially a localised peaking problem affecting a few drivers to a more widespread phenomenon that impacts almost all of us.

Across the world, the desire to travel more and faster has grown with the surge in economies. While it has reached a plateau in developed nations, developing countries today account for more than 95 per cent of this growth, says Mobility 2001: World Mobility at the End of the Twentieth Century and its Sustainability, a report by the World Business Council for Sustainable Development. The problem is that this augmentation in mobility rides almost entirely on private motor vehicles. According to the World Bank, motor vehicle ownership and use in developing countries is growing even faster than populations.

According to Mobility 2001, between 1950 and 1997, the global automobile fleet increased from 50 to 580 million vehicles. Developing countries, with about 85 per cent of the world's population, had only about 25 per cent of those vehicles (see table: Rich nations have too many cars). But with rapid economic growth, these countries are now adding vehicles to their existing fleets at rates as high as 10-30 per cent per year, compared to below 5 per cent for developed countries.

These cities bear the brunt of the mobility crisis. In India, Delhi, Mumbai, Kolkata and Bangalore account for about 5 per cent of the nation's population, but 14 per cent of its total registered vehicles. About 50 per cent of automobiles in Iran, Kenya, Mexico and Chile chug in their capital cities. Although data is rarely clear or comparable, downtown weekday traffic speeds in developing cities are dismal. They reportedly average 9 kilometres per hour (km/hr) or less in Seoul and Shanghai, 10 km/hr or less in Bangkok and Manila, and 17 km/hour or less in Kuala Lumpur and So Paolo.

The economic costs are formidable: Bangkok loses up to 6 per cent of its economic production - in terms of money - to congestion; in Brazil, congestion increases public transport operating costs by 10 per cent in Rio de Janeiro and by 16 per cent in So Paulo.

Chillingly, this state of affairs exists despite motorisation being still at a relatively early stage in most developing and transitional economies. Most developing countries have less than 100 cars per 10 people compared with 400 or more in the more industrialised nations. But they also face the danger of being transported into an extremely congested future.

The mobility dream may have just reached developing countries, but such is the rush of private vehicles on roads that most prevalent efforts to unclog the roads get bumped off the kerbside. The future also appears grim because in many ways the transportation profile in developing countries is completely unique. Take the case of taxis and three-wheelers. They are called intermediate public transport (ipt). Neither 'private' like cars nor 'public' like buses, squeezed between poor mass transport services and growing numbers of private vehicles, three-wheelers are a prominent feature of traffic in Indian - and South Asian - cities. Often badly maintained, run on adulterated fuels and extremely polluting, they pose a serious threat to the environment. According to Mobility 2001ipt's share in urban transport varies from a low of about 5 per cent of motorised trips in Dakar and Taipei to some 40 per cent in Caracas and Bogota and as high as 65 per cent in Manila and several other southeast Asian cities.

Traffic planners and policymakers today face a major dilemma: what do we do with vehicles like these? Indeed, this is part of a larger challenge: exactly how should they tackle the grimy confusion of private automobiles, public transport vehicles (that range from small minivans to large buses)and non-motorised transport in a manner that will decrease congestion and increase mobility? Most crucially, how can costs to the external environment, such as toxic emissions that prey upon public health, be minimised?
Features Vehicular Pollution Vehicles US Urban Transport UK Traffic Sustainable Development STATIST Road Transport Pollution Mumbai Mumbai Economic Development Developing Countries Developed Countries Delhi Calcutta Calcutta Bangalore Air Pollution Health Web edition Web edition News News News solar plant Renewable Energy Renewable Energy Down to earth Desert Sunlight … California California
SUPPORT US