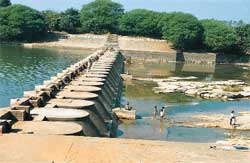 The movement had several curious fallouts. Satya Narain Sharma, the minister for housing and environment, was relieved of the environment portfolio without much fanfare. As minister, he had staunchly defended Som distillery and had denied the opposition charge that Betwa's water was unfit for consumption. At the time, he had said that the findings of the mppcb committee were with the state government and it (the government) had the issue under conside ration. This seemed absurd, as according to set standards, the bod levels of effluent discharge on land are not to exceed 100 mg/l. According to data collected by the said committee, the bod levels in lagoon no 4 (as per land application) was 14,000 mg/l (140 times higher than permissible limits). If this startling information was merely 'under consideration', possibly the functioning of the state government and its priorities were what needed to be considered.

"The July 16 incident was a result of run-offs from the Mandideep industrial area, and agricultural run-off like pesticide and fertiliser residues along the course of the Betwa," Sharma said while speaking to dte later. "The wastewater from the distillery was not responsible for the dead fish, and the distillery did not discharge its wastewater into the river." When reminded that bod levels in lagoon no 4 were far in excess of accepetable limits, he could not recollect the details of the issue ( dte spoke to him less than a month after the December 16 debacle). "The issue is an old one. Even at the time, I had neither been in favour of the distillery's working, nor against it," is what he had to say. He was unwilling to expand on the reasons as to why he had been relieved of the charge of environment. The cm and deputy cm informed dte that relieving a minister of a portfolio was "a routine affair".

cm Digvijay Singh blames the mppcb for the mess. He informed dte that his government's involvement in the issue was minimal, as the monitoring of an industry and its closure were the responsibility of the Board. When reminded that the bod loads of the effluents were 140 times higher, he reiterated that it was the job of the mppcb to look into it.

Perhaps the most inexplicable was the mppcb's behaviour. After concluding its findings, it had evidence that the distillery had not followed procedure, and that bod levels in the lagoons were in excess. The mppcb team had collected samples from the Betwa and the Jogi Khar nallah on July 16-17. It had noted that bod levels went up by 12 times after the Jogi Khar nallah joined the Betwa.

The report very specifically states that in the initial monsoons, high loads of polluted effluents reach the river through the Jogi Khar nallah. "When the samples were collected, the bod loads in lagoon no 4 ranged betwen 13,000-14,000 mg/l, and the chemical oxygen demand (cod) level was 30,000 mg/l," notes the study. In any sane situation, the monitoring agency would have immediately taken action; the mppcb chose not to.

In Bhopal, efforts of the dte team to speak to senior officials of the mppcb did not bear fruit. The scientist dte was directed to by the Board chairperson's office professed to have no knowledge of the issue. The entire issue is summed up by Dhiraj Shah: "The gap between what is pronounced as policy, its implementation and correlated work, and the ground realities, have no connection as such. The reasons are pollution and corruption. We, the beneficiaries, also wander about serving our own interests."

But it is in this one instance that self-interests seem to have taken the back-seat. The townsfolk know for certain that they have only won a skirmish, and not the battle. So far, the movement has managed without its superstars and big names; the forms of protest have had a design, a focus; political parties have not cashed in on the issue, claiming credit. Who would eventually be the winner is difficult to surmise at this stage. But a lamp has definitely been lit, which may show the way for others.