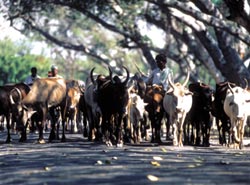 It's hard to tell who was the first in the village to really strike upon the business idea. But very soon everyone in Hangala was part of it. The sleepy and dry village at the periphery of Bandipur National Park, Karnataka, had in a mere two year's time, transformed itself into the nerve centre of a booming trade.

Hangala was selling cow dung. Auctioning it, quite literally, and making millions. The buyers came from other parts of Karnataka -- from Tamil Nadu and Kerala, as well. Those were years of boom, the 1990s. It isn't too bad, even today; though you are quite likely to get this wistful remark from the village's residents today: "The high point of the trade lasted for about five years and we all made good".

Hangala was not the only one to prosper from dung trade; the other 74 villages on the periphery of the park also thrived on it. And unknown to them, the trade was fuelled by happenings in Brazil.

Hangala, or any other village for that matter, never came to know how. They didn't care to, or needed to, say villagers, they just wanted to make the best of it. For, the region was in dire straits then. Rains had failed Karnataka repeatedly. 60 per cent borewells had gone dry in Hangala and the village's rainfall-dependent agriculture was on the verge of collapse.

The villagers, like most others in the region, grew low- yielding crops of millets and pulses. The average annual family income was as low as Rs 17,000. The money to be ploughed in to agriculture on the other hand was huge; labour, manure, fertilisers and seeds had to be bought before the monsoons. "Cash strapped, we perpetually ran to the local moneylenders," says Kalappa. Interest rates ranged from 60-340 per cent annually. Even if drought spared them one year, there would always be the crop-depredating wild pigs and elephants to deal with. As an alternative some farmers opted for cash crops, cotton and castor. The crops were to some extent resistant to depradations by wild animals and brought them instant cash. But only so much.

Everyone in the region was looking for better opportunities. And, when coffee prices around the world shot up in the early 1990s, the villagers found a way out of their difficulties. These were the years when the flurry of activity at coffee markets across the world matched the fury with which the frost struck and destroyed Brazilian coffee.
After crude oil and metals, coffee is the hottest selling commodity in the international market. The annual global exports exceed us$12 billion. About 60 countries trade in it, and Brazil, the largest grower contributes approximately 30 per cent of the global production.

Brazil's annual coffee production is, however, prone to recurrent bouts of frosts and droughts. In fact, frosts have severely damaged Brazil's coffee crop 31 times in the last 172 years. The frequency of the attacks have increased during the last few decades. And, in the mid-1960s and the mid-1990s Brazil suffered the worst, losing 50 per cent of its exports.

Each time the golden rule of the free market came into effect: when supply of goods reduces, prices shoot up. In fact, prices rose quite dramatically as coffee was (and continues to be) the centre of a international speculative trade, which keeps its prices volatile. The beneficiaries of this sudden rise were bound to be coffee farmers in minor producer countries, such as India (which produces 3-4 per cent of the coffee grown globally), with their produce steady in times of global slump.

But Indian growers were in no position to benefit in the 1960s. For, the farmers had to compulsorily sell their produce to the state-run Coffee Board at a fixed price. However, things were different in the 1990s: the Coffee Board had lost its control over the coffee growers. Now, the latter minted money.


The value of India's average annual coffee export rose by 158 per cent between 1989-93 and 1994-98, although the corresponding increase in export volume was only 36 per cent. Profits soared by as much as 834 per cent, much of it shared between coffee farmers of three contiguous districts: Kodagu in Karnataka, Nilgiris in Tamil Nadu, and Wayanad in Kerala. For, about 45 per cent of India's 3,467 square kilometres expanse of coffee-growing areas falls within these districts, which together produce 57.2 per cent of India's coffee. While the going was good, farmers increased the land under coffee plantations. There was a problem though: manure. Indian coffee growers prefer organic manure, which gives their produce a distinct taste and value. The ever-increasing plantations now needed larger volumes of it. The obvious source: cattle. But coffee growers were loath to let cattle graze on fertile and valuable lands that could alternatively be brought under coffee, yielding even more profits.

Dung had to be managed from outside the plantation area.

If coffee growers couldn't keep cattle on their highly priced land, couldn't someone else? It is difficult to say who thought of it first; the fact remains that the entire region cottoned on fast. Coffee growers prospected and hit upon the well-connected villages around Bandipur. A good choice: livestock was abundant, agriculture was nominal, and land was not intensely used, and therefore very cheap. Here was a source for manure, loads of it.

What must have clinched the 'deal' was that most villages on the northern boundary of the national park had free access to the park forests. So fodder was not a problem. The pact struck, an inter-state trade in cow dung took off.

Villages such as Hangala began auctioning their dung for as high as Rs 3,000 a lorry load. Brazil's ill luck and the vagaries of international commodity trade had brought the region unexpected riches. Hangala alone produced 39 tonnes of dung daily at the peak. Of this, it sold 16-24 tonnes -- an average of 4 truckloads every day. Here was a business with no recurring costs; the fodder was 'stolen' from forests. "And the cattle were bought dirt cheap from Ooty. We didn't need high milk-yield varieties, just ones which could amble through the adjoining forests and defecate" says Kalappa, a resident of Hangala.

Simple rules governing dung collection came into effect: all dung that fell in the cattle shed belonged to the cattle-owner; that deposited while cattle grazed in the forests was gathered by dung collectors (including women who found a formal occupation, finally). Dung collectors sprung up. So did agents, lorry managers, suppliers, brokers -- a supply chain.

The village council in Hangala decided it should also get a share of the trade proceeds and began auctioning off streets and public places for dung collection. Exclusive collection rights were auctioned off at nine public locations -- including the cattle pound and eight streets cattle used to reach grazing grounds. "We thought auctioning would bring money to the village for its development," says H S Nanjappa, zilla panchayat member. After all, the annual trade from this village alone was worth about Rs 65 lakh.

The fact that much of the village manure was going out did not impact farming: the money earned helped purchase government-subsidised fertilisers.

Over time, villagers bought more cattle; the bovine population increased in all the villages participating in the trade; in some, by as much as 30 to 40 per cent over just five years. And in a few villages the growth rate of livestock shot up as high as 13-17 times greater than the national average livestock growth rate for the same time period. 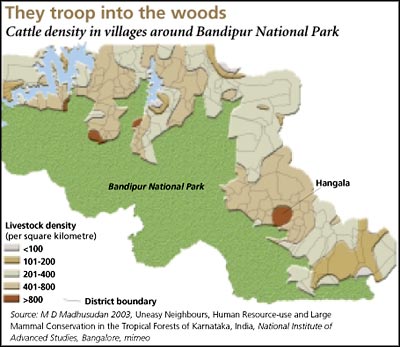 All this cattle grazed in the forest, with people following, avidly collecting. The only alternative for grazing, common pasture lands, had anyway long disappeared. Additionally, most villages were now cropping marigold, turmeric, cotton and sunflower, which produce no consumable waste. "And even where ragi (finger millet) is grown, it's a hybrid that produces very little hay," says A Obireddy, principal scientist, National Dairy Research Institute, Bangalore. The forest was the cheapest, and at times the only, source of fodder for the thousands of cattle.

Brazilian coffee is doing extremely well. Indian coffee growers face their worst crisis ever in 30 years. But the dung trade has acquired a steam of its own. "We now sell dung to Kerala for ginger, chilly, tea and many other crops. It's not as voluminous as before, but prices have risen by almost Rs 1,000 in the last two years," says M C Subbappa of Mangala village, which depends entirely upon dung trade (only about 10 of its 200-odd families own land). "What other options do we have?" he asks, as his 20-odd cattle rush home, tended by a labourer he pays Rs 5,500 annually. "I have had a daughter married off with this money. My son can work in the fields elsewhere because my future is secure." "Our dependence on moneylenders has reduced considerably," says Nagamma, a local tribal leader.

In Hangala too, the trade is flourishing. In the day, the village wears a desolate look: most men are out with their cattle. "Some are also trying for a few hybrid cows, for milk. The grass this side of the forest has been over-grazed. I tell them not to sell all their manure but what's to stop them? Its not illegal," says Nanjappa. Villagers recollect a local politician trying to stop the dung trade, even as his own henchmen made money off the trade.

It's not illegal to sell cattle for meat either and there is a huge demand from across the border in Kerala. "Well, some do sell their cattle for a good price," reluctantly accepts Kalappa. The village has more than 6000 cattle and nearly 5000 sheep and goats; there is enough meat to sell. A single cow can fetch up to Rs 8,000 for meat in Kerala. "Sometimes people who want to supposedly protect the cows from slaughter impound our cows at the Kerala border. But I guess they have to also fit into the business, right?" smirks Mallikarjun of Mangala village. He then goes right back to what he thinks is best for him: tending his cattle.