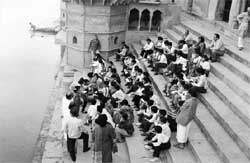 People are becoming aware of the concepts of ecology and environment, though a little too late. Moreover, they have not learnt these from our traditions but because the West is talking a lot about environment now," says Swami Sevak Charan of the Sri Vrindavan Conservation Project. Yet some small results are showing According to him, teachings relating our traditions to the environment should be incorporated in school syllabi. "All these things have to be institutionalised," he stresses, adding: "Nature was the centre of everything. The deities and gods were symbols of natural forces. Some things were made mandatory to ensure that people follow them in the name of religion and help keep things in balance."

Another reason given for resorting back to religion is that religious sentiments are very strong. "All things sacred are ecological symbols. These are the components for protection of the environment. Education in terms of the traditions and drawing connections with the modern world are necessary," says Pandey.

"Nature cannot be conserved as a museum piece and that is exactly what is happening now. We have to integrate elements, which can make conservation sustainable, and one such element is religion. We have to reorient ourselves and others," says Jariwala. "Environment is not a lush green garden. Everything that we do to conserve the environment should be human-centred and sustainable," says Goswami. Not that it is impossible. Exnora International, a Chennai-based organisation working on socio-environmental issues, has successfully done it. To sustain the cleanliness of places they had cleaned, they made paintings of gods and goddesses, of religious symbols of all faiths, on the walls. These places have never been dirty since then.

Another case worth noting is from Patna, the capital of Bihar. A report published on January 1, 2000, in The Telegraph of Calcutta showed how Bikash Chandra, a Sanskrit graduate and a tantrik (who tries to harness supernatural powers), known as Guddu Baba among his followers, went on a 48-hour fast as part of a crusade to clean up the Ganga basin in the state capital. The tantrik was quoted in the report as saying: "I have seen people falling sick after bathing in the river... but no one bothers about the problems of the ordinary people." The report pointed out that at least 100 bodies are cremated on the banks of the Ganga everyday in Patna and that many dump the half-burnt corpses in the shallow stream, leaving them to rot. The newspaper quoted Patna's district magistrate, Goutam Goswami, as saying that the tantrik's stand may help mobilise public opinion in favour of the administration's drive to clean up the river basin. One outstanding example of improving environmental and public health along the lines of Hindu spiritual traditions is from a movement called Swadhyaya, which literally means study of the self.


One almost misses a board proclaiming "Patanjali Vriksh Mandir" on the Ahmedabad-Vadodara highway in Gujarat. For those who know of it, no directions are required. Faith guides them. For the curious, too, the going is not tough. A bumpy ride eight km off the highway takes one to Ajod, a little green world in itself. There are nearly 2,000 fruit-laden trees in the garden, interspersed with shrubs and herbs that grow as if naturally. A separate portion of land has been set aside for the purpose of growing medicinal plants, most of which find use in Ayurveda and homoeopathy.

Welcome to the world of Pandurang Shastri Athavale, also known as Dadaji, the founder of the Swadhyaya movement and winner of the Magsaysay Award. The beauty of the place is not just in the plants but in the way they are grown and the philosophy that nurtures this experiment. Started nearly 13 years ago, this garden is akin to a temple in the sense that each and every part of it is sacred and revered by all who visit. There are nearly 20 such gardens in Gujarat and Maharashtra. The movement has been instrumental in introducing a realistic social change in India's rural communities.

"Dadaji believes that selfless service, without expecting returns, is the mantra to bring humanity together," says Karsanhbhai Vaghela, a retired employee of the Gujarat State Fertiliser Corporation, who has been visiting the garden since its inception. "Apart from making me feel at peace with myself, it gives me an opportunity to be one with nature and meet a number of people from different fields," he explains. "For us, this is religion. Exercises of indulging in self-pity at temples are not for us. Here, it is the culmination of devotion. That "work is worship" is clearly manifest in this garden," he adds.

The garden is based on scientific know-how, from vermiculture to drip irrigation to the sprinkling system. Nothing is wasted, little is bought and the produce, like fruits, is sold at nominal prices to neighbouring villages. Barter system is also practised. So, instead of selling the wild grass to the villagers, for whom it is sometimes difficult to dole out even a nominal Rs 60 a month, cowdung is taken as exchange for green fodder. Initially, a day-to-day system was followed. But this required a lot of planning and maintenance of accounts, so it was replaced by the barter system.

Swadhyaya does not need mahants or a hierarchy of priests. A system of "each one teach one" is followed. Those who know nothing about floriculture or forestry learn it here. And when they get back home, they utilise the knowledge and impart it to others willing to learn. The highlight of this experiment is that no pesticide or fertiliser has been used here. Instead, a preparation of bitter neem, garlic and cow's urine is sprinkled on the plants to keep pests at bay. "Initially, no villager living in the vicinity of Ajod believed such agriculture is possible. But once they saw the practical side of it, they took the experiment to their own farms," explains a regular at Ajod.

The fruits and vegetables produced here are of export quality and do not have any trace of contamination, as certified by the Food and Drugs Research Institute at Anand, Gujarat. However, Dadaji believes that this is not merely a money-making proposition but a system that brings humans closer to nature, whereby spare time is utilised constructively. The theme is to build relationships. Dadaji professes a vaicharic kranti , a revolution in thinking. And all this is based on bhakti (devotion) and the transformation of self and society. Dadaji's primary aim is to bring elevating thoughts to people who are completely ignored by all religious leaders and intellectuals. To bring people together and to rectify a system long-plagued by malpractices. Faith is a primary driving force and there is no room for unnecessary fundamentalism. The garden at Ajod reminds one of the sacred groves of yore, a popular Hindu way of protecting the environment in the not-so-distant past.

While it is clear that most Hindu festivals and practices have been taken out of the context and perverted into extremely polluting rituals without spiritual meaning, several individuals and civil society groups are achieving what religious leaders have failed to do: make people aware of the foundations and traditions on which Hinduism stands.

If India is to have a clean and healthy environment, it is imperative that the spiritual force of Hinduism - hidden under the garb of polluting rituals - is brought to the fore again. Spirituality is a great force, and one person who resorted to it in India's hour of distress under the British colonial rule was Mahatma Gandhi, who many say is perhaps the greatest Hindu of the 20th century. The mahatma realised the force of a common person inspired by socio-spiritual energy, and created what was one of the strongest social movements in history.

Several individuals and groups are trying to do the same in their own ways. But they are too few and too far between. At the turn of the millennium, Hindu society needs to draw on its very best. It is time for another Hindu revival that restores the individual's link with the society and the environment, time for a fresh set of examples, a fresh set of heroes. This will have to take into account the scientific revolution that has changed the face of human civilisation, for good or for bad. It is time for Hindus to re-read the Bhagwad Gita .

Written with reports by Kazimuddin Ahmed in Varanasi and Vrindavan, Suverchala Kashyap in Vadodara and Samir Kumar Sinha in Patna