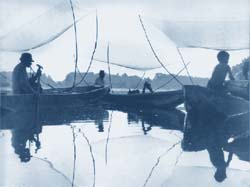 backwaters , small water courses, dunes with liana-covered Balkan oak-ash forests and sand steppes -- it is quiet, even serene, at the floating borderline between the Black Sea and the land. This is the Danube delta, one of the world's largest wetlands and the largest transboundary river basin in Europe. It is home to hundreds of diverse flora and fauna species. This is where the Danube, on its way from the Black Forest in south Germany through cities like Vienna and Budapest in 10 countries, finally empties into the Black Sea.

Danube is of outstanding importance in the European geopolitical region, which besides crossing the territories of many nations influences the lives of millions of people. The river basin of the Danube covers an area of 817,000 square km, where about 80 million inhabitants live.

Changing its name from Donau to Duna to Dunav and Dunarea, it is tempestuous in the mountains but meanders idly in the lowlands, where it is up to 800 metres wide. But the romantic pictures of Johann Strauss' Blue Danube with shining white steamers and tunes of a Vienna waltz in the air, becomes less and less true as the river travels downstream. Thanks to their long-standing water quality legislation and investment in wastewater treatment plants, its passage through Germany and Austria is largely undisturbed, except problems with high nitrate and pesticides in regions where there is with intensive crop production and cattle breeding. But the situation changes dramatically after the Danube enters Slovakia at Bratislava, where earlier the Iron Curtain divided East and West Europe.

Construction of dams and reservoirs, agricultural pastures and industries along the 2,857-km long Danube has disturbed the ecosystem. Sediments and nutrients have drained into the Black Sea, consequently natural habitats of numerous flora and fauna species have been reduced drastically. Fortunately, now the situation may change for the better and it may be back to the old, lazy days on the banks of Danube's blue waters.

The sap , an outcome of the convention, provides a framework for achieving goals of regional integrated water management and riverine environmental management expressed in the convention. sap constitutes the first regional and comprehensive approach to integrating all parties concerned in identifying common regional problems, setting common goals and identifying specific actions as Geoffery Weston, editor of Danube Watch , a magazine published by the Danube Programme Coordination Unit, summarises.

sap lists 179 'hotspots' on the Danube and its tributaries, local land areas and stretches of surface water, which are subject to excessive pollution and require particular action. Nearly half of these hotspots are due to lack of or inefficient municipal wastewater treatment plants. The list includes factories and mining operations, responsible for maximum discharge of hazardous substances. The most recent disaster the region saw was the cyanide spill at Baia Mare in northwest Romania, which was termed as "the worst environmental disaster in Europe since Chernobyl" (see 'Nightmare in Europe', Down To Earth , Vol 8, No 20).

Though lack of reliable data and studies make it difficult to assess the problems of contamination and health risks in the Danube region, one of the major problems are the high nutrient loads -- nitrogen and phosphorus -- in many of the Danube tributaries, sap states. Discharge of nutrients cause intensive eutrophication right down to the delta and the Red Sea, threatening the biodiversity and the economic potential of the riverine ecosystems. It could also lead to potentially high levels of nitrates in drinking water.


Compared to Western Europe, attempts for an international approach to environmental problems in the Danube from the eastern block started very recently. They became possible only with the fall of the Iron Curtain in 1989. Since then, former Socialist countries are undergoing fundamental transformations, considered positively by sap . Economic reconstruction and reforms should now create opportunities for improvement of water quality and supply systems, and introduction of new systems, which takes environmental considerations more into account.

At the same time, most countries are short of money. Many are in a desperate economic and sometimes political situation, some just recovering from a war like Croatia and Bosnia. All of them need logistical, technical and especially financial support.

But starting late can be an advantage, too. The Danube basin countries can build upon the experience of rehabilitation measures undertaken elsewhere in Europe. One of these lessons is to start right from the beginning with an integral, coherent approach to the problems in the river basin. So sap does not only deal with emissions and water treatment, but also for example with floods and all other aspects of environmental protection. It gives special importance and equal status to the natural system, including wetlands, which "should be treated as water users, along with people, industry and agriculture.

For the cash-strapped, deindustralised former Socialist countries, joining the Danube River Convention is one step towards closer links with eu . "There will be relatively cheap money available for certain ecological investments," says Meta Goreisek, Slovenia's programme coordinator in epdrb Task Force. Moreover, countries hope to profit considerably from the flow of information and expertise. Western European countries even view the convention as a contribution to political stability in the whole Danube region.


The Danube conservation plan, however, could have its share of hiccups. Weston sees weaknesses as lack of financial mechanisms, enforcement possibilities and participation, while geographic coverage in incomplete and the quality of information insufficient. Besides, the socioeconomic situation is not adequately taken into account and economic benefits have not been demonstrated yet. He concludes that to achieve sap 's aims it will be necessary to reinforce public sector participation in future planning, make reliable data available, set up financial mechanisms and create regional funds.

It is too early expect substantial results. It was only in November 1997, when the Danube Basin Pollution Reduction Programme ( prp ) was launched that the focus shifted to the central task of curbing pollution. Until then, the main emphasis had been on gathering information and improving the database, institutional development and strengthening environmental management efforts. The aim of prp , which is in the process of being finalised, is to define transboundary measures and action and to develop and investment programmes for national, regional and international cooperation.

Current expenditure is estimated to be about us $5 billion. One big challenge will be to mobilise donor support for specific actions and priority projects like municipal or industrial wastewater treatment plants. It is expected that a donor's conference will be held at the end of 2000 on the basis of the final version of prp .

Another challenge is to initiate closer cooperation with non-government organisations ( ngo s). So far, the programme has failed to win their support. "Up to now, the level of ngo participation has been unsatisfactory," says Entela Punguili from the Regional Environmental Centre ( rec ), an ngo with a network of offices in central and eastern Europe. It appears that not enough effort has been put into maintaining a structure of permanent ngo and private sector involvement.

rec has been invited by the programme to rally the support of ngo s by using public participation tools to establish and maintain their long-term involvement in the programme. "The project is expected to train a group of facilitators to enable ngo s to establish links between themselves and other stakeholders," says Punguili.