The cactus and its uses

Cacti are prickly, and pleasing. Extremely ungainly, they flourish in arid conditions where no plant will survive. Succulent inside, their thick coats and nettles ensure predators cannot get to the sap inside, sap the plants literally collect in drops off the moisture in the air. They are economically useful, and their flowers are magnificent...

The cactus and its uses 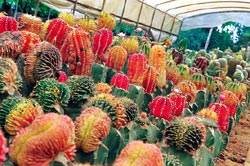 Cacti are prickly, and pleasing. Extremely ungainly, they flourish in arid conditions where no plant will survive. Succulent inside, their thick coats and nettles ensure predators cannot get to the sap inside, sap the plants literally collect in drops off the moisture in the air. They are economically useful, and their flowers are magnificent.

Only peek into the Regional Plant Resource Centre (rprc) in Bhubaneshwar, Orissa. The greenhouses that hold 1050 species and hybrid varieties of cacti -- its arguably the largest collection in Asia -- are a riot of colours: white, pink, purple, yellow, crimson and deep red. Only walk about, and you realize that there exists another world on this earth: cacti world.

Cacti require a small space, little water and minimum attention. They are quite extensively cultivated not only for the rare beautiful flowers but also for economic purposes. Growing in curious and unexpected forms, cacti bear both tubular or rotate flowers. They do grow in the wild; but are now also protected in conservatories and nurseries.

Cacti are thought worthy of breeding due to their unusual shape. It helps them obtain food; while the thick coats help to retain moisture and vitality for many weeks.

The cactus family constitutes one fifth of the estimated 10,000 known succulents distributed among many unrelated botanical families. Till date, scientists have failed to arrive at a specific figure for the classification of the cactus family. However, the International Organisation for Succulent Plant Study has adopted 93 genra and brought out an account of 2508 accepted species of cacti in the world. Though most varieties expectedly exist in dry, arid and even desert regions, succulents can be found in almost every part of the world, literally from the Arctic through the northern hemisphere; near the equator and southward to the Antarctic. In fact, they occur anywhere where the natural condition might be described as one of privation.

Cacti are unevenly distributed. Its largest concentration is found around latitude of 30-degree north and 30 degree south of the equator. South Africa and sub-tropical North and South America house the highest number of species and as well as being densely populated.

The natural distribution pattern has been greatly influenced by human activities. Rhipsalis are today found in Africa, Madagascar and Sri Lanka. Certain species of Opuntia can be seen in Australia, where they were introduced as ornamental plants in the 18th century.

Scientists are not too sure about the origin and evolution of cactus and other succulent plants. Hot, dry climates are not apparently conducive to the formation of fossils; thus they haven't been able to track the evolutionary history of succulent plants, and document them. A number of theories exist. Saya P Das, former rprc director, "An active centre of evolution could be the Canary Isles, long isolated from the mainland of Africa and with a high concentration of contrasting habitats in a small area. More than 31 endemic species are found in this small patch of land."

Whereas wild varieties of cactus are found in their natural habitat, the increasing demand for this magnificent plant has forced researchers and the business community to come up with protected cultivation. Protection cultivation is gaining ground in many urban centres in India as well as in other parts of the world.

Self-pollination is common in Melocactous and Frailea and occasionally in Notocactus and Rebutia. To evolve purely new and promising horticultural varieties, researchers have attempted to hybridise intra-specific categories and even have involved two or more different species via self-pollination.

The vegetative forms that many species of cacti take are often of the following three kinds: monstrous, crested and variegated. The monstrous and crested forms are usually mutations; these can either appear as a seedling or as a branch on an otherwise normal plant. A crested plant is one where a head or stem initially fans out, due to which new cells continue to form along a continuous undulating line along the fan. In maturity, most become contorted and quite large.

Absence of chlorophyll on part or over the entire surface of a plant causes variegation. If a part of the plant is affected, it can survive as it is. However, if the entire plant is variegated it cannot survive and grafting is necessary to preserve it.

Says rprc senior scientist P C Panda, "None of the cacti [the rprc has] are native to India; only a few of them, belonging to genera Opunitia, Cerus and Selenicereus -- introduced long back -- have now adopted wide range of habitats in the country." Of the three species Cerus is a night blooming cactus found in wastelands and as a hedge plant in most parts of the country.

The American genus Opuntia, represented by four species in India, is now thoroughly naturalised in different types of habitats. Other succulents like Aloe vera, Kalanche pinnata and Sansevieria roxburghiaba were apparently introduced to India in ancient times: reference to these plants exist in Indian mythology and in traditional systems of medicine.

A systematic effort to domesticate or cultivate cacti and other succulents was made only in the mid-18th century, during the British colonials administration. The Britishers settled down in different parts of the country and started growing succulent plants collected from many parts of the world for pleasure and fascination. The administration established a number of horticultural farms and gardens which included the East India Company Garden (now the Indian Botanical Garden) in Calcutta (now Kolkata), the Saharanpur Botanical Garden in Uttar Pradesh, and a garden in Darjeeling, West Bengal. The Selenicereus grandiflorus was grown in Indian gardens because of its large sweet-scented flowers, which open at night and wither before morning.

At rprc, apart from large-scale multiplication, other areas of research include different aspects of propagation, cytogenetic studies, hybridisation and looking for applications for physical and chemical mutagens. Some 200 new inter-generic and inter-specific hybrids and cultivars have been evolved at the centre through conventional breeding mutagenesis and growth manipulations. Of late, rprc is trying to exercise genomic in-sity hybridisation as a new tool in plant biosystematics for plant breeding. Says Panda, "It will help detect or monitor the presence of alien genomes, chromosomes and chromosome segments."

Propagated or nursery-raised cacti are more popular in the mass market because they tend to be healthier -- free of bug bites, sunburn, and other imperfections. Of all the cacti traded about the world every year, more than 99 percent are propagated, often by large-scale nurseries in the Netherlands, Japan, Brazil and the western us. In India, the urban needs for cactus is also growing. Says Panda, " rprc has been catering to cactus demand in all the major cities of India including the four metros. Beside, the centre has also received export offers from the United Arab Emirates, Holland, Bangladesh and other European countries. "As Indian cities are fast becoming concrete jungles, the cactus plants could provide a green stripe over the buildings," says Panda. "Of course, it can't be so helpful in bringing back the natural greenery."