The Cherry Blossoms of Japan

Green is the all pervading colour of nature. Beatiful and breathtaking. But not can stir the soul and the mind as the dazziling white of sakura, the Japanese cherry blossom, says ANIL AGARWAL

The Cherry Blossoms of Japan 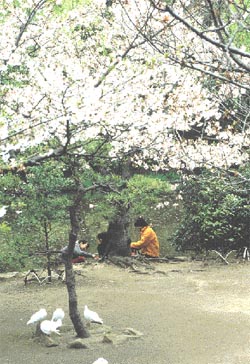 about a year ago, on a bright April afternoon, I took a train from the hills and mountains of what are called the Japanese Alps to Kyoto -- the city that the us army graciously struck off its atomic bomb hit list in 1945 because of its numerous palaces and temples. I could not help notice how green the hills were. As an Indian accustomed to seeing one barren hill after another, I was struck by the fact that there was no patch of slopey land that did not have tree cover. Later, as I travelled further into Japan, I was to realise that this was true not just of the hills in the countryside but also of the hills in the dense urban areas.

As the train sped down the narrow green valleys shining brightly in the resplendent April sun, interspersed with a few colourful homesteads here and there, the sudden flashes of the dazzling cherry blossoms became just breathtaking, especially the rows of trees planted along dark mountain watercourses. Their brilliance in that sea of green literally erased the background from one's consciousness. This must be sakura time in Kyoto, I reassured myself in anticipation, dying to see the trees in bloom at close quarters. There is something rather unique about the tree. As spring sets in, its blossoms run riot over the entire tree long before its leaves come out giving it a mind-blowing exquisiteness that probably no other tree can match.

Yes, I am right. Kyoto's cherry blossoms are in full bloom. They seem to have been planted especially in palaces and temples and along watercourses. The Kyoto Imperial Palace is full of them. So are the various temples and walkways along watercourses. But the most endearing is the Philosopher's Walk, a two-lane walkway on both sides of a drain, which has hundreds of cherry blossoms arching over its entire length and breadth. It is hard to leave the place without having a few philosophical thoughts.

Sakura time has always been very special in Japan. The tree begins to blossom as the spring warmth begins to hit the Japanese islands. But the blossoms last for only a few weeks before they leave behind a desolate plant. Starting in the island prefecture of Okinawa, then splashing the southern main island of Kyushu in a sea of pink and white, the blossoms strike the archipelago like a wave. Gathering momentum as it hits the ancient capitals of Nara and Kyoto, then cresting as it moves onward to soften the edges of Tokyo's gray urban sprawl, the swell of the flowers continues its journey into the mountains of Japan, lending colour to the rural farmlands of northern Honshu and, finally, the wide open vistas of Hokkaido.

The floral wave changes form and colour as its moves up the archipelago. The most commonly planted cherries in the Japanese countryside are the sato (village)- zakura , which have been cultivated, hybridised and grafted for over one thousand years. They come in all shades of white and pink, and even yellow, with flowers that have up to 30 petals. There are so many existing sato-zakuras and new ones are being developed all the time. Their taxonomy is under constant revision, giving perpetual employment to Japanese botanists.

Tokyo, however, is dominated by another hybrid, which apparently came from a single plant in a nursery about one hundred years ago. Known as the Tokyo cherry or somei-yoshino , this white-petalled plant is now found in most towns and cities of Japan. The mountains, however, still have their wild cherry varieties also known as the mountain cherry or yama-zakura . Their flowers are white to pink, and sometimes even darker. One variety, o-yama-zakura , found high in the mountains of Nagano, is quite dark red and is the most highly regarded cherry in Japan.

During this entire floral wave, the newspapers constantly keep their readers informed about the best days for the annual ritual of hanami or 'viewing of flowers'. Hanami parties invariably reach a feverish pitch and constantly make news. Tokyo papers report that an old couple, carelessly crossing a road while watching the blossoms, has been killed by a raging motorcyclist. Some 187 have been hospitalised because of acute alcoholic poisoning in the two weeks since the hanami began, even as the police keep a strict watch.

Japanese newspapers also keep track of the 2,000 cherry trees that the people of Tokyo gifted to the people of Washington, dc in 1912, where they were planted around the Tidal Basin of the Potomac river near the White House. The flowering of the cherries in Washington, dc is a very special floral occasion. The Mainichi Daily News tells me that for the first time, beavers have attacked the trees this year, and the park authorities are looking for a humane way to trap these animals. Another story in The Japan Times says that as most of the trees are dying of old age, agriculture secretary Dan Glickman has handed over 500 specially grown saplings of genetic copies of the originals to interior secretary Bruce Babbitt in a ceremony celebrating the survival of the historic cherry trees. Meanwhile, the Japanese have cloned a unique cherry tree taken from a Buddhist temple in Matsuyama, the paper reports.

It would be hard to talk about cherry blossoms without mentioning their long link with Japanese culture and history. In their own inimitable style, the famous Japanese samurai learnt a special lesson from the fleeting life of the blossoms . "The soul of sakura is the soul of bushido (chivalry) and the heart of bushido is the heart of Japan," according to the samurai. Like cherry blossoms swept away by a sudden breeze, they were expected to die willingly whenever their time came, however short their moment of glory. Thus the Japanese concept of hara-kiri -- short but glorious.