“The climate crisis is here and now”

Increasing risk of extreme weather has made it easier to have conversations on environment in El Salvador, the country’s minister of environment and natural resources tells Latha Jishnu

Herman Rosa Chavez counts every day that he has been in office. It’s a point El Salvador’s soft-spoken Minister of Environment and Natural Resources makes in all his conversations, underscoring the urgency with which he views his tasks, both in the domestic and international sphere. “For us climate change is a current problem, not something that will come 10 or 20 years hence,” says the man who was a surprise choice for the post when the left-wing government of Mauricio Funes assumed charge on June 1, 2009.

Chavez is not a politician. He is an environmentalist who had been campaigning in vain for measures to restore the country’s degraded landscape as head of PRISMA or Salvadoran Research Programme on Development and the Environment. As its lead investigator for well over a decade, Chavez is keenly aware of the extreme vulnerability of his country to global warming and the legacy of development that has completely ignored environmental concerns.

“It was an offer out of the blue just two weeks before the government was formed,” relates Chavez, who was in India recently to attend the 13th Biennial Conference of the International Association for the Study of the Commons in Hyderabad, where his keynote address provided a riveting account of the practical problems of policy formulation.

But interesting things appear to be under way in this tiny Central American nation. Politically, it is making its biggest shift ever. The ruling Farabundo Marti National Liberation Front is an insurgent group that became a legal political party in 1992 at the end of a bloody 12-year-long civil war in which the US played an unsavoury role and is tasting its first run of power after it made Funes, a television journalist, its leader. But as with governments the world over, the fact that it is “a socially progressive regime does not mean all its environmental policies are also progressive”, Chavez reminds you wryly.

The country is still grappling with its deep, systemic inequality—it is among the highest in the world—which sparked the brutal conflict of the last century. A majority of Salvadorans lives in harsh poverty, scraping a living from a land that has been degraded by industry and the vast sugarcane plantations that have poisoned the land and water sources with toxic agro-chemicals. During the decades the country was ruled by US-backed military regimes environmental concerns were totally ignored.

Yet, El Salvador has made amazing strides in redrawing environmental management policies in the 20 months since the new administration assumed charge. Two things have aided Chavez: the concepts and frameworks developed by PRISMA for preserving ecosystems which are helping him as a policy maker and the series of extreme weather disasters that have hit the country since the new government took over and their implications for food security. 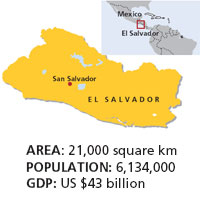 First there was Hurricane Ida that slammed Central America in November 2009, killing close to 200 people in El Salvador and causing damage of around US $230 million. Then there was the tropical storm Agatha which hit the country in May 2010, followed by unexpected drought which affected production of its staple food, the red kidney bean. However, the increasing risk of extreme weather, including droughts and excessive rain, all of which spell disaster for crops and livelihoods “have made it easier to have conversations on the environment,” says Chavez who is now more sanguine about environment-friendly development in El Salvador. “El Salvador is in an extreme situation and the choices, therefore, are more stark but easier to make.” 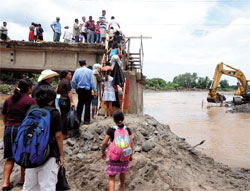 Risk reduction is the core of his approach but initially his Cabinet colleagues were not so willing to listen to his arguments. Until November 8 when Hurricane Ida dumped 355 mm of rain on the country in five hours—much more than what it receives during its wettest month. “We were all in our short sleeves at the presidential palace when Ida struck but the conversation on risk mitigation policies changed from that moment,” pinpoints Chavez. Another of his pet policies is payment for environment/ecosystem service (PES) based on the Millennium Ecosystem Assessment framework because “it provides the critical link between the environment and human living”. He argues passionately for PES or compensatory environmental services that integrate peasant and indigenous communities into ecosystem management.

His philosophy is clear. Environment in his book is a serious economic problem and choices have to be made in such a way that livelihoods improved along with the ecosystem. “There doesn’t have to be a trade-off.” But all the same tough decisions have to be made. For instance, Salvador is debating the conversion of sugarcane into biofuel. His ministry, after doing a strategic environment impact assessment, found that it would be risky because of its impact on groundwater and food security. While specifying no-go areas, it has suggested that sugarcane could be cultivated for fuel if the technology and agronomic practices followed by the industry are changed radically.

His great triumph on this score is that instruments that were applied in the process are now rooted in the environmental law. Earlier, clearances were given on a phone call (influence) or by paying money. No longer.