The Colour of GERMANY

For the first time in German history, the Green Party is part of the ruling coalition. The country is all set to embark upon new environmentally-sound projects and even a series of new green taxes

The Colour of GERMANY 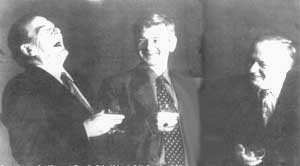 ON 27 October, a new government came to power in Germany. For the first time, the Green Party is a part of it on the national level. In Germany, where the political system is fairly stable and many obstacles prevent a new party from gaining influence, the Green Party is a remarkable success story. It has become an integral part of the German political system, accepted even by its bete noires. Does the rise of the Greens indicate a fundamental change in Germany society towards environmental issues?
The Green Party's roots can be traced back to the 1970s. Two social movements formed its base then - the environmental movement, which at that time was mainly an anti-nuclear one, and the peace movement opposing the US missile deployment in Germany. The fight against the so-called "peaceful use of nuclear energy" was fairly successful. Today, Germany has 19 nuclear power plants, relatively less compared to neighbours like France. Together they take care of 30 per cent of the country's electrical needs. Without this campaign, nuclear energy would have played a more important role as 20 years ago there was talk about meeting 50 per cent of the country's energy requirements through nuclear plants. The main reason for the success of the movement was a coalition between the conservative farming community and young, well-educated activists. Normally, these two groups have few points they agree upon, but in the anti-nuclear issue they came together.

The peace movement was extremely successful in mobilising people. Some of the largest rallies in the history of Germany since World War 11 were against the deployment of US cruise missiles. In Bonn, up to 500,000 people came together several times to protest. Though the rallies could not prevent the missiles from being deployed, they did play a role in removing them faster than many experts thought possible.

Activists from both movements - sometimes represented by the same individuals, for instance, the late Petra Kelly - soon realised that they needed an organisational basis in order to gain a long-term perspective for their activities. When they called for the formation of a new party, they were joined by activists dedicated to other concerns such as women's issues and human rights too. Nevertheless, for many years and, to some extent, even today, the Greens have been associated mainly with environmental issues.
It has not been a smooth ride for the Greens, The difference of opinions within the heterogeneous body made the day-to-day functioning of the party difficult. This became obvious, for instance, in debates on abortion or the role of women in society. Conservatives strictly opposed abortion'. This provoked strong resistance from the mainstream of the new party. Finally, the conservatives had to go. Some of their main figures, like Herbert Gruhl, founded a new party. But it never had any luck at the polls.

Most of the remaining party members regarded themselves as leftists, but this platform was not strong enough to create unity among the Greens. One issue became a bone of contention between the "fundamentalists" and the "realos" (political realists) for many years. Though not far apart in their convictions, they had basic differences in the path adopted to achieving their goals. The fundamentalists wanted to remain in opposition in order to be able to raise the important issues without any compromise. Petra Kelly once made the position clear when she said, "It is better to gain six or seven per cent of the votes and to remain true to our convictions than to have 12 or 14 per cent and betray our principles."

But the realos were interested in gaining more votes in order to take part in the democratic process. The realos gained more support among the population and, finally, got more seats in Parliament. The leading figure of the realos, Joschka Fischer, has been named the country's foreign minister in the present Social Democratic Party (SPD)-Green coalition government.


In 1980, the Greens took part in the elections for the first time and managed only 1.5 per cent of the votes. During the following years, in the height of the antimissile campaign, they grew stronger and in 1983 they entered Parliament for the first time, gaining 5.6 per cent of the votes. Four years later, they reached their best result in general elections - 8.3 per cent. But, in 1990, they again failed to reach the five per cent mark, which is the necessary to enter Parliament. The main problem was the dispute between the fundamentalists and the realos which upset many voters.

Before the September election, which made the Greens the coalition partner of the SPD, the party faced a severe crisis. It was not so much the trouble between fundamentalists and realos, but unpopular political demands and the way it should present them during election campaigns.

One issue was a resolution of a party convention demanding increase in the price of gasoline to US $3 per litre to curb carbon emissions. A few days later, a former Green member of Parliament went a step further demanding regulation of flights: German citizens should be allowed to go on vacation by plane only once in five years. From an environmental point of view, it is a useful proposal, but even fundamentalists were unhappy with it because the Greens had challenged the most sensitive issues of the Germans - cars and holidays - within such a short time (see box: At odds).

The real issue is that problems within the society have changed. Environmental issues are not very popular as the unemployment rate is as high as 10.6 per cent of the workforce. The economy is the decisive question. Green politicians are seen to be experts in ecology, not in economy, though many Greens have proved capable of handling different problems, including budget, economy and strategy to fight unemployment. They already share power with the SPD in four German states. Even political enemies are forced to say that they are doing a good job. But now they have to prove that they are strong enough to take over the responsibility of society in its entirety.

In the newly-formed government led by SPD chancellor Gerhard Schroeder, the Green Party has three ministers - Joschka Fischer as foreign minister, Jurgen Trittin for environmental issues and nuclear energy and Andrea Fischer for health. A new chapter in the history of the Green Party has begun.

Klemens Ludwig is a freelance journalist based in Germany