The ker plant signifies drought to people in the desert. It also provides food to survive on 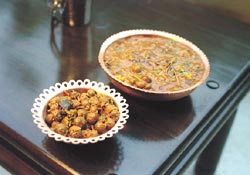 Capparis (popularly known as the 'ker' plant) is a genus with wide geographical distribution in India and other parts of the world including Egypt, Namibia, Corofon, Ethiopia, Somalia, Iraq, Baluchistan and Pakistan. In India, it is most commonly spotted in the dry and arid regions of Rajasthan. It is also found in parts of Haryana, Gujarat, Punjab, Uttar Pradesh and southern parts of the Deccan Peninsula. Of its 26 species, the Capparis decidua is most widespread in the Thar Desert.

Some local people say ker is a straggling shrub, others call it or a small tree. It flowers twice a year, but profusely so in the beginning of summer. During the drought of 1999-2002, in some of parts of the Thar it flowered thrice. The Bheel and Garasia tribals of Udaipur firmly believe that the abundant flowering of C decidua is a signal of an impending severe drought.

Its flower buds and unripe fruits are an integral part of the Rajasthani diet, especially during a drought. They are more popular as a pickle than as a vegetable; leading pickle companies, too, use the fruits to make mixed aachar.
The local people generally prefer a pickle combination of aam, ker and gunda fruits, boiled gently in til or sarsoon oil. Common spices and methi are added to the make the aachar more appetising; some Marwaris even put sonf, adrak and chana dal. The pickle can be eaten for a year at least. Unlike the commercial units, Rajasthanis are strictly against using any kind of preservatives.

The ker vegetable is a particular favourite of the housewives, as it can be cooked in 10 minutes. The recipe is also simple. The fruits are first salted and boiled in buttermilk, dried and then cooked in a little bit of oil using salt, pepper and condiments according to taste. If you are in a tearing hurry, then you can cook the fruits straight away. A mixed vegetable, called panchmal-ka-sag or pachkuta, can also be made of boiled fruits of ker, goonda, kumat, along with sangari and pieces of dry aam. It is served in parties and also eaten during festivals. Children are also fond of the ripe ker fruit called dhalu; its sap has a distinct sweet taste.

In southern parts of the country like the Konkan, the fruits are sometimes used to prepare curry.
The ker flowers contain fairly good quantities of vitamin c. The protein and mineral contents of the fruits are almost same as those of banana, grape, guava and the mango. The fruit husk and flowers contain alkaloids such as l-stachydrine and n-pentacosane, which are essential for the formation of salts in the human body. The flowers yield a stream of a volatile sulphur compound, which is active against several microorganisms. The alcoholic extracts of the flowers, fruit husk and seeds show antibacterial activity, particularly against the Vibrio cholerae, whereas the liquid extract is anthelmintic (effective against parasitic worms). Many vaids prescribe ker fruits for cardiac trouble. The extract of immature fruits can be used to cure trachoma (chronic conjunctivitis that can cause blindness). The tender leaves are used as poultice for piles, boils and swellings. When chewed, they relieve toothache. The roots and bark are also anthelmintic along with being alexiteric (capable of curing contagious and infectious diseases). They can cure cough, asthma, inflammations and pyorrhaea (a gum disease), and have purgative properties. The decoction of the roots and the bark is used to cure remittent fevers and rheumatism. The inner bark of the root is used to treat scabies and eczema. The plant is an ingredient in the popular medicine Liv52.

The plant has other uses, too. Young twigs serve as a fodder for camel and goats. Its wood is used by the poor people to make roofs and household articles like spoons. White ants do not attack the ker wood; therefore, it can even be used to make agricultural implements like the plough and the yoke. To take advantage of these benefits we need to conserve the plant, fast disappearing today from many parts of the Thar.

S M Mohnot is the director of the School of Desert Sciences, Jodhpur, Rajasthan