The drying up of the Jaisamand lake

If hydrocide -- the deliberate murder of a water body -- was a cognisable offence in India, the administrators of Udaipur city would be behind bars.Why? Because the water need and greed of this city has sucked out the water from lake Jaisamand, an engineering marvel built in 1685 by Maharana Jai Singh. This ancient temple -- not of stone or granite but of water -- is no, was a massive water body with a circumference of over 88 km...

The drying up of the Jaisamand lake 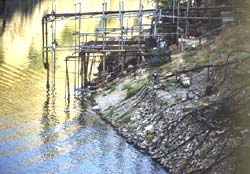 So, as the neighbouring city of Udpaipur, also famed for its lakes, tanks and stepwells, destroyed its own water systems and water scarcity grew, it had no option but to look beyond for its needs. And the city's thirst gave politicians a chance to promise a miracle -- they would bring water from Jaisamand lake some 51 km away. It was a plan that suited engineers and contractors alike. A massive pipeline was laid. Since 1996, some 15-20 million cubic metres of water each year was promised to the city of Udaipur. This, say some estimates, meets roughly 30-40 per cent of the water needs of this tourist city. Estimates are that it costs roughly Rs 25 lakh each month to pump the water, uphill to the city.

But nobody has cared to find out what this is doing to the lake. With its catchment already degraded and uncared for, its river channels encroached upon, its recharge was already stunted. Now in the last few years even the Gods have failed to make rain. So, they pump and pump sucking out the last drops .

What is shocking is that administrators know that in the last few years they have been draining the lifeblood from this lake. In 1999, all live storage -- the living water of a lake, which is replenished over time through rainfall and recharge -- was completely exhausted. From 1999, officials statistics show that what was being extracted was dead storage -- the reserved water used only in cases of dire emergency. These same estimates confirm that, in the next year, even the dead storage will be completely exhausted. The lake will then be officially dry (see graph: Dry as death).

But the administrators of Udaipur are clever. They have already made alternative provisions for the city's water -- a dam upstream and another lake. When will this hydrocide stop?