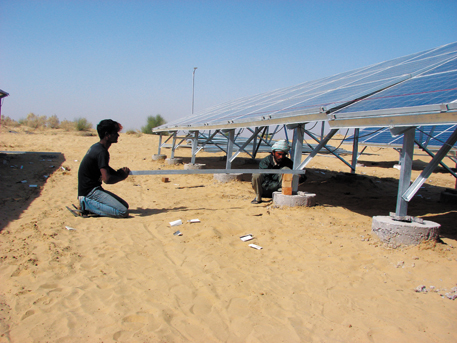 The census data of 2001 and 2011 are good indicators of energy use in the country. The data shows that Indians use firewood, crop residue, cow dung cake, kerosene, LPG and coal—lignite, charcoal biogas— as fuel sources.

Electricity, followed by kerosene, fulfils lighting needs of most households in the country. Other sources, including solar light, account for a very small fraction. The census data also categorises households as “No lighting”. But this category is very small numerically— ideally, it should have been near zero.

Given the relatively straightforward distribution of lighting sources, it will be convenient to take up this category first. The set of maps shows states in terms of use of electricity and kerosene as a source of lighting: high, medium and low. For example, the first map (see ‘Districts that lack electricity make up with kerosene’) shows low electricity use in a contiguous patch in the northern and the north-eastern India, Uttar Pradesh, Bihar, Jharkhand, Odisha, West Bengal and Assam (shown in red in the first map in the set). Kerosene use, concomitantly, is high in these areas (green in the second map in the set). Rajasthan, Madhya Pradesh and Chhattisgarh occupy an intermediate position in terms of electricity use (yellow in the first map) while most southern and western states and the northern states of Punjab, Haryana Himachal and Jammu and Kashmir show high electricity use (green in the first map). This pattern persists for both rural and urban areas.

The pattern becomes sharper once we look at the district-level in the next set of maps (see ‘Scenario improved since 2001, but not enough’ ). The map on the left depicts the cluster of districts by percentage of households using electricity as a source of lighting. In a large segment of districts shown in green, electricity is the main source of lighting for more than 80 per cent of the households. But in another compact cluster, shown in red, less than 47 per cent households have such access.

As any discerning reader would realise, this is quite the same cluster where more than 47 per cent households use kerosene as the major source of lighting.

The map on the right in this set is somewhat similar. The latter map depicts the situation in 2001 but here districts shown in green are the ones where electricity is a major source of lighting in more than 67 per cent households. What is more interesting is the compact cluster shown in red where such access was available to less than 25 per cent households.

The two maps tell us that the situation has no doubt improved since 2001 but the cluster of the deprived districts has remained more or less the same. This is a repeatedly recurring pattern; while the levels of deprivation decrease, the locus of deprivation endures far more strongly. This is a serious challenge to policy makers, planners, programme implementers, researchers and activists alike.

How do urban and the rural segments compare with regard to access to electricity for lighting? For that we turn to the third set of maps (see ‘Rural-urban divide’). The map on the left shows that a very large part of the urban landscape has more than 80 per cent households that access electricity as a major source of lighting. But the map on the right reveals the rural reality where a far smaller set of districts can boast of 75 per cent or more households having such an access.

It would appear logical that solar energy should have made a much stronger headway in the region where kerosene has been used for lighting. But that does not seem to have happened (see ‘Solar has not stepped in to replace kerosene’). One can no doubt see a sizeable cluster of districts in rural area where solar energy is used for lighting. But this cluster shows up only when we lower the cut-off level to as low as 0.2 per cent households. However, census data also shows that the number of urban districts where more than 0.2 per cent households were using solar energy for lighting has reduced considerably between 2001 and 2011. Solar energy has not been able to replace kerosene as the major source of lighting whether in rural or in urban areas. It needs to be analysed whether it is a cost issue, an access issue or a governance issue.

There is some hope. The 2011 census data also shows that in 46 districts in the country more than two per cent households use solar energy as a source of electricity. 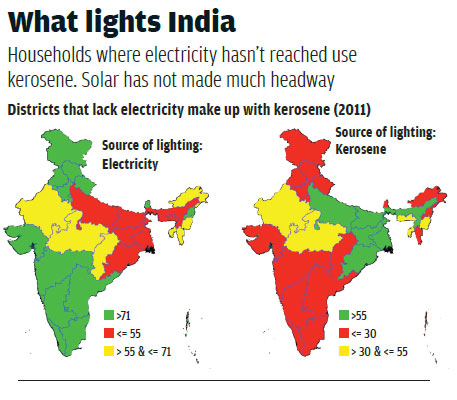 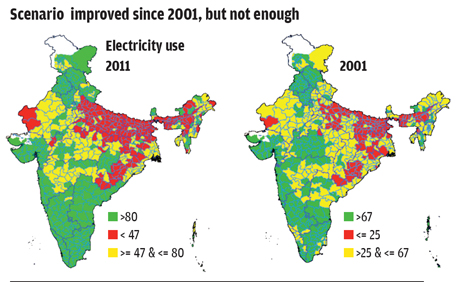 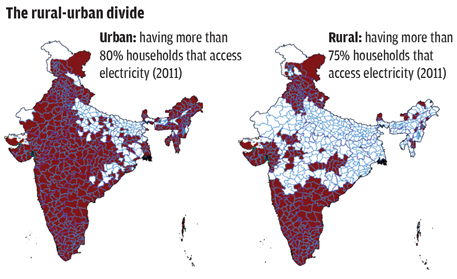 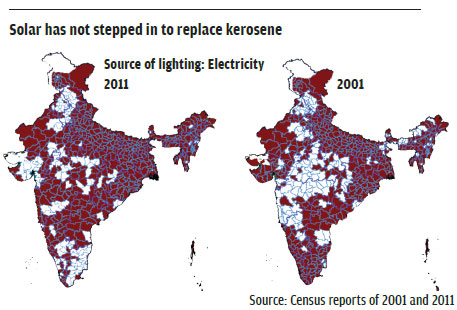 S B Agnihotri is a former Secretary Coordination, Cabinet Secretariat, New Delhi. P C Maithani is a Director in the Ministry of New and Renewable Energy, Government of India. Views expressed by the authors are their own and do not represent views of their institutions