The modern onslaught: talus being pulled down. They are earthen walls surrounding plots of land, and have trees planted on them 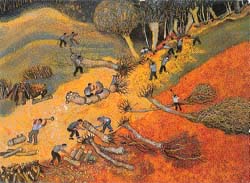 lucien poudras is a busy computer scientist. What does he have to do with painting? Moreover, what do his paintings have to do with the environment? Yet, at comuse de St-Dgan, an 'ecomuseum' in Morbihan district of France's Brittany region, one can view the naive paintings of the modest amateur. They are priceless in that they vividly portray scenarios of rural life that are now about to be forgotten.

At the comuse, visitors can walk about in a traditional hamlet and view the thatched cottages and farm implements used by the Breton peasantry before World War II. Old farmhouses and tools are fairly easy to restore. Not so the typical landscapes and intricate organisation of the age-old bocage , a traditional system of hedgerowed farmlands characterised by a profusion of sunken lanes and wooded talu s -- earthen or dry stone walls-cum-ditches surrounding plots of land (see Down to Earth , April 15, 1997).

At the end of their sight-seeing in the restored bocage of Poudras, the thoughtful tourists face the present vista of enlarged fields with little or no place for trees and hedgerows. They may, indeed they should, ask themselves why was such an intricate and well-balanced model of landuse bulldozed.
In 1937, just before the World War II, Poudras was born in a rural community of southern Britanny. He was able to memorise the land and the peasant culture of the times. This was just before the Green Revolution wiped them off the landscape. In 1960, after completing his two-year war service in Algeria, Poudras was back in his homeland, which was then in the grip of major changes. Bulldozers were levelling off the remnants of ancient rural lanes and talus .

Countryfolk were mesmerised by the city, its modern way of life and job opportunities. In 1947, Poudras' village had 8,000 inhabitants. In the period that followed, an average of 225 people departed each year for the booming urban areas, and the number of horses dropped by 100 each year. Rural folk spoke the Breton language, which was not taught in schools. Most parents, thinking that the native language belonged to the past, were unwilling to pass it down to their children. Such obstinate dismantling of his childhood surroundings left Poudras deeply upset.

He felt an urge to transmit the emotions, the ways and know-how of peasant society to his own children and to the new generations. To begin with, he thought about writing and speaking. But translating into French what had been thought, experienced or talked about in Breton would not be easy. One would miss the sounds, the idiomatic phrases, and the very gist of it.
Poudras decided to rehabilitate the bocage as a whole; to bring the old lifestyle back to life through painting. Painting became his way of overcoming the limitations of language.

You can see the amateur artist at work. Slowly, he lays out new groves, clusters, woods, coppice, fields, moors and meadows. He gives back to streams their original twists and turns, reopens the sunken lanes, rebuilds the talus and plants rows of trees on top.

At the time Poudras was trying, through his drawings and paintings, to restore the former Breton landscape, a number of young activists set their mind on revitalising the native language which modern society had discarded. They would reinstate the missing link between their children and the culture of their grandparents, establishing schools where youngsters would be taught through the medium of the Breton language.
Poudras' paintings centre around the relationship between rural society and the land. In his frames, people are at work everywhere because this landscape is truly the fruit of their daily toil. Farmers make the best use of streams, but they would never straighten them up. Roads follow the contour lines.

This human-made landscape is permanently alive with human activity. Farmers have entered into a maintenance contract with their environment. Hedges are trimmed, meadows are drained, irrigated, combed even, fields are carefully ploughed and harrowed. Each gesture is meant to achieve a particular result, with a sense of beauty. There are set rules to cut trees: hedgerows must look neat and trim, stumps must show a clean cut, and so on...

In Poudras' frames, all the people of the community have a role. Even beggars are not marginalised; they can have the occasional board-and-lodging for providing a hand on the farm.

An elaborate set of customary rules regulates the use of commons and renewable resources. Dead leaves should remain in situ in order to fertilise the soil. There are clear rules governing the use of streams for irrigation. Poudras, a keen observer, gives a peasant-like attention to the minute transformation of trees, plants and animal behaviour.

Poudras does not want to make people shed tears over the good old days. He is not a daydreamer. He tries to recreate an era bygone so that people can ponder on past mistakes and think about the best ways to build for the future. The traditional bocage cannot be reconstructed in all its ancient glory. However, some restoration work can -- and must -- be conducted.

Alain Le Sann is a teacher, environmentalist and social activist based in Lorient, France