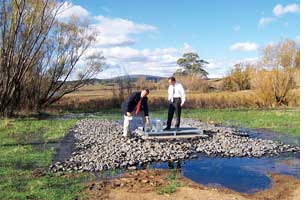 On April 23, Orange city in Australia crossed a major milestone. The city, 260 km west of Sydney, became the first in the country to commission a stormwater harvesting system that uses rainwater runoff to augment its drinking water supply.

"Tests on the initial batch of stormwater have shown the water to be as clean, if not cleaner, as the water that currently flows into the Suma Park reservoir, the city's primary drinking water source," Mayor Reg Kidd said.

By April next year, the city administration--Orange City Council (occ)--hopes to add 2,100 million litres (ML) of water to the reservoir by harvesting water from the Blackman's Creek, the main outlet for the city's stormwater. The water would be enough to take care of 40 per cent of the water needs of the 40,000 residents of Orange. As of now, 1,300 ML rainwater is harvested.

Resorting to measures such as the stormwater harvesting project that cost AU $5 million (US $3.8 million) did not seem necessary four years ago when the Suma Park reservoir, with a capacity to hold 18,100 ML of water, overflowed. The second drinking water source, the Spring Creek reservoir, too, had plenty of water. But a spate of dry spells between 2005 and 2008 led to a steep fall in their water levels. In August 2008, the Suma Park reservoir level dipped to an all time low of about 5,000 ML, just enough to meet a year's water needs of the city. This forced occ to rework its water management strategy.


To begin with, it enforced stringent water use restrictions (see box, Not a drop to spare) of level five under which violators are penalized with heavy fines that can go up to AU $2,000 (US $1,523). The council also appealed to citizens to reduce their water consumption and promoted faucet and shower fittings that use less water. These measures helped reduce water consumption from a peak 7,100 ML in 2002 to 4,390 ML last year, said Chris Devitt, director, technical services, occ.

The city administration simultaneously looked for ways to augment water availability. Rather than sourcing scarce freshwater, occ decided to use the city's runoff.

The Blackman's Creek's water flow had increased over the past two decades--the average flow of 160 litres per second (l/sec) under natural conditions had increased to 380l/sec. This was because 27 per cent of the 30.5 sq km catchment area of the creek had been built up and could not absorb water thus generating more runoff. On an average the city gets 53 episodes of rainfall, each generating more than 40 ML runoff. The peak flow of the creek at times crosses 790 l/sec. It was this excess flow the occ decided to tap. The council approved the South West harvesting scheme in 2008. A weir was constructed across the creek to create a reservoir. Pumps were installed to extract water from the creek and transfer it to two batch ponds for preliminary treatment.

Once the water quality criteria are met, the water is transferred to the Suma Park reservoir, 10 km away, through pipes. occ said the water harvesting system is still at the commissioning stage and so it is not releasing the water quality test reports yet. "All we can say is that we have satisfied our established criteria," said Jonathan Francis, environmental scientist, occ.

The city administration has installed a gross pollutant trap at a prominent public place. The first time it was put to test, the trap removed 35 tonnes of debris and suspended material from rainwater runoff.

There are a number of such traps in key locations all over the city. Officials said the proximity of the creek to the Suma Park reservoir and the state-of-the-art water treatment facility in the city--an ozone and biological activated carbon filtration plant that treats water from the reservoir--made the water-harvesting scheme possible. The ozone destroys pathogens while the filtration unit removes remaining toxic compounds.


Farmers living downstream of the weir are worried they may get less water for irrigation if the drain water is diverted to the reservoir. The farms are known for premium grapes, apples and berries. Ian Pearce and his wife Pru who own a farm three kilometres downstream of the weir said there were no problems till 1998 when the creek was an outlet for the city's treated wastewater. But that year occ awarded the rights over the treated sewage to a private firm, Cadilla Valley Operations, for its gold mining activities. This reduced the average annual flow in the creek by one-fourth. Harvesting stormwater will further reduce the flow, Pearce said.

Council officials said farmers' needs have been factored into the scheme and they would not suffer. There are five farms downstream that have titles for extracting 265 ML water a year and the harvesting will not affect the quota of the farmers, said Francis, the environmental scientist. The council has a set of operating rules for the harvesting system that ensures minimum downstream flow of 23 l/sec. A monitoring station measures the flow in the creek and the pumps start working only when the flow exceeds the minimum flow, officials said. But Pearce is unconvinced. He feels the present minimum flow level should be raised.


The integrated water management plan of the occ to tackle water scarcity is a pointer for other countries looking for ways to make their cities drought resistant. But most developing countries are not in a position to implement it.

In Indian cities, stormwater drains double up as carriers of sewage and industrial effluents due to non-existent sewerage networks in many areas. For stormwater harvesting to work, the sewerage network coverage, as in the case of Orange city, needs to be 100 per cent.