A petroleum product factory continues to chug out its poison, despite a decade of protests and official ire 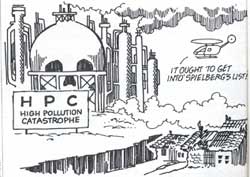 FOR the past 10 years, over 12,000 inhabitants of Meethapur village on Delhi's Badarpur border have been racked with cough and breathing problems that often degenerate into asthma and tuberculosis. The Batra Hospital & Medical Research Centre (BHMRC) -- which caters to Meethapur in the absence of closer medicare centres -- is under regular siege by a steady stream of villagers complaining that their lungs are giving out.

At the eastern edge of the village lies the Hindustan Petro Chemicals (HPC), a blown bitumen and bitumen emulsion factory that has been chugging out for a decade perilous doses of carbon dioxide, carbon monoxide, sulphur dioxide, methane, ethane and other hydrocarbons. Villagers say that the factory also shoots its liquid effluents -- a noxious brew of water, hydrocarbons and oil -- approximately 20 metres underground at the periphery of the village. The villagers allege that earlier HPC used to drain the effluents into the Agra irrigation canal, which runs parallel to Meethapur.


"The emissions and effluents have also affected Meethapur Extension, Tajpur, Tajpur Pahadi, Jaitpur, Harinagar and Molarband Extension," says Jagdish Chand Verma, 50, of Meethapur. The discharge of effluents into the ground is irreversibly polluting the groundwater, allege the villagers. The water tastes foul. Besides, a nauseating smell hangs in the air. Says Nanak Chand of Meethapur, "Because of the nauseating smell our children are unable to eat." "Whenever the factory functions we feel like vomiting," adds 12-year-old Satender Kumar of Jaitpur.

Six-year-old Savita of Meethapur has a persistent cough, and her voice is a painful croak. Moreover, Rukmani Devi, Savita's mother, had been suffering "headaches and a pain in the nape of the neck for the last 18 months. She also has had a pain in the lower abdomen for one month," says R K Himtani of BHMRC.

Not willing to suffer all this idly, the villagers formed the Pradooshan Virodhi Morcha, which held a demonstration in front of the factory gates on February 13. Complaints against the factory were made as early as July 24, 1984, to the then Prime Minister by Members of Parliament R M Bhoye and N K Solanki. The Central Pollution Control Board (CPCB) conducted an investigation based on this complaint. It found that the factory had "no pollution control equipment".

In May 1987, the Indian Oil Corporation (IOC) had found that the factory's gaseous emissions contained excessive benzene soluble organics and hydrocarbons; light diesel oil was imperfectly burnt and there were open vents in the heating tanks. It suggested that HPC use a Venturi scrubber, properly incinerate scrubbed gases, remove the oil from water in closed separators and recycle the oil as fuel, and increase the stack height to 30 metres. Three years later, IOC found that its suggestions had not been taken seriously.

Significantly, a note from the ministry of environment and forests to HPC on February 11, 1988 stated: "Because of the improper design of the heating system, sulphur dioxide, hydrocarbons and smoke are emitted, which are let off into the environment because of the low level of the stack. As a matter of fact, the whole operation results in an obnoxious odour."

Consequently, the factory had been ordered to close shop in February 1988 by the then environment secretary, T N Seshan. HPC owner Y Sawhney says that within four months he had increased the height of the smokestacks and installed a secondary scrubber and oil separators. The factory had then resumed operations.

However, the last consent of operation granted by the CPCB on July 11, 1989, expired on June 30, 1992. The plant has since then been operating without official consent.

The factory is also a fire hazard waiting to blow. A survey conducted by the Delhi Pollution Control Committee in February 1994 found that "more than 1,000 drums of different grades of bitumen are stored in the open" in the factory premises.

The frequent agitations have ensured that the factory functions only at night. Besides, the local Janata Dal Member of the Legislative Assembly, Ramvir Singh Bidhuri, says, "The case has come to the notice of the chief minister and the environment minister. We are looking forward to the factory's closure." Meanwhile, Savita coughs her lungs out.