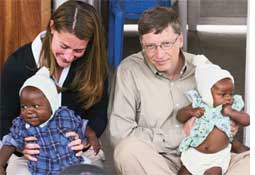 Foreign funding plays a crucial role in India's healthcare system. But, over the years, the public health fraternity has observed that the funding does not make much difference in improving people's health. They say there is often a lapse in understanding the real problem at hand.

For example, in March 2008, the Global Alliance for Improved Nutrition (gain) met in Delhi to discuss ways to curb malnutrition in the country. It suggested fortification of milk with vitamin A. Public health experts criticized the suggestion and said the poor, who do not drink enough milk, would not benefit from such a programme.

gain is funded by the Bill and Melinda Gates Foundation, which has grown into the world's most influential funding agency today.It spends large amounts in healthcare projects in developing countries: in 2007, it spent US $1.65 billion on health--almost equal to the who's annual budget. But unlike who, the foundation's method of putting money in projects is random and has often been criticized. The latest criticism was in the May 9 issue of the medical journal The Lancet published in the UK.

Researchers of the University College London (ucl) analyzed the grants the foundation has given for improving health: between 1998 and 2007, it had donated US $8.95 billion, of which US $5.82 billion was shared by just 20 organizations. These included Global Alliance for Vaccines and Immunization, gain and non-profits like path (Program for Appropriate Technology in Health), OneWorld Health and Save the Children Federation. These organizations work large-scale in India.

The Johns Hopkins Bloomberg School of Public Health in Baltimore, usa, supported ucl researchers' analyses. In a commentary of the paper, researchers said there is poor correlation between the foundation's funding and childhood disease priorities. They said the foundation's commitment of halving child mortality in 20 years was ambitious. The reason: its funding was targeted towards research for development of new vaccines and drugs, which itself is time consuming and uncertain.

Welcoming the Lancet article and the ucl study's findings, the Gates foundation said, "We use our best judgment to determine where our funding can achieve the greatest reductions in health inequity."

Another criticism of the foundation highlights its bias for malaria and hiv/aids and against TB, maternal and child health and nutrition. Chronic diseases are absent from its spending portfolio, said a 2008 study by Oxford University. Between 2003 and 2009, most funds given to Indian non-profits were for hiv/aids. Maternal, newborn and child health got one-tenth of the hiv/aids funding. The reason for the mismatch between the need and the funding, said a Lancet editorial in 2005, was the lack of field experience of the foundation's health management team.

The Gates Foundation representatives have visited India several times in the past year to determine ways to support the National Rural Health Mission, said Abhijit Das, director of the non-profit Centre for Health and Social Justice in Delhi. "It was evident during the visits that they consider technical interventions far superior to understanding social determinants. They prefer the private sector. "

The public health sector is opposed to any dependence on foreign funding. "While such funds are available now, their absence later might create a problem for the government," said Mira Shiva, coordinator of the non-profit Initiative for Health, Equity and Society in Delhi. Jacob Puliyel, paediatrician at the St Stephens Hospital in Delhi, said the Gates funding was a ploy to promote industry. "Multinationals get money from the foundation for products they couldn't have sold in developing countries directly."

Abhijit Banerjee, economist with the Massachusetts Institute of Technology in the US, said ground realities in India must not be forgotten. "Improving delivery systems for basic public health and sanitation should have the highest priority. The foundation cannot offer the Indian government money to punish delinquent officials. That is why it is putting money in developing a vaccine rather than trying to improve the delivery of drinking water though that makes more economic and medical sense."