Three weeks ago, a university institute in Normandy, France, sparked fury, outrage and an astonishingly vicious battle between scientists across the world by publishing results of a two-year animal feeding study. The study involved one of the best known varieties of genetically modified (GM) maize and the most widely used glyphosate-based herbicide. The study was published by a team of scientists led by the highly regarded Gilles-Eric Seralini who heads the Institute of Biology at the University of Caen in France.


Seralini and his team of seven conducted a lifetime feeding trial of the herbicide-tolerant maize known as NK603, a product of agribiotech giant Monsanto of the US, and of its extensively used herbicide Roundup, on 200 rats for two years. Roundup kills weeds without harming the crops. It was the first time that the health impact of a GM crop and a widely used pesticide was studied for this length of time and in a more comprehensive manner than studies done by regulatory agencies, industries or by research institutes. The two-year study was designed to correspond with the expected lifetime of a normal rat whereas the industry practice is 90-day study.

The team used 100 female and 100 male rats. In both sets, some rats were fed NK603, some the GM maize sprayed with Roundup, and the third group was given drinking water with the lowest permissible limit of Roundup. A fourth, control group was fed a standard diet of the closest variety of non-GM maize.

The results were alarming, according to the peer-reviewed paper published in Food and Chemical Toxicology, a journal from the reputed Elsevier stable. Rats that fed on NK603 or given water containing Roundup died much earlier than the rats in the control group and developed hormonal and sex-related effects. Females developed significant mammary tumours, pituitary and kidney problems, while males died mostly from severe kidney failure. Up to 50 per cent of the male rats and 70 per cent of females died prematurely, compared with only 30 per cent and 20 per cent in the control group. 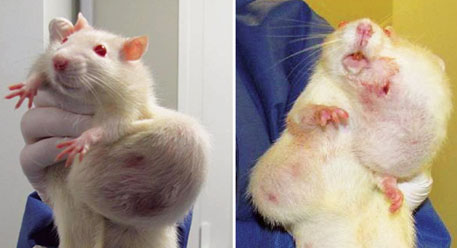 The implications are extremely serious, says a press note issued by CRIIGEN, an independent organisation of scientific experts that studies genetically modified organisms (GMO), pesticides and impacts of pollutants on health and environment, on the research results. “They demonstrate the toxicity, both of a GMO with the most widely spread transgenic character and of the most widely used herbicide, even when ingested at extremely low levels (corresponding to those found in surface or tap water).” The scientists point out that these results call into question the adequacy of the current regulatory process which is used the world over in assessing the health risks associated with such products. They, therefore, demand that the market approval for these products should be immediately reviewed and urged the extension of the usual 90-day test to two years for agricultural GMOs.

“It was surprising. We didn’t expect the kind of tumours that we saw appearing in the rats in the fourth month (industry trials end at three months) of our experiment,” says Robin Mesnage, member of the Seralini research team who was in India to attend the conference of parties to the Convention on Biodiversity in Hyderabad. “And these tumours in rats eating the Roundup-tolerant GM maize began to appear so much earlier than in the control group.”

Explaining the genesis of the experiment, Mesnage said that the €3.2-million-study was conceived in 2008 when the first of the Seralini team’s researches into the effects of GM maize varieties on mammalian health was nearing completion. Those results which analysed Monsanto’s own 13-week “safety assurance study” by Bruce Hammond et al—the results were published in the very same Food and Chemical Toxicology in 2004—had highlighted concerns over new side effects that were sex-related and dose-dependent. “Effects were mostly associated with the kidney and liver,” notes the paper by Seralini and others.

To see if the signs of liver and kidney toxicity escalated into something serious, Seralini’s team chose a chronic toxicity protocol as per OECD (Organisation for Economic Cooperation and Development) guidelines, which is the general rule. And as the current paper, “Long term toxicity of a Roundup herbicide and a Roundup-tolerant genetically modified maize”, shows this, indeed, is the case.

But the biotech industry and its cheerleaders have reacted with fury and criticisms that have as quickly been rebutted by independent scientists. Rejecting the findings, Monsanto says, “The study does not meet minimum acceptable standards for this type of scientific research, the findings are not supported by the data presented, and the conclusions are not relevant for the purpose of safety assessment.” (See ‘The company’s rebuttal’). It also makes the standard claim that “plant biotechnology has been in use for over 15 years without documented evidence of adverse effects on human or animal health or the environment.”

Seralini’s professional standing—he has written over 100 scientific articles and has been a member of two French government commissions that oversee risk assessment of GMOs and monitor commercialised GMOs—has not stopped detractors from mounting personal attacks. But support has come from ENSSER (European Network of Scientists for Social and Environmental Responsibility) which says, “The vitriolic attacks evoked by the study reveal the lack of appropriate methodologies for long-term studies to assess the effects of life-time consumption of GM foods.”

The quickest rejection of the study came from Maurice Moloney, institute director and chief executive of Rothamsted Research, who said: “Although this paper has been published in a peer–reviewed journal, there are anomalies throughout the paper that normally should have been corrected or resolved through the peer-review process. For a paper with such potentially important findings, it would have been more satisfying to have seen something with a more conventional statistical analysis.” Moloney, who is said to hold more than 300 patents, was earlier with Calgene where he developed the world’s first transgenic oilseeds, which led to the development of RoundUp Ready Canola and other such crops. Calgene was acquired by Monsanto in 1997.

In response to the criticism, Seralini told Down To Earth that: “We are surprised by the violent and rapid reactions by scientists within 24 hours. Was it because of their financial interests? Or, were they involved in the insufficient assessment of agricultural GMOs on health?” But not surprisingly, he adds, “The first reactions have come essentially from people who have not published any peer-reviewed scientific papers on mammalian or human physiological and toxicological studies. This is the case with Maurice Moloney who works on GMO development and patents, not on food safety.”

Moloney was the spearhead for a torrent of criticism from the industry and this has caused unease among independent scientists. Says Jack Heinemann, professor of molecular biology and genetics, University of Canterbury, New Zealand: “The reactions appeared shockingly quick and this is a cause for concern because I find it takes time to thoroughly read a scientific paper of this complexity.”


While most of the criticism was of a general nature, others were specific, referring to the type of rat used, the kind of statistical analysis, and the interpretation of the response to increasing concentrations of the agrichemicals, Roundup, or GM plant ingredient. But here, too, a review of the seven studies of this kind since 2004 shows that all of these used approximately the same number of rats and all were conducted on the same kind of rat (Sprague Dawley) as the study by Seralini’s team. “The 2004 study by Hammond (Monsanto’s) used marginally more rats in the relevant control group, but was in my opinion less powerful statistically because of the inclusion of ‘reference’ control lines that were not fed on the near-isogenic non-GM diet,” says Heinemann who heads the independent Centre for Integrated Research in Biosafety.

But the voices of reason have been few in this current controversy which has redrawn ever more sharply the battle lines in the GM controversy. In the US, the Council for Biotechnology Information, which speaks for the industry, describes the paper as “a bizarre study by French researchers”. It has put out a statement, among others, by Bruce M Chassy, professor emeritus of food science at the University of Illinois, as saying: “It is a well-planned and cleverly orchestrated media event. The study was designed to produce exactly what was observed and it was deliberately allowed to continue until grotesque and fear-evoking tumors developed.”

A clearly annoyed Seralini points out that to get official approval for commercialisation of NK603, Monsanto studied just 10 rats per group and used the same kind of rats. “If 10 rats is too small a number per group to reach a conclusion on safety like some of my critics are saying then NK603 and most agricultural GMOs should be forbidden.”

But while scientists are involved in increasingly acrimonious exchanges, governments have acted. Russia, for one, has temporarily suspended the import and sales of NK603 maize until the country is reassured about its safety, the consumer safety watchdog Rospotrebnadzor announced within days of the paper’s publication. It asked scientists at Russia’s Institute of Nutrition to review the study by Seralini et al and sought the comments of the European Commission on it.

France, for its part, ordered its food-safety agency Anses to quickly review the study and the Prime Minister pushed up the ante by declaring that his government would seek an immediate ban on the EU imports of the Monsanto product if the study’s findings were found conclusive. He put the scientific validation on fast track, demanding “a fast procedure, about a few weeks, to verify the scientific value of the study”.