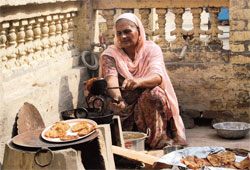 It was a busy Sunday in Chaina. Elderly women got up early to prepare dishes they had not tried their hands at for years, decades even. The verandah of the primary school in the Punjab village was spruced up and tables lined in a row and covered with starched white sheets. By afternoon the women brought the delicacies in buckets. Children milled around in excitement as their grannies laid the tables. The village in Faridkot was celebrating trinjan, a grandmothers’ pastime of old that has not occurred for 60-70 years. About 500 people turned up to savour the delicacies. The list of dishes on the menu was long. For starters, there was gur ka sharbat and thandai; bajra and moth khichri, made of pearl millet and pulses, maize porridge, makke ki roti, cholai ki saag with garlic chutney for the main course; bhoot pinna and besan halwa as dessert. The fete on August 30 was to revive the traditional gathering of village women in Punjab. In earlier days women used to gather at someone’s house in rotation after they were done with the day’s work. They would spin yarn on a charkha and do needlecraft. Song, dance and gossip followed inevitably. They would also bring home-cooked food. But the practice died with time. Readymade cloth is available in the market, so no one spins or embroiders. Non-profit Kheti Virasat Mission organized the festival to highlight the lost food habits and lifestyle. Naseeb Kaur, in her 70s, prepared gur ka sharbat—a squash of lemon juice and jaggery.

She had last prepared it some 40 years ago. “Gur ka sharbat used to be a routine drink for farmers, especially in blistering heat. It acts both as an energizer and a coolant,” she said. “Look at them, all lean and thin,” she said pointing to her grandchildren playing in the verandah of the school. “Children these days are just not fit. They drink Coke and Pepsi, all chemicals.” “I liked gur ka sharbat and thandai,” said Harmanjyot Kaur, an 18-year-old collegegoer who came to the festival with her friends. None of them had tasted the squash before. “I also liked khichri and puda, but can’t have them every day as they are high on calories,” she said. Gurdeep Kaur, in her 70s, chuckled as she divulged the secret of the distinct flavour of her puda: “The fried-cake is made of wheat flour and jaggery. Fry it in ghee for that flavour. It is usually made in the rainy season.” Her friend Gulab Kaur said the young generation finds it heavy because they do little physical work. “Children don’t play as much as they used to. Men don’t go to the fields every day. Women step out rarely. People have got used to a luxurious lifestyle and this is affecting their health,” said the 80-year-old. Bhoot pinna, dry sweet balls, turned out to be the most popular snack at the fete. “They are made of jaggery and coarse grains like sorghum, pearl millet and maize. We used to prepare them in the winters,” said Hardeep Kaur. But bhoot pinna is now confined to occasions like lohri, a popular winter festival in Punjab. People hardly make them 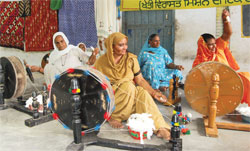 at home and children prefer fancy rewri and gazak (dry sweet made with sesame seeds and peanuts) available in the market. “Children don’t like millets, which are more nutritious than wheat and rice. Their tastes have changed,” said Hardeep Kaur. Gurdeep Kaur chipped in: “When we were young, khichdi, millet porridge and milk with ghee used to be the staple, not rotis.” Umendra Dutt, executive director of the Kheti Virasat Mission, said: “Food habits have changed from coarse grains to rice, and that is what is now grown across Punjab. Millets used to be the traditional crop of water-scarce Punjab as they require less water.” But the state promoted wheat and rice farming following the Green Revolution in the 1960s. Groundwater exploitation and contamination of food by pesticides followed. The revival of trinjan is to reconnect food security with nutrition, seed conservation and self-reliance, he said. Later in the day, women spun yarn on charkhas to the tunes of trinjan songs by Bhagwan Kaur and Lajwanti Devi, both in their 80s. No one in the younger generations had heard these songs before. Naseeb won the competition for fast weaving. “I spun all the clothes for my four daughters on this charkha, never buying a piece from the market,” said an overwhelmed Naseeb. “We even gifted charkhas to our daughters on their weddings,” she said. “It is a symbol of selfreliance— they would never have to depend on anybody for clothing.” If not through spinning, selfreliance can be achieved via kitchen gardens, said Amarjeet Kaur, the chief guest; she works with the non-profit and promotes natural farming. “People can grow vegetables and millets in their backyard and gradually take it to the fields,” she said.

It was getting dark and the food on the table was finished. As people stroked their satisfied bellies, Dutt felt reassured. “To bring millets back in the field, we first need to bring them back in the kitchen,” he said. Ã”Ã»Ã¡