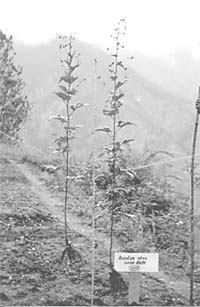 a man with a mission, Arun Kumar Badoni's life work is to put cultivation of rare and endangered Himalayan medicinal and aromatic plants on the development agenda of mountain districts in the Uttarkhand region of Uttar Pradesh. He has been able to grow various endangered high-altitude herbs without any financial and infrastructural luxuries enjoyed by scientists in government research institutes or major pharmaceutical companies.

Perhaps, no individual or institution has produced the variety and quantity of plants he has been able to. He has also been able to speed up the lifecycle of these plants. This has helped in getting farmers interested in the cultivation of medicinal plants for commercial purposes. His greatest success has been with Aconitum heterophyllum , locally known as ateesh , an endangered plant in great demand in the Indian ayurvedic industry and herbal pharmaceutical industry abroad.

Badoni's lifetime fascination with medicinal plants traces its origin to the memories of his grandfather, who was a renowned vaid (a traditional healer). His pioneering work in the field of biodiversity conservation began with the setting up of an informal organisation in 1989, aptly named sher (Society for Himalayan Environmental Research), by a group of college students with similar concerns and interests. At that time, he was pursuing a DPhil, first in tree biology and then taxonomy, at the Garhwal University. He did his thesis on the "Herbaceous Flora of District Uttarkashi".

While engaged in this research, he became increasingly concerned about the over-exploitation of many medicinal plants beyond their capacity to regenerate naturally. He identified such plants and concluded that over-harvesting for commercial purposes by major pharmaceutical companies contributed to their decline.

Badoni wrote letters to officials concerned, informing them about the deteriorating environmental conditions in the remote regions of Garhwal, and suggested measures that could be adopted to undo the damage. He emphasised on in situ (in its natural habitat) conservation of endangered and threatened species of medicinal and aromatic plants. Badoni reasoned that these plants were indicators of the overall health of the ecosystem and that, if they were disappearing, the entire ecosystem would be threatened. He also saw potential for tremendous economic benefits to local village communities, who had so far been unable to benefit from their herbal wealth. By cultivating medicinal plants for commercial purposes, they could supplement their income.

But the responses to his letters were varied. So Badoni decided to take the matter in his own hands. He pursued his dream of growing endangered species from seeds painstakingly collected from the wild. After his initial experiments had 'borne fruit', he approached the Department of Science and Technology ( dst ) for financial assistance to expand his scale of work from an experimental plot to the farmers' fields. But dst rejected his proposal. Undeterred, he plunged obsessively into the task of demonstrating that they could be cultivated on the farmers' fields by the thousands without a laboratory, fancy equipment, plant hormones or institutional backing. And he has done just that in the Tons river valley of western Garhwal.

At present, he and his colleagues have been focusing their attention on eco-camps in selected villages in district Chamoli and Dehradun to raise public awareness about the link between environmental conservation and rural development. They have also been conducting training camps on cultivation and primary processing of medicinal, aromatic and wild edible plants for village communities in the Tons valley, where sher has established a field research station. A herbal garden has also been established at a temple in Kedarnath with the help of the temple committee.

Besides his research and awareness campaigns, Badoni has authored the book, Herbal Industry for Biodiversity Conservation and Sustainable Development in the Garhwal Himalaya , and no less than 36 research papers and 13 articles. Reticent about his achievements, Badoni is at home, according to himself, "in the high Himalaya with a rucksack on my back and a camera around my neck". He lives in the town of Vikasnagar, district Dehradun, with his family, and coordinates research and other activities of sher from there.