Water doesn't stick to lotus leaves. Nature has given the plant a self-cleaning mechanism. Crack the science of it, and you have the formula for successful industrial products 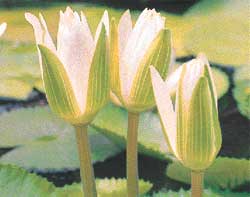 It is called the "lotus effect", or nature's principle of self-cleaning surfaces. And it could revolutionise the manufacture and use of several everyday products, particularly paints. You could have cars that don't need washing, house fronts that stay clean for years at an end, and even a reduction in the use of household chemicals for cleaning operations. All this and more, merely from studying nature's gift to the lotus plant.

Wilhelm Barthlott, professor of systematics and biodiversity at the botanical garden of the University of Bonn, Germany, is the man behind this exciting new discovery. He conducted a special study of the lotus leaf and how water cleans its surface. Its unique structure and self-purifying properties have encouraged scientists to devise ways of making long lasting, dirt-repelling products in the form of paints, roof tiles, and what have you.
The process undermines the popular belief that smooth surfaces are best at repelling dirt. When water drops on a smooth leaf surface, it shifts the dirt particles without washing them away. But the lotus is different. The waxy surface of the lotus leaf is actually quite rough. Observed at the microscopic level, it is coated with a thick bumpy layer of wax.

This conspicuous layer of impermeable 'wax', or lipids, creates an interface between the plant surface and the surrounding environment. The contact area between water and dirt is reduced, making the leaf highly water repellent, or hydrophobic. The wax is also capable of self-regeneration. When water drops fall on this surface, they roll down, carrying dirt particles with them. Even glue cannot stick to the surface of the lotus leaf. Meanwhile, the bumpy surface of the wax layer creates air gaps on the surface. These gaps prevent dirt particles from sticking to the leaf, leaving them free for the water to wash off.

Barthlott says this phenomenon occurs in some other plants as well, but is best demonstrated in the lotus. "As this effect can be beautifully demonstrated with the large leaves of Nelumbo nucifera, the sacred lotus, we call it the lotus effect. It is a nice, catchy name," he says. Barthlott and his team successfully applied this natural phenomenon to make facade paints under the brand name Lotusan, first introduced in the market in March 1999. Barthlott put in 22 years into developing this paint. His persistence brought him the German Environmental Award, one of the most prestigious environmental awards in Europe, as well as the Philip Morris Research Award in 1999. "It is high time industry and technology paid more attention to the lessons that nature has to teach, so that humans might live in closer harmony with the natural environment," Barthlott says.
"In a few years from now, we will have self-cleaning cars," says the professor. This could be just right for a country such as India where pollution, heat and dust are the bane of many a car owner. The list of products that might employ this technology is almost endless, with applications in areas ranging from the food industry and aircraft design, to medicine.

Barthlott points out that, in comparison with conventional paints, Lotusan can withstand harsh weather conditions and is effective when applied on external structures, thus reducing the chances of fungal and algal attack. This gives the paint greater longevity, cutting down expenses as well as the use of cleaning agents. "The combination of fillers (that fill the tiny gaps on the surface) gives the paint a special surface structure," says Barthlott. "Furthermore," he says, "the chemical composition of Lotusan has been improved for a better water repelling characteristics."

"We are in the process of replicating the effect into other products," says Christoph Neinhuis, Barthlott's colleague. He mentions that roof tiles were expected to be out in the market soon, followed by ceramics. "We also plan to bring out a wood paint by the beginning of 2001," he mentions. But one question follows this excitement: where do we stand with regard to the survival of the lotus plant, especially in a country like India? The lotus is believed to be indigenous to the Indian subcontinent, says Anil KGoel, former assistant director of the National Botanical Research Institute, Lucknow. Fossilised impressions have been found in Kashmir of rhizome and leaves of lotus from the Pleistocene Age (which began some 1.6 million years ago and ended 10,000 years ago).


"Though there are plenty of lotus plants found in aquatic bodies of India, there is a great cause for concern," says A R K Sastry, director of biodiversity conservation at the World Wide Fund for Nature-India. Wetlands, crucial habitats of the lotus, are highly abused and under great pressure in India. "The wetlands are not in their original state now, causing problems for their natural regeneration," Sastry explains.

The unique nature of the lotus is often altered by human activities like the use of chemicals and pesticides. "They alter the fine structure of the wax crystals, so the leaves become 'wettable'," says Barthlott. This causes dirt particles to remain on the leaf. The German scientists says this increases the risk of infection as fungi and bacteria remain on the leaf along with the particles.


In urban as well as rural areas of India, lotuses are exploited thoroughly. Garlands of lotus petals are a must for Hindu religious ceremonies. "This is one of the reasons for decline in the number of lotuses," says Sastry. Another reason for its decline is that all parts of the plant are consumed. While collecting the lotus plants from her floating garden on the Dal Lake of Srinagar, Rafiqa Banu, a resident of the lake explains: "We use almost every part of the plant. Its seeds are fried to be eaten, the leaves are crushed to extract the juice and the rhizome is used for medicinal purposes." The stem can be spotted at vegetable vending kiosks.

Overexploitation of the plant creates another problem. Scientists have found out that the lotus plays an important role in denitrification, helping maintain the nitrogen balance in the waterbodies. Besides consuming a lot of nitrogen, the plant also creates a healthy environment for the bacteria that help in breaking down nitrogen.