So does government, in a rush for profits from a medicinal herb 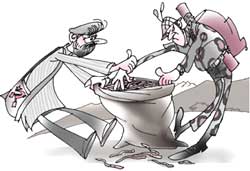 Did Nepali Maoist rebels make (Indian) Rs 3.15 crore last year from the trade in medicinal herb Yar Tsa Gumba (Cordyceps sinensis) in Dolpo, a mountain region in Nepal's Midwest? Yes, say local sources, quoting the figure. The government doesn't know the exact amount of profit, but it has concluded that Yar Tsa Gumba is a major source of income for the rebels. And that is why it initiated 'Operation Herb' in Dolpo in August 2004. The government deployed a special task force -- a joint force of the Royal Nepal Army, armed police, Nepal Police and the intelligence bureau -- that helped it collect around (Indian) Rs 10 lakh from this region last year. Prior to this, the government's collection record was nil.

According to local experts, Cordyceps sinensis is a traditional and precious dried medicinal herb. It was highly recommended by ancient Chinese medical practitioners as the most effective cure for all illness. Owing to the herb's high efficacy in curing various diseases, it is well known as an important nourishing tonic. However, as sourcing and gathering the herb is difficult, its supply often falls short of demand. In Nepal it is called 'wonder herb' and 'Nepali Viagra'.

Yar Tsa Gumba is available in the western highlands of Nepal, and in the collection season -- mid-August to mid-October -- is a major source of income for local people. The normal practice in this trade is that the exporter gives an advance to the local trader, who collects the herb from locals. Earlier, the government used to tax either the local trader or the exporter; the Maoist rebels tax both.

"The size of this business is very big, you can not calculate it just by looking at the revenue collected by the government," says an herb exporter based in Kathmandu, requesting anonymity, "It is 100 times more than the government statistics. You can sell a kilogramme (kg) of Yar Tsa Gumba for (Indian) Rs 1 lakh to an Indian trader; 1 kg contains only 300 to 500 pieces, and that is why it is easy to smuggle. And, you have to give the local collector nothing but just (Indian) Rs 20 to Rs 30." It's good profit; "that is why the Maoists are after this business," he told Down To Earth.

A trader from Dolpo has paid money to the government for this year -- the collection season's just begun. It is the first time he's taking the legal route. He told Down To Earth that he was encouraged to go through the legal route because the government is ready to provide free transportation -- a free ride by helicopter, the only means of modern transportation available in the region. So is 'Operation Herb' also on this year? When asked, the Royal Nepal Army refused to comment.

According to a source in Nepal's ministry for forest and soil conservation, the government has reduced the royalty it used to levy on exporters based in the Dolpo region from (Nepali) Rs 20,000 to Rs 10, 000 (Indian Rs 12,382 to Rs 6,191) per kg of Yar Tsa Gumba to promote legal business in the herb. The source says that after consulting the local administration and traders, the government is planning to reduce it to (Nepali) Rs 5,000 (Indian Rs 3,095) within a year, to further encourage local traders to do the business legally. But, as the source says, "The main aim of this policy is to reduce the income of the Maoists."

"Now we have pressure from two sides, government and the rebels; both want us to pay them," says another trader in border town Nepalgunj, a major transit point for the herb trade route into India (herbs on this route reach Lucknow). "The Tibetan traders used to provide us the advance amount, but now the situation is changed. They insist on paying after they have received the herb. Because of the security problem, they want us to cross the Nepali border into India or China and provide them the herb; it is now hard to do this business." In India, Tibetan traders operate out of Uttaranchal and Himachal Pradesh. In these states, too, Yar Tsa Gumba is collected every year; such is the rush here that experts fear the herb might be harvested to extinction (see 'Yar Tsa Gumba', Down To Earth, October 15, 2003).

In Tinker, a small village on the India, Tibet and Nepal border, a Maoist commander named Ramesh told this reporter that they helped smugglers cross the border into Tibet and got (Indian) Rs 25, 000 per kg of Yar Tsa Gumba. "In three months we helped to smuggle 30 kg from this point to Tibet," he said.