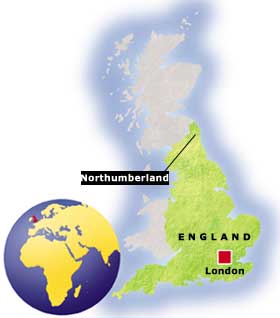 Northumberland's rolling moorlands, in the northern-most corner of England, are home to Britain's richest concentration of prehistoric rock art. Since the early nineteenth century, over a thousand carvings have been rediscovered nestling in the wilds. More may yet lie beneath the rambling undergrowth covering Northumberland's moors. Etched on to slabs of indigenous rock, these mysterious carvings -- which many archaeologists contend were created by nomadic Neolithic and early bronze age people between 3,500 and 6,000 years ago -- have intrigued scholars for centuries. Northumberland's trove of monuments includes rock carvings, stone circles, and burial cairns, many showing the 'cup and ring' formation distinctive of northern British rock art. These cup-shaped depressions -- engraved on stone slabs with crude tools of flint or stone -- sometimes appear surrounded by concentric circles, joined by interlocking grooves radiating from the core, or unravelling into complex spiralling forms.

But what do they mean? Myriad theories abound as to the origins of these abstract carvings. Some scholars believe the proximity of many rock carvings to cairns and burial mounds, and the enshrouding of many within the cairns, suggests the ring symbols may be linked with Pagan burial rites and the concept of an after-life or ancestry -- the cyclical pattern of life, death and rebirth that was intrinsic to Pagan belief. Others attach cosmological and astronomical symbolism to the enigmatic carvings: the engraved symbols are deemed to represent the patterns of the night sky, or early depictions of the sun encircled by planets and moons.

The most widely accepted theory is that rock art is closely linked with ancient religious ritual and the nature worship which was central to Pagan beliefs. Carvings are often found on standing stones and at stone circles, places which scholars believe were used for ancient sun worship, or celebrations of fertility in people, animals, and land.

The project is the brainchild of international rock art expert Stan Beckensall, whose personal research archive, compiled over the past forty years, is the largest regional rock archive in Britain. It comprises academic and popular articles, drawings, photographs, video and radio recordings, written descriptions, grid references, and historical information about interest and research into the rock carvings going back to the 1800s. In 2002, together with archaeologists Arun Mazel and Lindsay Allason-Jones of Newcastle University, uk, Beckensall planned to digitise the archive, and upgrade it through more fieldwork and data collection. Funding by the uk's Arts and Humanities Research Board enabled the project, entitled Web Access to Rock Art: the Beckensall Archive of Nothumberland Rock Art, to start in July 2002. Last month, the collection was unveiled in cyber space.

Six thousand images of rock panels and standing stones are now available to scholar and student alike. Using the well-known global positioning system technology to fix the panel's exact locations, the scientists undertook studies dealing with the environmental setting and archeological context about the rocks. The web site incorporates the results of these studies. For example, each rock panel has sub-categories about rock types, grain compactness, surface bedding plains and surface topography. Patterns of distinctiveness within regions are explored, enabling comparisons to be drawn between different areas. The website also features 360 views of the landscapes surrounding the carvings. Mazel expounds the importance of the cyber rock site: "It's incredibly important that we are aware of our heritage, not least because it helps us understand our own origins and identities. Our team has spent the last few years on a prehistoric 'adventure' and now we're at the stage where we can share our finds with others."

The web site demands no subscription charges, and accommodates browsers from all walks of life. It includes an interactive zone featuring video and audio clips for younger browsers, alongside an extensive bibliography of rock art for specialist users.

"The web was the obvious medium to reach out to the twenty-first century historians, amateur and professional alike. I am sure it will lead to enormous enthusiasm in these relics," says Beckensall.


At the heart of the project lies a commitment to the conservation of Northumberland's rock carvings, and the country's rock heritage. Hundreds, if not thousands, of rock carvings were lost during the sandstone quarrying and field clearances which have been decimating Northumberland's moorlands since the Industrial Revolution. Wandering ramblers, rock climbers, and vandals also threaten the carvings. Elsewhere in Britain, carelessly planned railway lines and new tarmac roads plough through the sacred sites.

Beckensall and Mazell see the provision of detailed information about rock carvings and their significance as integral to protecting the carvings for future generations. The project aims to awaken cultural consciousness. It seeks to, "Create better understanding of the rock's long-term susceptibility to erosion." "We have tried to show how the carved panels and motifs are obscured by natural and artificial processes, and have also highlighted the requirements for future management and conservation," says Mazel.


Fittingly, the reverence for the environment which these rock carvings are conjectured to represent, is now mirrored, thousands of years later, by their careful preservation by two dedicated archaeologists from Newcastle. "I'm sure the artists who hammered their symbols on the stones thousands of years ago, on their windswept moorland settlements, could never have imagined their work would become such a worldwide phenomenon as this!" says Beckensall.

The rock carvings can be viewed at www.rockart.ncl.ac.uk or in their natural habitats in Northumberland.