Human excreta is rich in soil nutrients. In a year, one person craps 4.56 kg of nitrogen (n), 0.55 kg phosphorus (p) and 1.28 kg potassium (k)—enough to rejuvenate a 200-400 sq m patch. A billion can produce six million tonnes of NPK, one-third the total fertilizer usage in India 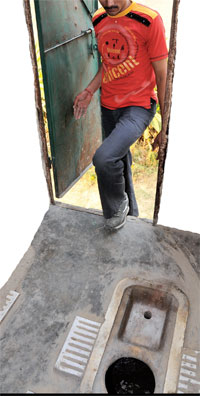 Faeces is fertility: not only is this a perception that can be comprehended, but it is also a reality; it delivers gross profit. Shyam Mohan Tyagi, a 30-year-old history postgraduate, began nurturing his crops with a diet of urine and decomposed human faeces. He collected these from a special community toilet in his village Asalatpur in Ghaziabad. The toilet was designed to separate faeces and urine, so the excretions could be used as manure. Nobody in the village did, till Tyagi. Now, everyone’s eyeing the ecosan toilet in the village, set up by Delhi-based non-profit Foundation of Development Research and Action. All credit to them. More credit to this 30-year-old, who broke village taboo. He could break it because of that old principle: gross input. Earlier, he used to spend Rs 1,500 on applying di-ammonium phosphate to seedlings, and Rs 1,000 on grown crops and vegetables. “Now I see the growth on the crops in my field is much better once my son started using urine,” said father Moolchand Tyagi. “Production of this kind of local manure should be increased to meet the demand.” Villagers agree. Now they want household-level ecosan toilets. To defecate or urinate in privacy— and to make manure that reduces cost of cultivation. Art is nature’s call Toiletry is artistry, in a third world that cannot afford to waste urine, faeces…or water. Kudos, therefore, to Vinod Tare and his team at the engineering department of IIT, Kanpur for developing a toilet that reuses the water used to flush that ablution, also reusable. It is a model toilet. For mass use. They made it keeping trains and community toilets in mind. The toilet is simple, because it challenges perception: it does not matter what kind of water is used for flushing. The water gushes in, guiding the excreta towards a separator. Here, toilet design so functions that waterand- urine and solid waste go separate ways. That liquids, collected separately, filtered, is pumped back into the system. The solid waste? Used for compost, after the tank it is stored in is emptied out. The urine? Can be evaporated to recover fertilizer. The water? Collected in an overhead tank, after passing through pipes fitted with microfilters made of high-quality poly vinyl chloride which clean the fluid, do not cost more than Rs 100 and last a year. The stink? In the toilet, an Indian-style one where you squat, instead of lolling about on it as on a WC, smell traps fitted in the pipes carrying the water and in both kinds of tanks take care of this privately-resigned to, but publicly-hated olfactory phenomenon. It’s simple, and challenges perception. Come to think of it, isn’t the bathroom the infrastructure around which the rest of the loving house is made?