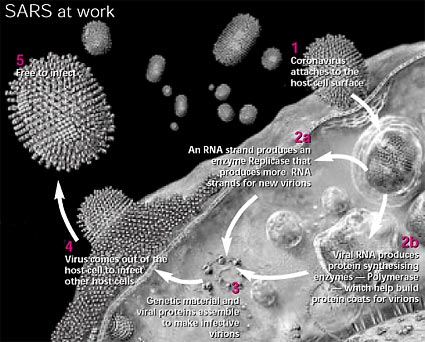 Several strains of influenza or flu have been named after Guangdong province, where the first sars cases surfaced. This dubious distinction stems from the agricultural practices prevalent in the region. Rice fields support ducks and chickens, which feed on pig waste. The waste of one becomes the food of the other, resulting in a perfectly self-sufficient nutrient cycle. Helped by their ability to exist in faecal matter, conditions become ideal for viruses to evolve very quickly in different animals.

Luis Villarreal, director, Center for Virus Research, University of California, Irvine, usa, believes that China's otherwise ecologically sound agricultural systems facilitate recombination between silent viruses in farmed species and other organisms. This, he says, increases the likelihood of the emergence of new human infectious agents. "The domestication of the duck has brought a 'harmless' virus from its natural, aquatic avian habitat into the farmyard, with economic consequences for the poultry industry and serious health implications for humans," says Kennedy Shortridge, professor of microbiology at the Hong Kong University.

If this is the case, then highly potent zoonotic infections like Ebola kill many, but appear sporadically. sars is a zoonotic -- animal to human disease that belongs to the Coronavirus family. Often zoonotic viruses become less virulent over time and become part of the normal disease cycle of humans. sars could be one such example. The virus spreads today much faster because of the integration of the world air travel, large-scale migration and crowding in cities. Hong Kong, the airline hub of Southeast Asia, was successfully exploited by the coronavirus to spread to other countries.

Different types of flu viruses mutate in the body of a duck, pig or human. A new strain is considered created when an imperfect version of the original survives and re-infects its hosts successfully. Chances are that the previous strains would confer cross-immunity, but very often some viruses mutate once in each host or each generation thereby acquiring additional virulence. This genetic lottery makes viruses deadly.

The first coronavirus was isolated in 1937 which caused infectious bronchitis in birds, especially in chicken flocks. Since then researchers have found its cousins to infect cattle, pigs, horses, turkeys, cats, dogs, rats, and mice. Most coronaviruses cause either a respiratory or an enteric disease, and some do both. Coronaviruses are relative giants in the virus world. Their genome has more than 30,000 nucleotides and have a complex two-step replication mechanism. Like many rna viruses, it uses the host's nuclear material to produce all viral proteins. But coronaviruses have up to 10 separate genes and use a complex enzyme called replicase, to produce a series of enzymes. These use the rest of the genome as a template to produce a set of smaller, overlapping messenger rna molecules, which are then translated into the so-called structural proteins -- the building blocks of new viral particles.

There is another complication related to influenza, quite similar to the current sars problem. Varying population density and age structures may allow for coexistence of two strains. Changes in population density or transmission potential can alter pathogen virulence. Similarly, different people of different ages have different genetic make-up which make some susceptible and others not. The phenomenon of 'superinfection' by multiple strains, where one strain can infect a host already infected by a related strain, has been confounding scientists. Co-existence means the viruses can jointly manipulate the immune system and form a mechanism to evolve into new forms. Super-infection is a prerequisite for recombinant viruses and, therefore, for new strains of influenza-like viruses. Several strains of sars, if it follows an infectious pattern as the flu viruses, can be assembled in a single generation.

In September 1999, in a seminar organised by the us Centers for Disease Control and Prevention (cdc), based in Atlanta, Georgia, Guangdong was described as an influenza "hotspot". It was said to be the place of origin of the chicken flu virus that caused deaths and widespread panic in Hong Kong between March and early December 1997. The virus was identified as h5 n1 (see: Down To Earth, January 15, 1998). In November 2001, the European Commission's (ec) Health & Consumer Protection Division found food contaminated with avian influenza strains. In this report cdc had pointed towards a need for an effective surveillance system. It is unclear if China lacks a national surveillance system, or if sars is the result of government policy of information control and clamp down.

According to cdc, China has been a source and reservoir for many other recent epidemics and outbreaks. Hantaan virus, the cause of Korean haemorrhagic fever, causes over 100,000 cases a year in China. In 2002, the Crimean Congo haemorrhagic fever and new varieties of pertussis (whooping cough) have re-emerged here.