Kinema is the best and cheapest substitute for animal protein 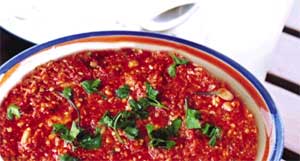 
A popular traditional food of the eastern Himalayan region is the kinema. It is nothing more than fermented soybeans, but is a good source of vitamins and minerals. Most importantly, it is the cheapest source of protein in the region. It also helps digest other foodstuff. It is stringy, gooey and deep brown in appearance.
Kinema derives its name from the Limboo word kinambaa (ki means fermentation and nambaa denotes flavour). Limboo is an ethnic community, found in parts of Nepal, Sikkim and Darjeeling. It is assumed that the Limboos started kinema's production and consumption. Interestingly, other ethnic communities of the eastern Himalaya have evolved their own versions of kinema . In Sikkim, the Lepchas consume it as satlyangser and the Bhutias as bari. It is known as akhuni in Nagaland, hawaijar in Manipur, turangbai in Meghalaya and bekanthu in Mizoram.

Kinema is commonly consumed along with boiled rice. It can also be eaten as pickle or chutney. Women mostly sell it in the weekly markets called haats. Raw kinema is packed in leaves of Ficus hookeriana tree, tied with straw. The shelf life of fresh kinema (without refrigeration) is two to three days during summer and a maximum of one week in winter. Kinema can also be sundried and stored for several months. Fresh kinema contains varied concentrations of several b group vitamins -- thiamine (b1), riboflavin (b2) and niacin (b3). It is also packed with minerals such as calcium, copper, magnesium, manganese, potassium, phosphorous, zinc and trace amounts of cadmium, chromium, lead, nickel and sodium. During its fermentation process, soyproteins are hydrolysed by the proteolytic enzymes produced by Baclillus subtilis into peptides and amino acids, enhancing digestion.

Sarikah Atreya is a journalist based in the Northeast