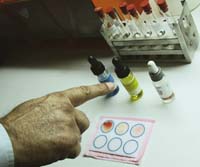 FIVE-YEAR-OLD Arvind Baghel has a hole in his heart and requires urgent surgery. Preparations for the operation have been underway at a hospital in Bilaspur, Chhattisgarh--where Arvind stays--for the last few months. But there's a major hitch Arvind is of the Bombay blood group. It's a rare blood group. In 2005, when a woman in Hyderabad required this blood type, physicians at the Nizam's Institute of Medical Sciences found that only 11 people of the Bombay Blood Group have donated blood since 1977.

There are around 200 rare blood groups like the Bombay Blood Group, which defy slotting into the two systems used for making routine blood transfusions the abo and Rh systems.

The abo system is called the Landsteiner classification and draws from a discovery made by Karl Landsteiner.In 1901 this Austrian physician found out that people have slight differences in their blood because of the presence or absence of certain protein molecules called antigens and antibodies. The antigens are located on the surface of red blood cells and the antibodies are found in blood plasma. Landsteiner had received the 1931 Nobel Prize in medicine for his discovery.

The Rh system divides blood groups on the basis of presence or absence of Rhesus proteins. Only 5 per cent people lack these proteins and they are of a negative blood group.

During routine grouping, this blood group is categorised as o group because it displays an important property of the o group it doesn't have antibodies against the a or b antigen. This characteristic has earned o group the distinction of the "universal group" it can be transfused onto people with any blood group. But the universal donor is no good when it comes to the Bombay group. For it has antibodies which act against the antigen found in all common groups the h antigen.

Such characteristics also bedevil other rare blood groups. The Duffy negative blood group, for example, does not have the Duffy antigen, Fy. The group occurs more frequently in people of African origin and many experts say, it's a mutation to prevent people in malaria-endemic regions from the disease--the Fy receptor is needed for the malaria parasite to attack. So, some people of such origin require blood that is donated by people of their ethnic type.