The rise and fall of a chemical

DDT use goes back to World War II

The rise and fall of a chemical 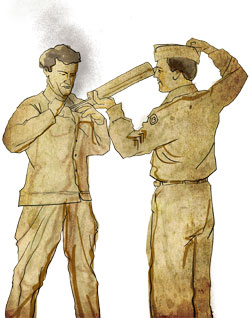 In october 1943, the Allied Forces mounted an attack on Naples in Italy. World War II was in its last stage. An uprising, a few months back, had overthrown Italy’s Fascist dictator Benito Mussolini. But Italy’s anti-Fascist movement had still to contend with the Germans. The Allied attack was a success. Naples was liberated. But the retreating Germans laid waste to Naples’ water and sewer system as punishment for the city’s uprising against occupying German forces. A city of over two million people had been left without sanitation. By November, Naples was struck by an epidemic: thousands of Neapolitans were infected with typhus, with one in four of those contracting it dying of the lice-transmitted disease. The dead were so numerous that bodies were put out into the street by the hundreds to be hauled away by carts. General Dwight Eisenhower, the leader of the Allied forces, contacted Washington and made a desperate plea for help to contain the disaster.

Typhus was a known killer of civilian population during wars. But US Army’s Office of Scientific Research and Development (OSRD) was prepared. In 1942, the agency was contacted by Victor Froelicher, New York representative of chemical major, Geigy. Froelicher informed OSRD about a recent discovery by his Swiss colleague, Paul Müller. The scientist was looking for an insecticide to control cloth moths when he sprayed a small amount of DDT into a container and noted the slow but sure way it killed flies. OSRD experts were quick to recognise the importance of DDT. Diseases were as much a threat as the Axis forces. In the war on the Pacific front, the US army was losing more men to malaria than to the Japanese. In Southern Pacific, the entire 1st Marine Division was rendered unfit for combat by the insect-borne disease. Geigy’s Cincinnati factory and then the giant DuPont chemical company were given contracts to produce the new insecticide in large quantities. The pesticide that had stemmed malaria in the Pacific was now deployed to check the typhus pestilence in Naples. Dusting stations were set up around the city. By February 1944, the epidemic was under control.

The success was so remarkable that the Allied High Command declared, “From now on, DDT marches with the troops.” Near the end of World War II, England’s Prime Minister Winston Churchill noted the importance of DDT. “The excellent DDT powder which had been fully experimented with and found to yield astonishing results will henceforth be used on a great scale by the British forces in Burma and by the American and Australian forces in the Pacific and India in all theatres,” he said.

Müller received the Nobel Prize in Medicine in 1948. However, as DDT use increased, there was a growing murmur about negative health effects that might be associated with the chemical. By 1962, the murmur had become a roar with the publication of biologist Rachel Carson’s Silent Spring. The book incriminated pesticides like DDT in endangering the environment, wildlife and humans. The book was controversial. DDT’s supporters argued that Carson’s was a case of bad science and there was no direct evidence against DDT. But Silent Spring spurred the environmentalist movement in the US, ultimately leading to a ban on DDT use in 1972, except in cases where it was necessary for public health (for instance, curbing epidemics). Most countries have now enforced a similar ban on DDT use.