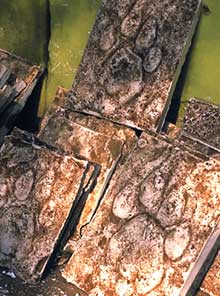 In Ranthambore this year, up to 18 tigers are missing. On February 2, 2005, the Delhi Police seized 39 leopard skins, 42 otter skins, and two tiger skins. Did they belong to Sariska? Today, Project Tiger cannot fulfil even its limited objective: ensure a viable tiger population by containing factors that contribute to decline in population.

Forest departments countrywide lack the human-power and infrastructure to fight poaching, despite the substantial Project Tiger budget. The 10th five-year plan earmarks Rs 150 crore for it, up from Rs 70 crore in the 9th five-year plan. In 2001-2002, the Union government released Rs 19.4 crore to states to implement the project. But very little percolates to the field. Every year, Central funds are returned unutilised from many reserve forests, because states do not cough up their share. "Some states like Bihar, Assam and Tamil Nadu are a problem. Other states release funds, but the delay is so much that most cannot be utilised. We try to push them. But in a democracy you cannot force anyone," says Rajesh Gopal, director of Project Tiger, Union ministry of environment and forests. The indifference is also evident from hundreds of vacancies, insufficient vehicles, arms and communication facilities. "Even if you provide them with new vehicles they get transferred to the headquarters located in metropolitan areas," asserts P K Sen, director, Tiger Programme, World Wildlife Fund, New Delhi, and ex-director of Project Tiger.

Could inspirational leadership help? But most of India's state-appointed tiger reserve managers are not trained in wildlife. In this respect, Gopal admits, "We are helpless. At the most we can stop their funds, but that doesn't make much of a difference. Nobody but the tigers would suffer." But even when funds are available, tigers continue to suffer! Sen, being an ex-director of Project Tiger has another angle: "If the centre stops funds, then the state will be given a chance to blame the Centre for the failure of Project Tiger. Why should we give them this opportunity?"

In places like Rajasthan, the situation is more alarming because forests are degrading, making wildlife highly vulnerable. But Gopal refuses to acknowledge this. "The forest cover in most areas is increasing. Sariska, for instance, is the most resilient habitat and it has survived despite so much pressure." He may have a point. But this only deepens the mystrey of the missing tigers.

At present the government's claims about tiger population and forest cover cannot be scientifically verified. "Nobody is allowed to conducted research in the reserves. Even if permission is granted, ten thousand hurdles are posed and we are even accused of killing the animals. Ullas Karanath, a renowned tiger expert, has 18 criminal cases against him. How can one except tiger science to prosper in such a state of affairs?" asserts R S Chundawat. Gopal is quick to refute this. "We have wildlife experts on prestigious committees to save wildlife. But till now, what have they done? People are indeed given opportunity to work in a reserve for 6-7 years. The results help people earn funding and awards. The park is in the same condition."

Wildlife management has certainly become a mud-slinging affair, with nobody really interested in the animals. Gopal is convinced the situation will soon reverse, once the gis system is introduced. He may be right. But, in addition, what about willingness, the motivation and the commitment to protect wildlife -- both on the part of wildlife experts and officials?

In March this year, the prime minister of India will reportedly preside over a meeting of the National Board for Wildlife, one of India's foremost bodies on conservation matters. At this meeting, surely the primary agenda ought to be a review of Project Tiger. After all, since its inception, this project has not gone any such scrutiny!