Tiny forgotten villages teach India a firsthand lesson in governance. Down To Earth reporters and photographers fan out to six states to discover how villages have kept their date with history. And it’s not August 15

With the monsoon, the world shrinks for the 25 villages in Visakhapatnam district’s Kamyapeta area. Tucked deep in the Eastern Ghats and surrounded by numerous seasonal streams, the 2,500-odd residents of these villages remain cut off from the rest of the world for close to eight months. “If we don’t move out, we will starve,” says Manmad Rao, a resident of Kamyapeta village. Without a road they cannot access the market to sell their forest produce and foodgrains.

When the Andhra Pradesh government started constructing a bridge over a seasonal river last year, there was jubilation. The world touches Kamyapeta now. But the story is not that simple. The villages suffered for more than five decades, as they didn’t exist in the government records. The government doesn’t recognise them and therefore, denies them any support. “We were nobody’s children. Anybody could threaten and misbehave with us,” says Rao. The residents approached the government officials several times only to be driven out by police. Things did not move till one fine morning in March 1999. 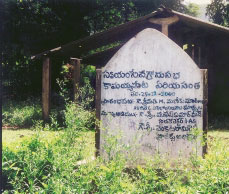 An innocuous stone slab appeared at the entrance of Kamyapeta, declaring it a self-ruled republic. “Since then, our writ runs large,” says Rao, who now visits other villages to propagate self-rule. In their first meeting, the villagers asked the government to construct a bridge and give up control over what they believe is their resources: thick forest, land and numerous water sources. Within three years, the state government started constructing the bridge with a budget of Rs 2.5 crore. Though the government still doesn’t acknowledge these villages, officials never dare to miss any summon from the gram sabha (village assembly). 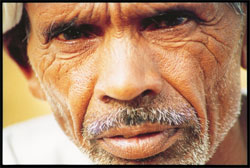 In fact, Kamyapeta has gained independence for the second time. Home to the legendary tribal freedom fighter, Marie Kamaya, it joined the freedom movement to save its forests and land from British logging companies. Marie’s land and house were confiscated and the village was declared ‘criminal’. When India attained independence, Marie thought the village’s traditional governance system would be restored.

“But nothing changed. Earlier we were exploited by the British, now it is the forest department,” says Marie Ramana, son of the freedom fighter. “When we declared self-rule, my father’s dream came true,” he says. Kamyapeta’s second independence is, in fact, a realization of Mahatma Gandhi’s cherished dream of gram swaraj (village republic).

The stone slab, a symbol of the 25 villages’ republic status, is also making appearances elsewhere in the country (see map). Mostly in villages scattered across India’s poorest regions and yet untouched by the fruits of the first Independence. A conservative estimate based on different reports shows that close to 1,500 villages have declared themselves village republics. In these villages, residents control their natural resources — forest, land, minerals and water sources. 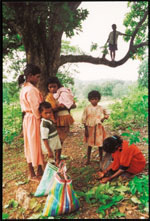 They have also formed effective institutions to manage these resources. They plan, execute and resolve all affairs inside the village. Government officials and programmes are accepted only when the gram sabha approves them. In many such villages, the forest department, the police and other officials are just restricted to executing programmes chalked out in village meetings.

Everywhere the desire for self-rule comes from the threat to livelihood. Like the 125 villages inside the Rajiv Gandhi National Park in Karnataka’s Nagarhole. When the government declared their traditional home as a national park, it meant evacuation. What the 40,000-odd residents did was to declare self-rule and take control of the area. A taskforce was set up in each village to work out the modalities for self-rule. Barriers were erected with signboards directing outsiders to seek permission of the yajaman (traditional chief) prior to conducting their business in the village.

Such are the strong linkages of these village republics to control over natural resources that they can be termed as natural republics. For these republics, the freedom struggle means control over forest, land and water. “The struggle for self rule in every village emanates from the issue of managing natural resources as it is crucial for their livelihood,” says B D Sharma, convener of the National Front for Tribal Self Rule and former commissioner of National Commission for SC and STs. “Declaring self rule is natural for these villages as it ensures their livelihood from forest and land,” says Bina Stanis, an activist based in Hazaribagh, Jharkhand. The more the government has control over these resources, the more assertive are the villages. In Balrampur block of Chattisgarh’s Surguja district, residents of 20 villages fought over the rights to minor forest produce. Last year, they did not allow the forest department (FD) to take timber from the government forests. After months of conflict, the FD had to pay a ‘tax’ of Rs 5,000 to get the timber. These villages are now on their way to self-rule.

Taking cue from the constitution’s Fifth Schedule — specified tribal-dominated areas in nine states which give local communities administrative power over local resources like minor forest produce, water and minerals — in certain areas, these villages are adopting their own constitution and implementing it through the gram sabha. In Rajasthan’s Dungarpur and Banswara districts, villages are taking control over forest and mining after declaring self-rule. A movement called gramganaraj (village self-rule) is spreading throughout the state’s tribal dominated areas. The first gramganaraj, village Talaiya in Gugunda tehsil, declared self-rule in 1997 to take control over a pond, which was located in the protected forest under the FD.

The villagers wrote to the FD that either they allow residents to use the pond or they would forcibly take over. When the FD did not act, the residents grabbed the pond. Today, the gram sabha manages the pond and the forest. “A special feature of these villages is that after declaring gramganaraj, a shilalekh (stone inscription) is placed inside the village with the new constitution inscribed on it,” says Bhanwar Singh of Udaipur-based Astha, an NGO working with tribal communities. 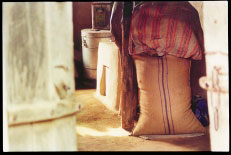 Interestingly, most of these self-ruled villages are located in the scheduled areas. Traditionally and constitutionally, these villages are entitled to autonomous status. In Jharkhand, which has been without panchayats for the past 23 years, selfrule is taking shape. If one drives from the capital Ranchi towards the Karra block, there are more than 178 villages that have declared themselves as republics. In the Ghatsila block of east Singbhum district, there are 800 such villages, according to an estimate of the National Front for Tribal Self-rule, a movement campaigning for tribal self-rule.

For these villages, December 24 is more auspicious than August 15. “After the Panchayat (Extension to Schedule Areas) Act (PESA) came into effect from the December 24, 1996, we have a new lease of life,” says Kushal Horo, a resident of Masmano village. This act is a radical piece of legislation, which gives virtual control over all the resources to the communities in the scheduled areas. These villages have adopted PESA and merged it with their own traditional systems of governance to manage village affairs (see box: The state of power sharing).

In all these villages, there is one formal institution — the gram sabha. And without waiting for the governor’s definition of a village, people have drawn their village map. The result: even a small hamlet comprising a few households now has its own gram sabha. While the gram sabha has become central to such republics, what keeps them united is the issue of livelihood. While in comparatively new villages with self-rule the gram sabhas directly monitor village affairs, older villages like Seed in Rajasthan and Mendha in Maharashtra have formed different committees to look after different resources in the village.

“In these villages, natural resources and their equitable distribution form the core of governance,” says Bhagwan Majhi, a leader of Kucheipadar village in Rayagada, which has declared self-rule. Many of these villages have chalked out their development road map. Due to direct intervention of the gram sabha, many villages have evolved innovative solutions to local problems. For example in Kucheipadar, villagers have a community labour participation programme for cultivation in private lands to tackle labour shortage.

And to do away with water scarcity, a stream up in the hill has been diverted to the village through a complex network of trenches. “Innovations are natural when people decide for themselves,” says Ravi Pragada of Samata, a Hyderabad-based NGO.