The secret gardens of Malabar

An English translation has been made exactly 300 years after the Hortus Malabricus was written, new, sinister designs seem to lurking behind it - biopiracy

The secret gardens of Malabar 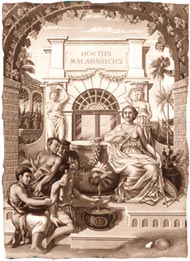 The Dutch East India Company was formed c 1602. As the Dutch Armada set sail for the East Indies from Amsterdam, surgeons and apothecaries on the fleet were instructed by the great European renaissance botanist Carolus Clusius "to bring, laid between paper, branchless carrying leaves and fruits" foremost of commercially important spices and fruit trees but also from any "kind of trees that seem strange". The medical fraternity was also instructed to make notes on the habitats they visited. Setting up colonies and commercial ventures in the East had a concomitant mission: gathering knowledge about 'newly discovered' lands. This extended to appropriating 'useful knowledge' of the natives. Empirical fact-gathering was enormously privileged in the intellectual milieu of seventeenth century Europe, experimentation in botany and medicine an abiding passion for many. And the colonies with their largely untapped natural bounties became veritable treasure troves for this mission. Apothecaries' gardens were established at European universities and increasingly stocked with plants imported from distant lands. These gardens showcased the expansion in European knowledge of the global environment; they also became the first sites to classify plants on a global basis.

A little over a hundred years after Clusius's exhortation, Hendrik Adrian von Rheede, the Dutch governor of Malabar, has just finished compiling a monumental 12-volume study: the Hortus Malabaricus or the Garden of Malabar. The study includes 740 plants of 17th century Malabar. It is almost a superhuman feat: the finely illustrated volumes are finished in a twenty-five year span, between 1678 and 1703.

The Hortus was written in Latin, the accepted language for scientific work in Europe at that time and also employed three other scripts -- the local Malayalam, Arabic, Sanskrit. Plant names also appeared in the Portuguese and Flemish languages. The volumes are replete with copious introductions, dedications, references and certificates given by or for people ranging from Rheede himself to the native physicians he relied on.

The book was in some measure the product of political rivalry between Van Rheede and General Ryklof van Goens, who was bent on establishing the Dutch colonial capital at Colombo rather than Cochin. Van Rheede's wanted to prove Malabar's superiority in terms of ready supply of valuable spices, cotton and timber. More importantly he was able to show that many valuable drugs purchased in European cities, including those used for the treatment of Dutch officers in the Indies, were actually made from medicinal plants originating in Malabar and exported through Arabian and other trade routes. This worked. The Dutch government sided with the Cochin governor, even as his publication created a stir in Europe's scientific and political circles, further stimulating rivalry for colonies in India.

How did Van Rheede accomplish his monumental feat? A quintessential Dutch renaissance man, his father was a forester and he inherited a love for nature. His biographer notes of his fascination with the flora in Malabar; he also set up a laboratory to process cinnamon oils. The Hortus was strongly connected with a shift, in the Netherlands, towards depicting the natural world as accurately as possible.

For Rheede accurate depiction meant not just meticulous attention to detail but also scrupulous regard for authenticity. It took him only two years to reject the methodologies for plant description represented by the Vridarium Orientale of Father Mathew, an Italian Carmelite priest. The missionary had come in contact with the Governor in 1673 and had presented him a copy of his study. But, the priest's efforts were disqualified on grounds of alien methodology. And by April 1675 the Dutchman started relying entirely on Malayali sources -- initially to the expertise of three Brahmins, Ranga Bhatt, Vinayaka Bhattt and Appu Bhatt. But the wily Rheede was soon to realise that the botanical knowledge of the Brahmins was in fact entirely dependent on the restatement of aphorisms from old texts. This knowledge was merely academic. It thus made sense to bypass the Brahmins.

For field collection, therefore complete reliance was placed on "certain men who were experts in plants, who were entrusted with collecting for us finally from everywhere the plants with the leaves flowers and fruit for which they climbed the highest tops of the trees." Van Rheede's frequent peregrinations into the countryside had bought him into contact with Ezhava collectors of the toddy tapper caste. Amongst them were families of Vaidyar traditional doctors -- highly esteemed medical practitioners, whose occupation was passed down in a lineage from father to son, along with bulky collections of palm leaf manuscripts containing hundreds of years of accumulated medico-botanical knowledge. Ezhava knowledge fitted the Dutch governor's bill splendidly.

Enter Itty Achuden. Very little is known of him, except that he was a Vaidyar physician and had inherited enormous medical knowledge from his forefathers -- both oral as well as palm leaf manuscripts. The Company interpreter Emanuel Carnerio roped Achuden into the Hortus project. According to historian Richard Grove, Achuden and his fellow Ezhava tree-climbers actually selected the plants that were to be included in the book, disclosed their knowledge about the virtues and uses. According to Grove, Ezhava insight into the affinities between a large number of plants is revealed by the names they gave to those species which have the same stem and to one which one or more prefixes are added: for example Onapu, Valli-onapu and Tsjeri-onapu. These names also provide a considerable amount of sociological know how. In Onam, the harvest festival, Onapu was used. More importantly according to Grove, the names preserve the true social affinities of the plant name, instead of isolating them in a context-less arbitrary category. The plants were arranged at the University of Leiden garden exactly as prescribed by Achuden and his fellow Ezhavas in the Hortus.

The Hortus was to seminally influence many historically and botanically important texts. Carl Linnaeus in particular, in 1740, fully adopted the Ezhava classification and affinities in establishing 240 entirely new species. The Swedish botanist conducted most of his studies at Leiden, where his mentor and friend Johannes Burman encouraged the study of the Hortus. Other important botanists such as Michel Adanson, Denis Diderot Jussieu and Ciamician Dennstedt also relied on Ezhava classification, as did, In India, Francis Rosburgh, Buchanan-Hamilton and William Jackson Hooker. Together with the Herbarium Ambroinense of G E Rumphius (1682-1702), the Hortus volumes immediately established Holland as the centre of tropical Botany.

The perfection of printing, the establishment of botanic gardens, global networks of information and materia medicinal transfer, together with increasing professionalisation of natural history facilitated the diffusion of Ezhava medico-botanical knowledge and imposed an indigenous technical logic on subsequent 'European' texts of botany. A remarkable chain links Indian lower caste knowledge, Dutch political interests, and the formative period of modern scientific botany and pharmacology. Linnaeus and Burman are extolled as fathers of modern botany. Itty Achuden has passed into oblivion.

There is now an English translation of this compendium of Ezhava knowledge. The Kerala University has bought it out. 300 years ago, the knowledge of the Ezhavas were appropriated by the gurus of modern botany. There is a more sinister monster lurking today: biopiracy. The West today guards its knowledge with hawkish alacrity, but continues to predate on third world knowledge systems with rakish impunity. The information on the medicinal uses of plants described in Hortus Malabaricus is of immense importance and current relevance, in the growing global needs for natural drugs, Intellectual Property Rights and Biological patent Laws. The migration, disappearance and the possible extinction of many of the useful plants from their original habitats, from where they were collected 300 years ago, as commented in this book, also points out to the need to take urgent steps to protect and conserve the plants of this biodiversity-rich zone in the Western Ghats of peninsular India, considered as one of the hot-spots of the world.