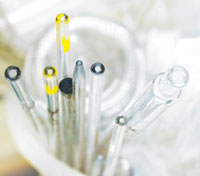 HEALTH IMPACTS: Chronic exposure to oxytetracycline or OTC can lead to bloodrelated disorders, liver injury and delayed blood coagulation. It can damage calciumrich organs such as teeth and bones and may cause nasal cavities to erode. Children under seven years of age may develop a discoloration of the teeth; infants of mothers treated with OTC during pregnancy are prone to a similar discoloration. Some other chronic effects of OTC include increased sensitivity to the sun, wheezing and asthmatic attacks. Tetracyclines are not advised for use in treating pregnant or lactating women and children under 12, except in certain conditions.

It is a broad-spectrum antibiotic. It has been banned from use in food-producing animals, in many countries.

HEALTH IMPACTS:  Studies on humans indicate that chloramphenicol could be a potential carcinogen and genotoxin. Repeated or prolonged exposure can lead to organ damage, bone marrow toxicity etc, while longterm exposure can cause aplastic anaemia, a condition where the bone marrow does not produce sufficient new cells to replenish blood cells. Aplastic anaemia is idiosyncratic (rare, unpredictable, and unrelated to dose), generally fatal and could be triggered by even small residues of chloramphenicol.

A Beta-lactam antibiotic, it is widely used in veterinary medicine for treatment and prevention of bacterial diseases. However, it is not recommended for use on honeybees.

Repeated exposure may cause allergic reactions, asthmatic attacks and other disorders.

ERYTHROMYCIN It is a Macrolide-class antibiotic used for poultry, and is now reportedly being used to protect honeybees from bacterial diseases.

HEALTH IMPACTS: With chronic exposure, erythromycin can turn into a terratogen—a reproductive hazard. Cardiac malformation has been observed in infants of women who had taken this antibiotic in their early pregnancy. Exposure to erythromycin (especially long courses at antimicrobial doses, and also through breastfeeding) has been linked to an increased probability of pyloric stenosis (a condition affecting the gastro-intestinal tract, leading to severe vomiting) in young infants.

Enrofloxacin is a synthetic antibiotic belonging to the fluoroquinolone class, and is used to treat bacterial infections; it is used as a growth promoter in cattle. Repor tedly, beekeepers are now using it as well. Ciprofloxacin is a metabolite of enrofloxacin and is used in the poultry farming industry.

HEALTH IMPACTS: Tests done on rats and rabbits suggest these antibiotics may be terratogens and lethal for embryos. The US Food and Drug Administration’s Center for Veterinary Medicine has proposed to withdraw approval for the use of fluoroquinolone anitibiotics in poultry, based not on the drugs’ direct toxicity but on its potential for increasing human pathogen resistance.

The samples were analysed in triplicate (each sample was tested thrice and the results given as average of three tests) using High Performance Liquid Chromatography (HPLC) with Diode Array Detector (DAD) and Fluorescence Detector (FLD). Internationally accepted published methods were used for analysis and validated by PML. The results were confirmed by spiking.

The 12 honey samples were bought randomly by PML from various markets in Delhi in July 2009. Of these, 10 were Indian brands and two were imported brands. None of the packages mentioned the source of the honey; it is, therefore, difficult to say whether the honey was produced and packaged in India, or was imported and then packaged in India, or is a mix of imported and domestic honey

THE TWO IMPORTED BRANDS WERE: