More women than men are voting in India. Majority of them are from rural areas

Former chief minister of Tamil Nadu M Karunanidhi, recovering from a historic drubbing in the recent assembly polls, might find solace in the superlative his home constituency earned during the election. Kilvelur assembly constituency in Nagapattinam district has recorded the highest turnout of women voters in the state—95.57 per cent. This is also the highest among the four states and a union territory that went to polls this year.

Kilvelur represents a change in electoral trend in India: women are casting ballots in greater numbers, sometimes outnubmbering men. During the recent polls, for instance, Tamil Nadu, Kerala, West Bengal and Puducherry reported more women voters than men, as per the Election Commission of India. Assam was the exception.

In Tamil Nadu 78 per cent women came out to vote; 10 per cent higher than in the 2006 polls. In half the state’s 32 districts, men fell behind women at voting booths. In neighbouring Kerala, female voters outnumbered male at 107 of the 140 assembly constituencies; the differences were in thousands in half the constituencies. Though women’s turnout has been high in Kerala, it was historic this time. Their turnout increased by 6.51 per cent compared to the 2009 general election; the overall turnout increased by 6.15 per cent.

This seems to be a continuation of the trend seen in Bihar assembly polls in 2010: for the first time in the electoral history more women voted than men.

So what triggered the swing? Experts suggest three reasons: peaceful polls, awareness among women and Panchayati Raj system that stimulated their electoral interests through reservations. 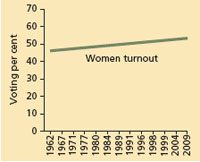 In Bihar and West Bengal, for example, violence-free election is the reason more women are coming out to vote. Deepak Mishra, professor of social sciences at Jawaharlal Nehru University, Delhi, says reservation and participation of women in panchayat politics might have contributed to high women voters turnout. Praveen Kumar, chief electoral officer of Tamil Nadu, says the election commission had launched special programmes to create awareness among women about their right to vote.

The trend does not mean the “arrival of women”, cautions Rajeshwari Deshpande, professor of politics at Pune University. It could be because of factors like emergence of women as a new political constituency, error-free electoral rolls and women leaders, she adds.

Other experts also attribute women-centric development programmes to the high turnout. “Reportedly 10 per cent more women voted for Bihar chief minister Nitish Kumar’s party in last elections because of his programme to give bicycles to school going girls and other cash incentives,” says Bidyut Mohanty, social scientist in Delhi. The Mahatma Gandhi National Rural Employment Guarantee Programme (MGNREGA) that offered more employment to women is also responsible for women voting in gratitude, she adds. It may be a coincidence but Tamil Nadu and Kerala that have more women as workers under MGNREGA have high women voters.

“Feminisation of workforce along with high literacy level, exposure to mass media and deepening of democracy through the participation of marginalised sections have helped achieve this turnaround,” says Mishra.