Facing resistance to the introduction of s in the North, business houses are waiting to take advantage of the South, including India, where laws are weak 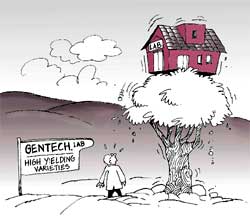 The daggers are drawn -- and its a fight to the finish between the biotech industry and the environment groups in Europe. While the former wants to push its products into the market without any discrimination, the latter wants better regulation, the right of the public to know and to choose and more transparency. Finding the going tough, cash-rich multinational companies have been eyeing the Third World countries as a major market, since this is where the larger markets and therefore, larger profits are. Here research is meagre, knowledge is poor and there is hardly any public debate.

With a blissfully ignorant public, weak governments with weaker laws, incessant demand for food, and an internationally binding biosafety protocol -- a legal mechanism to ensure safe transfer, handling and usage of gmo s -- yet to be framed, Western biotech companies are dumping their products into these countries.

Some of the major issues that are being decided in the North are whether these products are required or not, the safety of letting loose transgenic plants into the environment and the labelling of genetically modified products so that consumers at least know what they are getting.


Though India has set procedures to be followed even before research in genetic engineering can be approved, the genetic engineering advisory committee itself flouts the laws that it has set up. Furthermore, there has been no debate on the issue between the public, the scientists and the bureaucrats. No attempts have been made to educate the public and even gauge their opinion.

"As of now, genetically engineered plants seem to be the only viable option to increase production," says P K Ghosh, advisor at the department of biotechnology (dbt) and member of the reviewing committee on genetic manipulation (rcgm) and genetic engineering advisory committee (geac).

Approval for commercial release of gmos rests with the ministry of environment and forests(mef). However, till date, there is no system by which import of transgenics by the ministry of food can be controlled. The directorate general of foreign trade (dgft) may allow the import of soybean, quite blissfully unaware of the fact that the import could contain transgenics. dgft has never consulted the mef and. therefore , it has no idea whether transgenic produce has entered India. Currently India does not have technology to detect transgenic seeds. With declining crop yields and increasing population, there is a need to increase national awareness of the issue of transgenic food production.
Most contemporary Indian transgenic research is directed towards plants containing Bt toxic genes. The three private companies involved, namely, Proagro pgs India Limited, New Delhi, Maharashtra Hybrid Seeds Company (mahyco) , Mumbai, and Rallis India Limited, Bangalore, are working on transgenic experiments using information acquired from their respective foreign collaborators. (see table: Hot plants)

The second field trial is being conducted by mahyco in collaboration with Monsanto on imported transgenic seeds of cotton containing Bt genes. The tests are being held at Jalna, Maharashtra. The experiment will evaluate the resistance of this transgenic cotton to bollworm, which is responsible for an annual loss of Rs 160 crore in India. Monsanto and mahyco plan to launch their bollworm-protected cotton in India by the year 2000.