There is more water than land in north Bihar. The rivers that ramble down from the Himalaya feed numerous depressions scattered all over the plains making wetlands innumerable, one of the most productive ecosystems on Earth. Rich in flora and fauna, it is here that makhana (foxnut) fruit is cultivated, and the lesser-known singhara (water chestnut), too. Fishing is one of the most important sources of income. Unfortunately, in the last few decades many of the waterbodies have either dried up or have been reclaimed for agriculture. The rest have been reduced to cesspools of foul-smelling filth. The fragile interface between land and water is threatened, and along with that, the lives of the thousands of people who depend on them. Policy-makers do not realise that this part of the state has a water economy, not a land economy. The poverty of the state reflects the mental poverty that goes into planning for north Bihar 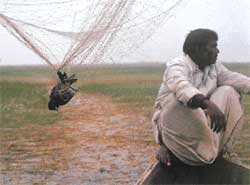 The Sahanis are known as "masters of water". This fishing community had been living in the wetlands of north Bihar for aeons, relying on them for sustenance. They did so by fishing or helping people cross the surging rivers that crisscross the floodplain. Or by displaying their art of trapping birds. They often got invites from faraway places such as Chilika in Orissa and Keoladeo National Park in Rajasthan to ensnare birds for scientific purposes. But now their skill no longer protects them from hard times. The lakes have been drained. As a result, the fish stocks have reduced drastically, and the birds have stopped visiting them. Most of the community members have already ventured out to do what their forefathers never did: work as labourers in faraway places like Delhi and Punjab.

The chaurs (tectonic depressions), mauns (oxbow lakes) and freshwater bodies that dot north Bihar were previously inundated by overflow from the rivers and local monsoon runoff. Their principal function was to act as sponges and they were nature's own initiative at flood control. Human intervention has seriously impaired this function. Setting up of embankments, roads and railways, have contributed considerably to waterlogging. Reclamation of depressions has compounded the problem.

According to A K Narayanan, former director (conservation and survey) in the ministry of environment and forest (MEF), India has about 4.1 million hectares (mha) of wetlands -- 1.5 mha natural and 2.6 mha human-made. The largest wetland regime of India is the Indo-Gangetic flood plain, of which Bihar accounts for 273,395 ha.

The wetlands of north Bihar are dependent upon six major tributaries of the Ganga flowing out from the central Himalaya on to the plains between the Nepalese border, and the Ganga itself. From the Gandak river in the west to the Mahananda river in the east, the northern part of the Gangetic plains is studded with numerous small freshwater lakes and chaurs, the vast majority of which are oxbow lakes marking the historical courses of the Bayanadi, Burhi Gandak, Sapt Kosi and Mahananda rivers. Most of the lakes are 100-200 ha, but some exceed 1,000 ha in area. There are more than 14,000 ha under chaurs in Darbhanga district alone. The other major lake Kawar in Begusari district, covering an area of 7,400 ha. It is considered one of South Asia's largest freshwater lakes.

Moreover, Bihar also has vast areas under diara and tal lands. Diara is land situated between natural levees or embankments. Floods are an annual feature in diaras. They are periodically eroded or formed due to a river's changing course. Diaras have not been surveyed well, but it is estimated that it accounts for 0.863 mha. Tal lands, bowl-shaped depressions, are found in natural levees of rivers and inundated by backwaters. This land is subject to prolonged flooding. An estimated 80,000-100,000 ha is under tals.

Today, many of these waterbodies have either dried up or have been reclaimed for agriculture. The rest have become breeding grounds for mosquitoes and a plethora of weeds.

There is water everywhere. But very few know how to make a living from them. Dryland agriculture does not help them survive because for about half the year their fields are submerged. Many of them live off fishing. This activity is restricted to September-January only. And that, too, thanks to a government policy, fishing cannot be done in areas which have more than one metre water. When the water crosses the one metre mark, it becomes government-owned, is auctioned to a contractor who sub-lets it to the fisherfolk again.

Besides fishing, cultivation of makhana (Euryle ferox) is another vocation. Perhaps Bihar is the only place in the world, where the fruit is cultivated on a commercial scale (see box: Damp growth).

Wetlands are also home to a large range of birds, mammals, amphibians, fish, insects, crustaceans and reptiles; and a variety of medicinal plant species used by the rural masses to treat many kinds of disorders. Some of the best known species that have therapeutic values include pistia (Pistia stratiotes), tholkuri (Hydrocotyle asiatica) and kesuti (Eclipta alba). Pistia, for instance, has been used for centuries to cure skin diseases, dysentery and asthma.

Sadly, policy-makers and planners fail to understand this ecosystem: the fact that it provides a means of sustenance to thousands of people in one of India's most populated states. Flood control measures do not take the fragile ecosystem into consideration. There is no one informing the land-hungry people that dryland agriculture is unsuitable for a wetland regime. Only those who survive on wetlands know that a hectare under pisciculture provides more in terms of money than a hectare undeer rice. But agricultural scientists and planners do not seem to understand the logic. They fail to realise that if an effort is made to understand the wetland ecology, it could bring prosperity to the region. That wetlands play a vital role in the state's ecology and economy. That north Bihar has a water economy, not a land economy.

"The people of Bihar can ill-afford to lose their wetlands. The long-term dangers of upsetting Bihar's water system are also not difficult to visualise," says Luvkumar Khacher, a member of the committee set up in the 1970s to advise the state government on making Kawar lake a protected wetland. "The importance of wetlands in maintaining the watertable over an extensive area of north Bihar can also not be negated. Any ill-advised draining will induce a remorseless drop in the watertable," he warns. Obviously, there is no one to listen to his presage.


Besides rampant reclamation, a host of other problems plague the wetlands. Generally inaccessible to law-enforcing authorities, they are becoming the hotbed for anti-social activities. Gang fights that were never heard of earlier are now a norm in almost all the wetlands. In 1999, Lallu Yadav, a known dacoit, was killed near Samastipur during an altercation over the rights over a weed, munj (Saccharum munja), used for thatching roofs and commonly found in the nearby wetlands. Available for free in earlier times, of late the local mafia has started to charge a price for the weed. The diara and tal areas are worst affected. Says Arvind Mishra, secretary, Mandar Nature Club, Bhagalpur. "There is a lot of problem in working in these areas due to the mafia presence. We have been surrounded and fired at by them."

Sunil Kumar Choudhary, professor, T N B College, Bhagalpur says, "Fisheries have also been taken over by the mafia. Now, fisherfolk have to take permission from the mafia and pay them for fishing."


Most of the lakes are contaminated due to agricultural runoff and domestic sewage. Some of the small ponds are in such a bad shape that they are not suitable for human use, even for washing and cleaning purposes. The general causes were found as inflow of chemical fertilisers and pesticides from nearby agricultural fields. Besides, solid wastes and domestic wastewater also find their way into the nearby lakes. Navin Kumar Singh, a researcher from the Bihar State Pollution Control Board, Patna, says, "These waterbodies, which are the drinking water source in rural areas, are getting poisoned. We haven't done any scientific study but there is no doubt about this."

Eutrophication, commonly referred to as the ageing process, is another result of pollution. A process in which the lakes become rich in nutrients and support a dense plant population that kills animal life by depriving them of oxygen, eutrophication is gradually turning the lakes into marshes before completely drying them. Shishir Kumar Verma, professor of zoology at the Biotoxin Research Laboratory, L N M University, Darbhanga, studied some of the lakes of the district and found three of them full of the toxic cyanobacteria (Nostoc oscillatoria) bloom. He also noticed eutrophication spreading fast to other ponds and lakes. "This is a major threat to aquaculture," he says.

The massive inflow of silt is also decreasing the depth of the lakes. Says D N Singh, assistant conservator of forests, Begusarai, "There is no scientific study on this aspect, but we have observed that every year about 3.8 cm of silt is deposited in the Kawar lake The silt inflow increases soil fertility and makes the people want more land than ever."

The best way to protect wetlands is not by legislation but by making people aware of what they stand to lose if this ecosystem perishes. "An awareness generation programme should, therefore, be given top priority," says Mishra. Udhuwa Bird Sanctuary Conservation programme taken up by Mishra's Mandar Nature Club is working towards this direction. The general awareness campaign has changed the fate of the sanctuary. Now the people identify themselves with the sanctuary and are keen to participate in various conservation activities. But elsewhere in north Bihar, the picture is not the same (see box: Drying wetlands).

It is time policy-makers and scientists woke up to the irreparable destruction taking place in north Bihar. All this requires a comprehensive survey of the wetland areas, identification of biodiversity and potentiality of different species; promoting scientific cultivation of the already cultivated plants, fishes and molluscs; introducing cultivation of potential non-cultivated species for food, fodder and medicinal use; strengthening cooperatives, establishing more hatcheries and rehabilitation of old ones for assisting fisherfolk and marketing support; and promoting other avenues of employment like need based local agro industries.