The war of the footprints

As satellites proliferate over the Indian sky and competitors wrangle a bigger share of the market, Doordarshan gears up to....

The war of the footprints 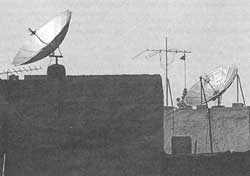 A celestial battle is brewing over the Indian sky. The lollipop of 150 million viewers in the country -- expected to double over the next 2 decades -- has international broadcasting firms scrambling to place satellites over the subcontinent. Everybody, from Doordarshan to Star, has plans to dominate the battle of the beams.

The footprints of 8 satellite systems already cover India or parts of it, and the number is expected to double. Among the new entrants will be Asiasat II, which will allow Star the option of an additional 8 transponders. By 1996, we can expect Apstar II, a Chinese satellite that will centre its beam on northeast India, Arabsat II, the Malaysian Miasat I, the American Panamsat IV, the Indonesian Palapa B4B and the Japanese JC Sat 3 hovering over the Indian sky.


Doordarshan is also gearing up for the competition. The launch of Insat 2C and 2D (scheduled for 1995-96) is expected to enhance DD's satellite edge. This might go a long way for DD to counter the imminent invasion from Time-Warner, NBC, ESPN, Viacom, the French Canal Plus, Discovery and others waiting in the wings.

DD is also trying to extend its footprint beyond the Indian subcontinent by leasing transponders from some international players. The information and broadcasting ministry (I&B) is negotiating to lease transponders on Panamsat IV, Apstar II and Asiasat II. Information and broadcasting ministry mandarins have discussed modalities with Hughes HS Bus, the firm which owns Panamsat I, for securing transponders on it. It will provide Doordarshan with a global sweep, covering swathes of Europe, the Commonwealth of Independent States, the West Asian countries and China.

Hughes is offering a package of Ku-band transponders for $1.8 million, but DD is likely to opt for C-band transponders at the cost of $2.2 million. As a senior Doordarshan official comments, "Ku-band would again mean targeting the Indian landmass. We would like to transcend that and explore new areas." Comments a ministry bureaucrat, "Till now, transcontinental networks were coming to India. Now we want to compete globally."

However, the key factors that will define DD's success in the satellite market are signal strength and footprint spread. DD's signal strength is only 36 decibel watts (dBW) compared with STAR's 42. This requires greater structural adjustments at the receiver level, especially in the use of larger dishes. Also, the Insat system basically caters to the Indian subcontinent, while STAR encompasses a much larger portion of Asia through its northern and southern beams.

The Insat system presently employs 3 satellites with 11 C-band transponders. While the present footprint of the Insat system primarily cover the Indian sub-continent, the projected launch of Insat 2C and 2D in 1995-96 may spread that area out. Says to K Narayanan, programme director of Insat, "Insat 2C and 2D spacecraft are being modified to carry 2 high-powered C-band transponders each with an area coverage extending from Southeast Asia to West Asia and will include Central Asia."


Interestingly, Insat 2C and 2D will not carry meteorological instruments and the search and rescue transponder, which will be replaced by 3 Ku-band transponders with a peak of about 43 dBW. Meant primarily for business communications, the Ku-bands will also be used for satellite new-gathering, expected to give DD the edge in national news coverage. The advantage of Ku-bands over C-bands is that they have higher signal strength. The frequency of the Ku-band at 15,000 Mhz is also much higher than the (3,500 to 4,000 Mhz) for C-band. But as a senior official of the department of science and technology (DST) points out, "It will not resolve problems, although accuracy will be greater."

Suraj Ahuja, deputy director (operations) of Satellite Planning Cell (SPC) says DD is updating its infrastructure for satellite news-gathering. The entry of the Ku-band, says the DST official, "...is a question of engineering optimisation. Another factor is the virtual saturation of the C-band, where the frequencies are getting congested."

For the present, DD, ambitious plans notwithstanding, is stuck in government policy and a severe shortage of funds. Unlike STAR, which has access to a dedicated television distribution satellite, DD has to share the multipurpose Insat system with other agencies, transmitting fuzzy images as a result. Says A K Kuthiala, deputy director (planning) in DDS Satellite Planning Cell (SPC), "These satellites are basically multipurpose. As a result, high-powered beams, which is what we want, are not readily available."

One of the indicators of the uneven contest is the signal strength of the Insat system, which at 36 dBW is considerably weaker than Asiasat's 42. Cable operators find the reception quality of the DD's 5 satellite channels to be extremely poor, although Kuthiala maintains that this was because "of people's ignorance and their use of incorrect equipment".

The difference in signal strengths has also posed hardware problems. While Star TV signals require a dish between 2.4 to 3.6 m in diameter, DD satellite channels need a 4.9 m parabolic dish, meaning additional investment for the operators. But the Insat system has an inherent advantage: while Asiasat's footprints weakens over the South, Insat's beam centre on Nagpur ensures nearly uniform service throughout the country. But with Star TV planning to access Asiasat II by '96, it is expected to have a much bigger footprint.


Economics is another significant factor. While Star TV is basically a commercial venture, DD depends on advertising revenue and governmental allocations. By the time Insat 2C and 2D are operational, the costs will exceed Rs 3,500 crores, discounting investments in dish antennae and associated equipment. The focus, therefore, will be more on satellite usage for telecommunications. "In the final analysis, given the number of transponders, telecommunications will remain the priority sector, especially as it is also economically viable", says a senior DST official.

Within the next 2 years several satellites like Asiasat II, Palapa B2B, Thaicom, Intelsat, the Russian Rimsat I, Arabsat I and Stationsar will be overhead and various networks will be competing for audience. While Star TV is engaged in assiduously targeting the Indian market, DD, too, visualises the future optimistically. Ahuja says, " The future is very bright. In 15 to 20 years, the terrestrial mode of transmission will become obsolete."