Is neglected due to slipshod policies, says BHASKAR RAY 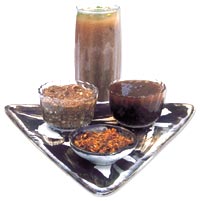 Kait or kath-bel belongs to the bel variety of fruit-bearing trees. It is called wood apple, curd fruit, elephant apple or monkey fruit in English and as Feronia elephantum or Feronia limonia in the scientific dictum. A native of South-East Asia, it now mainly grows in the dry plains of India and Sri Lanka and the arid plateaus of Malaya. In India, it is called kavit, kovit or kauth in Mumbai, kavitthana in the Konkan region, dadhiphala, dadhipham or kapittham in Kerala, bilin or kait in Punjab and kath-bel in West Bengal. It is considered sacred in some parts of the country: Sita gained her womanly wisdom with the help of this tree. The slow-growing tree bears fruits only after 15 years. Its flowers are dull red or greenish in colour, which bloom in early March, while the thick-shelled fruit matures October onwards. The fruit is either large and sweetish, or small and acidulous.

The different parts of the tree have immense medicinal value. The ripe fruit is used in gum and throat infections. It is good for tumours and opthalmia. Being a good source of citric acid, it can be used as a liver or cardiac tonic and aphrodisiac. It is also used for halting diarrhoea, dysentery or for curing diseases related to worms. The pulp and the dried rind can be applied externally to cure bites of poisonous insects.

The leaves are aromatic and possess carminative properties. The spines crushed with those of other trees can act as a remedy for menorrhagia. The bark is prescribed for biliousness. The gum can also be used as a soothing agent for skin and mucous membranes.

Kait, known as the "poor man's food" in rural India, is neglected today because of ignorant policies regarding its cultivation. It is time to rediscover its full value.