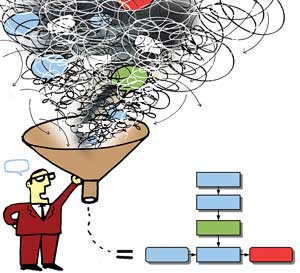 The country is entering the age of knowledge where increasing returns would be ubiquitous, states the introduction to the report Indias Science & Technology 2008. On the face of it, this statement seems like a hyperbole, given that majority of our workforce remains outside the ambit of what is traditionally described as knowledge economy.

However, and this is crucial, the report emphasizes that by knowledge it doesnt just mean the output of the traditional knowledge sectors of education and science and technology but includes those sectors where workers are engaged in knowledge activities, ranging from agriculture to industries, both modern and traditional. It is this underlying theme, which informs the report and collates 11 years of research on science and technology in the country.

Brought out by the National Institute of Science, Technology and Development Studies, the report is the first of its kind.It does not limit its scope to the formal and traditionally defined areas of science and technology; it tries to link the economy and society. For example, a section on rural India and inclusive growth includes rural sanitation, rural artisans and information and communication technologies in agriculture marketing.

While the data would serve as reference for studies in future, the report lacks a detailed analysis of the data. That makes the report incomplete. Consider this fact: India publishes 2.1 per cent of the total science and technology papers published the world over. Our ranking is below Spain and Italy, which are not known for a strong science and technology sector. And, Indias science and technology infrastructure is impressive. The country has over 4,000 research and development organizations, more than 300 universities and thousands of professional colleges. But there is no discussion on why India fares so poorly in the global scheme of things.

A discussion on the historical, economic, social and institutional reasons was imperative, but not present. Universities all over the world are, after all, the major locations of knowledge. Given that the universities have many more faculty members in a variety of disciplines than a typical research institution, this statistic indicates the truly abysmal research output of our universities.

While it may not be reasonable to expect a full-fledged discussion on all aspects, some articulation of the issues emerging from the data would have made this report truly useful. As it stands now, it is a wonderful compendium of an enormous amount of data, presented very well.

Hopefully, studies that emanate from this data would be more analytical and throw light on what the data indicates.

Shobhit Mahajan is professor at the department of physics and astrophysics, University of Delhi. He can be reached at shobhit.mahajan@gmail.com