Why weavers in Belgaum, Karnataka, can not go to market 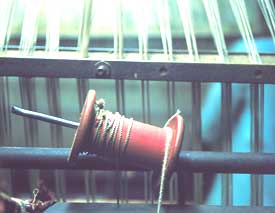 A disaster is brewing in Belgaum and we are on the brink of committing suicide. We have lost our traditional jobs and do not know how to feed our children. In spite of running from pillar to post, no government support has come to us. Please write about our plight and take our voice to New Delhi. That might move the Indian government, which otherwise is stone-headed," cries out Parashuram Dhage, secretary of Belgaum District Power Loom Association (bdpla). Dhage belongs to the 70,000-strong Nekararu weaver community of Belgaum in Karnataka state, that since time immemorial have woven the famous Belgaum sarees. Today bdpla is deep in debt -- Rs 15 crore. Most of the Nekararu are unemployed, and turning alcoholic. Their women work as housemaids and young girls are sold off.

Belgaum has about 25,000 power looms, the Nekararus' lifeline. But today, more than 50 per cent of these looms have shut down: high input costs, complain weavers, has made saree -making uneconomical. Despite repeated requests to both the state and central governments, no monetary or technical support has come forth. And the onset of 2005 has aggravated the fears of this dying community (see box: In 2005...).

"In 2005, when World Trade Organisation (wto) rules change, textile quotas would be removed and we will have to compete with international products. But we are ill-equipped and have no infrastructure to compete in the world market. Post-2005 we will be wiped off," says Gowri of Mahila Jagruthi, a Belgaum-based organisation working with Nekararu women.

But such was not always the case with the Nekararu. They claim to be behind the movement which ensured that Belgaum became part of Karnataka state and not Maharashtra. State leaders acknowledge their important role. "If they had not supported Karnataka, Belgaum would have gone to Maharashtra," says Vatala Nagaraj, a Kannada leader of the state.

Weavers complain that the Karnataka government is not concerned about their plight. Instead, they are heavily taxed and forced to pay high per unit cost of electricity. "Other states support weavers by supplying electricity to power looms at a subsidised rate. For instance, Maharashtra charges Rs 1.60 per unit; Tamil Nadu charges Rs 1.10 per unit; and Andhra Pradesh charges only Rs 0.87 per unit. Contrast this with Karnataka, that charges Rs 4.40 paisa per unit. Why is it that governments are ready to give free power to farmers and not weavers?" questions Dhage. Maharashtra has also waived off 50 per cent of the loan amount due on weavers, and is offering easy monthly instalments. And since the input electricity cost is less in other states, the sarees produced by weavers in these states also cost less.

These weavers have have to cough up a high input cost in terms of electricity consumption. In addition, there is no government support in terms of providing them with latest technology, or sharpening their skills and marketing their products. "Belgaum weavers cannot compete with weavers from other states. As of now there is no special assistance for them. Recently the weavers association met the deputy chief minister, who has promised to give them some subsidy. But this needs cabinet approval," acknowledges T Siddanna, deputy director, department of handloom and textiles, Belgaum. Belgaum's weavers have been trying to procure the latest power loom technologies, and some have even computerised systems for saree designs. But all this on their own. Naturally, their costs have enormously increased. While returns are not good enough, computerisation has also meant laying off workers. In all, a real mess.

Thus, high costs and huge debts incurred have combined to directly impact the power looms. For instance, initially one loom owner would have 10-12 power looms working throughout the year. But now it is common to see power looms either locked up, or only two or three looms functioning. The number of weavers employed has drastically reduced. And so is the amount paid to weavers per saree. "Earlier we used to get up to Rs 80 for one saree, but now we are paid Rs 30 per saree. A saree initially fetching us Rs 40 and Rs 20, now fetches us a mere Rs 15 and Rs 6 respectively. And since jobs are lesser, there is an internal fight within the weavers and we end up working for lesser salary too," says a Nekararu. The Nekararu are thinking in terms of forming their own co-operative and selling sarees, but again there is no support or guidance from government. Also, they prefer selling through middlemen as money exchanges hands immediately. Selling directly means waiting for three to six months for cash payment!

Prabhavati R Babukar owns a saree finishing unit in Belgaum and is concerned: "Earlier we used to get 3,000 sarees per day for finishing work, but for the last two years we are not even doing 300 sarees in a day. Worker strength has also reduced from 80 to 10. And I find that keeping even these 10 workers is a big headache."

As if these hassles were not enough, the Nekararu have been gifted more problems by the government. A few months ago, their ration cards got cancelled; at present, they are busy fighting to get these cards back. "We have been told that the Indian government is revising the list of families below poverty line (bpl). And our ration cards have been cancelled because we have televisions, fans and lpg cylinders, which are considered 'luxury' items. But government does not understand that 30 litres of kerosene in a month costs Rs 800 as against an lpg cylinder of Rs 300. Rather than protecting us, government is bent upon killing us," alleges Gowri.

T Sidanna, deputy director, department of handloom and textiles, Belgaum, has no qualms in admitting that when the market opens up, the Nerakaru will collapse