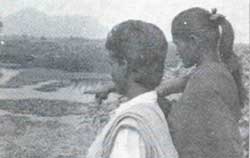 HAPPY days are here again for thousands of women in the Madurai, Ramanathapuram and Kanyakumari districts of Tamil Nadu. Cutthroat moneylenders had better stay away, and drunken, violent husbands restrain their hands. Women can now own land, procure potable water within the village itself. And demolish arrack shops.

"It's not so easy to keep women under their husbands thumbs anymore," grins Stella, a fish vendor from Eniam village near Kanyakumari. A movement to help women reap the benefits of easily accessible capital by forming credit societies has had interesting spinoffs. The groups spearhead collective action, be it for water, fodder or against the genie in the bottle.

For rural women, accessible credit is largely an impossible dream. Says Seeta of Gandhinagar, "To get a bank loan of Rs 4,000, you have to first grease palms with Rs 1,000." Besides, banks only cater to business needs. To meet wedding expenses or medical exigencies, women still have to turn to local usurers.

And the vicious cycle begins. A loan of Rs 100 has to be repaid within 5 weeks at Rs 15-20 a week. Since the first week's interest is usually subtracted from the initial payment, one actually borrows Rs 85 and repays Rs 100. Crippling interest rates deter repayment and the debt accumulates. Seeta borrowed Rs 15,000 from a moneylender for her daughter's wedding and her son's education 10 years ago. Today, after mortgaging all her jewellery and most of her utensils and even subleasing half her 0.405 ha of land, she still has to pay back Rs 40,000. "I have to borrow money to eat," she sobs.

But the scenario is changing. Ulagammal took a loan of Rs 3,000 from her collective in 1990 and bought 6 sheep. The herd grew to 14 in just 3 years. She has already reclaimed the land which she had subleased. "I will take another loan to pay off the moneylender," she says.

In 1990, Professional Assistance for Development Action (PRADAN), a Madurai-based NGO, started mobilising women in the nearby villages. The aim was to tap the financial resources of the women, however meagre, by organising them into small groups, or kalanjiyams (literally, granary). Similarly Santidan, a Nagercoil-based NGO has been organising Kanyakumari fisherfolk into sangams since 1983.

The 29-member, 4-year-old Amman kalanjiyam in Gandhinagar meets once a month, in a shed that serves as a village school-cum-community-hall, to decide on deposits. "Earlier, each of us used to put in only Rs 5 or Rs 10. Now, we save up to Rs 100 a month," says group secretary Karuppayi. The kalanjiyam pays an interest of 1 per cent a month... "more than your banks," Karuppayi points out.

Loans are granted to members at a 5 per cent monthly interest. Says Seeta, "Initially, we used to loan out all the money to the members uniformly. Now, we decide who needs the money more and should get the loan." A repayment time frame is agreed upon. It varies with the amount and the purpose of the loan. Karuppayi says members pay back on schedule. "Everyone knows it's in their interest to pay back, because it's their own money they are borrowing."

Part of the money earned is used to maintain the accounts. The remainder is deposited in a bank along with an initial grant from PRADAN. "But it's never idle in the bank. It's always with someone as a loan," says Karuppayi.

K Narender, PRADAN's team leader, says that once firmly established, the groups move on to a higher phase of "a people-managed financial system": 10 to 12 groups from contiguous areas are clubbed into a cluster association and a committee formed from amongst its members.

Muthulakshmi, once president of the Alagu kalanjiyam of Alagapuri village, is now the busy manager of the Lakshmi Bank set up by the Veliyakundram cluster. Complete with a manager and board of directors, the cluster also has an account in a nationalised bank. Member groups apply to the cluster bank for loans and in turn pass on the money to their individual members. "This Sunday, the president of a kalanjiyam requested a loan of Rs 7,000. A woman in her village had to pay her husband's hospital bills. Which other bank would give her the money?" she asks, busily scanning loan applications.

Of the 2 per cent monthly interest charged, half remains with the group and the rest goes to the bank. Other sources of income for the bank include Novib***, the International Fund for Agricultural Development (IFAD) and the National Bank for Agricultural and Rural Development (NABARD).But, says Narender, "As of now, only 10-25 per cent of the credit needs are met by the groups. They still have to go to moneylenders for larger amounts."

But these landless women have other plans. Says Bhagavathi, accountant in Lakshmi Bank, "Our aim is that everyone should have land of their own."

The women of Mathur village are already halfway towards realising this dream. The 14-member Mandaiamman kalanjiyam here has availed of a Rs 9,000 loan from its cluster bank; with another Rs 9,000 from its members, it has bought 60 cents (0.24 ha) of land as a permanent asset. The fodder being grown here will be sold preferentially to members at a subsidised rate of Rs 4 a bundle, and at Rs 5 to others. Plans are also afoot to dig a well in the plot. "We can develop a double-crop area here, and even sell the water to those who want it," says the group's secretary.

Many women have taken loans to start small businesses to augment their meagre incomes. For Susiemary, recently widowed and with 7 mouths to feed, her shop selling daily goods is her lifeline. "I've almost repaid the Rs 3,000 loan I'd taken. I'm planning to take another loan so that I can expand the shop," she says.


Such activities have been morale boosters. Tamilmani, Amman kalanjiyam's accountant, recounts how last December they met the collector about their water problem. Before the turnaround, it took them an hour to reach the nearest source of water. After the meeting, however, a pump was installed in the hamlet. "At least, getting water is not a chore anymore," Tamilmani says. Similarly, all the members of Alagu kalanjiyan got ration cards and prodded the indolent panchayat union into water taps in the village.

The heat of excitement over the women's newfound strength has scorched the husbands a bit. In Eniam, a little hamlet in Kanyakumari, sangam members recall: "Earlier there was an arrack shop just outside the village. The men used to return home from work, beat up the wives a bit, extract money, and go off to drink. In other words, everything was normal," Antonyamma, the kalanjiyam secretary, chuckles sarcastically.

Then the arrack shop insidiously relocated itself inside the village. Exasperated with husbands drinking day and night, the sangam held a meeting, after which the women descended upon the shop. "My husband was shocked! 'Why have you come here?'" Stella gleefully mimics her husband. "We smashed everything there. The shopkeeper ran off. Our husbands ran off. We ran after them," joined in Antonyamma. The shop finally shifted to a safer spot, far from the village.

The sangams, set up with help from Santidan, hold weekly meetings to discuss financial matters. Unlike in the kalanjiyams, each woman here deposits money in accordance with her capacity: Rs 5, Rs 50, or nothing at all. The amounts are noted against the depositor's name by the animator in the group, usually a resident of the village, trained and paid by Santidan. A woman has to have saved a certain amount to avail of a loan -- a saving of Rs 400 entitles her to a loan of Rs 1,000, and so on. All loans have to be repaid within 20 months. Vanaja, the women's coordinator at Santidan, says that the rule has been framed independently by the sangams.

The women have tackled the rare cases of non-repayment of loans in a characteristically simple manner. Sirihapushpa from Pudugramam describes how: "Last year, one woman didn't repay a loan despite repeated reminders. Finally, all of us from the sangam went to her house, just removed some of the tables there and sold them. There have been no more such problems."