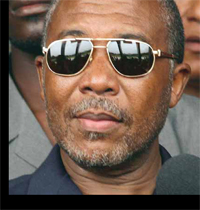 On 24 April 2006, Dutch timber dealer, Guus van Kouwenhoven went on trial at the International Court of Justice, Hague, The Netherlands, on charges of war crimes against the people of Liberia. Also in the dock is Charles Taylor, Liberia’s dictator between 1997 and 2003. Regarded an international pariah for much of his rule, Taylor battled UN embargoes to preside over a regime that made Liberia the one-stop arms supermarket for insurgent groups in much of West Africa. Neighbouring Sierra Leone was particularly brutalised: Taylor fomented civil war there by arming a insurgent group, the Revolutionary United Front (RUF). The traffic was, for the most, part driven by timber and van Kouwenhoven was among the most significant players. The Dutch appeared on the Liberian scene in the late 1980s. His business then was gambling and hotels. During the turbulent 1980s, van Kouwenhoven’s hotel on the outskirts of Liberia’s capital, Monrovia, was amongst the swankier places to be, frequented by President Samuel Doe, among others. But by the 1990s, its heyday had long passed.
Van Kouwenhoven moved to other pastures. When then rebel leader, Taylor began to dominate Liberia’s political scene, the Dutchman switched allegiance. “If you do business in Africa, you have no choice but to be on good terms with those in power,” he told a Dutch weekly later. Van Kouwenhoven also changed business, acquiring interests in several logging companies, including the largest timber firm in Liberia, the Oriental Timber Company (OTC), based in the port city, Buchanan. By 1999, he headed the company.

Van Kouwenhoven also became part of the notorious clique around Taylor that included Ukranian timber merchant and arms dealer, Leonid Minik, and Sanjivan Ruprah, a Kenyan businessman of Indian extract. They ran the arms and timber traffic with military- like efficiency. OTC was the biggest player in the operations. In 1999, the company signed a deal with Taylor, which allowed them to extract timber from “concession areas” in South Liberia’s forests. Van Kouwenhoven subsequently acquired concessions which gave OTC control over a third of Liberia’s forests (see map: A Dutch businessman in Taylor’s fiefdom). The deal also gave OTC complete control over Buchanan. It was later revealed that the company paid Taylor US $5 million up-front, quite likely in exchange for tax-exemption and exclusion from regulations.

Road control
The 1999 deal secured OTC a contract to build roads in Buchanan and Monrovia. The company executed the job with clinical efficiency. For a place collapsing into ruin, the roads were surprisingly well-maintained. They had to be. The roads were critical to Taylor’s — and his coterie’s — scheme of things. Smooth highways, almost empty of traffic, crisscrossed the country, linked up to a network of dirt roads that disappeared into forests. A 16,00-km dirt road from Buchanan to Greenville was upgraded to a four-lane highway allowing logging to continue year long.

The roads had another purpose. UN’s Sierra Leone Expert Panel Report noted in 2000: “Roads built and maintained for timber extraction are also used for weapons movement within Liberia, and for the onward shipment of weapons to Sierra Leone.” OTC managed the whole process from the use of its own trucks along the logging roads to the disembarkation of the contraband at Buchanan port, the report noted. 46 Down To Earth • June 15, 2006 C R I M E A despot’s log Wood, diamonds, arms and blood: Charles Taylor’s stock-in-trade REUTERS Similarly, a report of the UK-based international pressure group, Global Witness, noted: “The port of Buchanan, overseen by Kouwenhoven, has become a primary location for arms imports by sea.” A businessman familiar with Taylor’s business methods put the despot’s links with van Kouwenhoven aptly. In an interview to the British daily, The Guardian, he said, “Guus fronted Taylor up to US $5 million for his logging concessions.

They split the profits. Guus’s ships take out the logs and they bring in the guns.” Not surprisingly, Taylor referred to OTC and the timber it extracted as his ‘pepperbush’: a Liberian expression for a goldmine. Taylor formalised the sordid links through the Strategic Commodities Act, 2000. It stated, “The President of the Republic of Liberia is granted sole power to execute, negotiate and conclude all agreements with any foreign or domestic investor for the exploitation of the strategic commodities.” The commodities listed included diamonds and timber and van Kouwenhoven was made a member of Liberia’s Forest Development Board.

The board also included Talal El-Ndine, a Lebanese businessman, later named by UN as the man who paid RUF insurgents. “As long as people like Guus are involved in the logging operations, the money will go back to Taylor,” a diplomat familiar with the Liberian dictator and his Dutch friend told Guardian in 2001.

The French connection
In 2000, the UN officially accused Taylor of involvement in an illegal trade of diamonds, arms, and timber. In May 2001, the Security Council banned trade in Liberian diamonds. However France and China squashed demands for sanctions on Liberian timber. Why? The two countries were the biggest importer of the logs of war. According to Global Witness’s estimates, France imported Liberian wood worth US $7 million in 2000, while China’s imports amounted to US $13 million. A key figure in the French connection was a certain Sampei, a French businessman who settled in Liberia in the 1970s and had a logging company there. He moved to Ivory Coast in 1980 and forged a relationship with French diplomats there — some of them later held key positions in the African affairs cell of the French foreign ministry.

Sampei also befriended Taylor when the latter was still a warlord, and followed him into Liberia to restart his logging business. He died a few years before sanctions against Liberia were tabled in the Security Council, but by then his children had revived the logging business — and according to newspaper reports of the time, “retained contacts in the African affairs section in Paris”. More importantly, Liberia had become the new frontier for French loggers , who after denuding Ivory Coast’s forests, followed Sampei into Liberia. Aware of the unstable conditions in Liberia and van Kouwenhoven’s hold on ports in the country, the French used San Pedro, in southwest Ivory Coast as port of exit for Europe-bound Liberian timber. Taylor falls Sanctions apart, the UN also sent in forces against Taylor. By August 2003, the despot’s resistance crumbled. He fled to Nigeria. By then the civil war had claimed around 75,000. Many more were maimed. On March 29, 2006, Taylor was arrested in Calabar, Nigeria. Van Kouwenhoven had already been arrested in Rotterdam, the Netherlands, a year before. The trial is expected to conclude in mid-June. According to Natalie Ashworth of Global Witness: “This incredibly important case will highlight the devastation wrought by the timber industry upon West Africa. The failure of the industry to take a moral stand on this issue demonstrates the need for international mechanisms to curb the trade in conflict resources”. Ã”Ã»Ã¡