A Nepal school that imparts practical knowledge to farmers 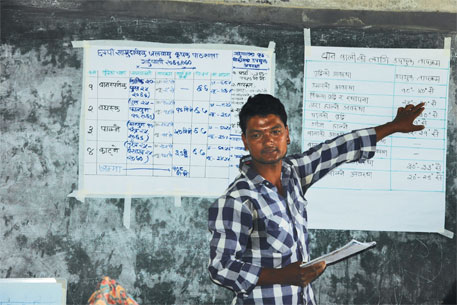 This is a school where both students and teachers are adults. Books and regular classes are not part of the curriculum and the pupils are practising farmers. Welcome to Climate Field School in Chhampi village of Nepal’s Lalitpur district which im parts practical lessons on climate change.

As one descends into Chhampi using a mountain road, a small fenced structure in the middle of farmland emerges. “This is the place from where the village fights erratic weather,” informs Uttam Bhandari, a teacher at the school where lessons are given just before the students take the most important decision of their lives: when to start or harvest their life-saving crop. Of the 1,000 residents, 80 per cent depend on agriculture.

The fenced land hosts three vital instruments: a thermometer, a rain gauge instrument and a meter to measure the moisture and pH levels of the soil. Bhandari records temperature and rainfall twice a day. Once in a while in the middle of a crop cycle, he takes the device to record moisture and pH to people’s farms. “These recordings are stored in a data card which is sent for analysis to the meteorological department in Kathmandu,” he informs. The analysis and the field recording help farmers decide the time for irrigating and protecting crops. Before and during a crop cycle, students attend the school to learn about weather and soil conditions. Bhandari has a cell phone that receives daily alerts of national forecast which he shares with his students.

Thanks to the efforts of the school, the village has mapped its own weather conditions. “Now we know when a calamity will strike. We are prepared well in advance to save our crops,” says Krishna Bahadur Ghimire, the only seed farmer in Chhampi where people lose up to 30 per cent of their crops because of hazards like hailstorms and erratic rains. That’s not all. “Moisture reading has prepared people to manage water well. The village’s only stream is no longer perennial,” says Ghimire.

The birth
The Climate Field School is a response to the village’s long drawn fight against erratic weather. After months-long discussions, the village development council, Nepal’s local government, zeroed in on two things that could save the crops: a mechanism that alerts people of impen ding hazards and assessment of soil and water. Since the local crops need specific inputs, the national forecast was of no use and the local forecasting system had vanished by then. “There was no way we could prepare ourselves to protect our crops,” says Bhandari. It was then that The Lutheran World Federation-Nepal, an international charity organisation, floated the idea of a climate field school that was already being explored in Indonesia with some success. In October 2011, the idea was discussed during a village meeting. Those with big landholdings were the first to become members of the school since they had suffered the most, says Subhadra Thapa, president of a local self-help group. After a series of meetings, 16 residents, of whom 12 were women, stepped forward to enroll as students. They agreed to give a patch of their land to host the weather laboratory and convinced a local school to spare a classroom when needed.

To start the process, the Lutheran World Federation agreed to pay for the instruments and one year salary of the local youth who would work as the facilitator. After one year, students would have to pay. A manual on changing climate and its impacts on local crops was created after a year of consultations with farmers, scientists and meteorologists in Kathm andu. “We sought the help of a local science teacher to train a youth selected by the village on basic knowledge of instruments and the science of climate,” says Gopal Dahal, manager with the feder ation. This youth was Bhandari.

It has been eight months since the school was inaugurated and residents are already raving about it. This year it started raining early due to the cyclone that hit Bangladesh in May, says Thapa. “Due to advance warning and better monitoring, we covered our standing crops with twigs and saved our crops,” says Thapa while measuring moisture in the soil with Bhandari. “Does early rain mean early paddy? Without the instruments in our village I wouldn’t have taken the risk of early transplantation,” she says. Arguably, this is what the school is meant for.