Government watershed programmes run for a limited period. The impractical timeframe threatens to undo the goodwork 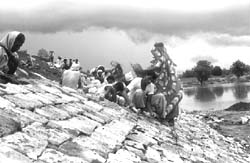 This is not the only hurdle in making water conservation a long sustained movement. To make it a sustainable social movement and to reap its dividend in the form of poverty eradication, the government needs to put in prolonged efforts. Most of India's poverty eradication programmes have failed because they have been short-term interventions. Creating the structures and handing them over to the community alone will lead to poverty eradication. Ecological regeneration brings prosperity when it is managed with mature community institutions. Even when the programme is highly participatory in nature, like the Madhya Pradesh (MP) government's Rajiv Gandhi Watershed Development Mission (RGWDM), India's largest watershed development programme, the greatest drawback of the programme is the 'impractical' timeframe under which it takes up watershed development activities. Now as the mission is set to withdraw from villages after the stipulated four years, the advantage of drought-proofing will be undone. Take the example of Kakradhara village in Jhabua district. This village was staging a magical ecological and social regeneration but the moment the mission stopped its work, the first casualty was the management of regenerating resources. Says Badli Bai, a village resident who pioneered women thrift and credit groups in the district, "The government's intervention was necessary for facilitation but its withdrawal from the village meant a stop to many development activities that could have helped in enhancing the village's earning." Village institutions have collapsed and during the current drought, 80 per cent of the village has migrated. "Migration means a collapse of the village system," Badli laments.

"The mission (RGWDM) is carried out as a project within the timeframe of four years and not as a well stretched out movement with an open mind," says Naidu, collector of Sagar, the district pioneering watershed development. According to official statistics, out of the mission's targeted 3.4 million hectare, only 42 per cent land (contrary to the targeted minimum of 60 per cent) has been treated by the seventh year of the mission. This is why the state government has technically not withdrawn from any village under the mission though the procedure for withdrawal started way back in 1999.

As evident from Kakradhara, the immediate casualty of this fixed timeframe are the village institutions, which are supposed to manage the watershed activities in the post-mission period. The collapse of the village institutions threatens the sustainability of the programme. "In a large number of watershed villages we have failed to deliver the benefits of watershed development activities to the poor," admits Prasanna Das, secretary for rural development in the state. For him, a less mature institution will always be prone to a hijack by a few influential villagers. However, he feels that the timeframe of four years is enough for setting a change in motion.

Past experiences show that it takes 10-15 years to regenerate the devastated ecology and to manage it in a sustainable way (see chart: The road to prosperity). Says Anna Hazare, a noted social worker and architect of Ralegan Siddhi: "By fixing a time limit the programme's scope is limited to a few technical achievements only. But for a sustainable use of the resources generated, one needs institutions to manage it." In an evaluation of watershed development projects in Gujarat, the Gujarat Institute of Development Research found that the four year time limit can only be a timeframe as 'short-term intervention'. This has affected the sustainability of the structures created.

"Without addressing this question of sustainability, the programme will only end up wasting public money," says Mohan Kanda, additional secretary of the department of land resources, Union ministry of rural development that supervises and funds all watershed development programmes. He admits the mistake made by the Union government. Realising this, the department has recently extended the time period of the programme by one year. To continue the government's facilitation after the timeframe, now the department has come out with a 'partnership programme'. Under this arrangement a local organisation will facilitate the community organisation. "It will make the government's presence as a facilitator felt," says Kanda. Propagating the concept of 'watershed plus', Anil C Shah of Development Support Centre of Ahmedabad, an NGO involved in watershed development programmes, says, "Watershed plus is the activity for institution building in a village and it should be continued by the same implementing agency along with the watershed committees and associations. Most committees are busy with construction ignoring the factors of social construction."