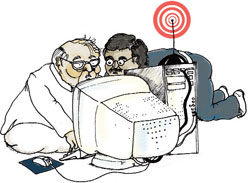 Want to know how funds under the rural job guarantee scheme were used in a remote district of Rajasthan or Gujarat, or looking for information on various subsidy schemes? With a recently approved policy on sharing of non-sensitive data online, such information would be a click away.

On February 15, the Union Cabinet cleared the National Data Sharing and Accessibility Policy (NDSAP). The policy will apply to all data created and collected using public funds provided by the government directly or by various ministries and departments. The department of science and technology (DST) has been working on framing the policy since 2009. Civil society groups have welcomed NDSAP but say it remains to be seen how it will be implemented. Madhu S of Kochi-based Center for Public Policy Research, which was consulted while framing NDSAP, says a proper framework is needed to create a database. “Not all departments have a server system, which enables transfer and collection of data. Collection, processing and dissemination of data need to be streamlined,” he adds.

Public sharing of the data will be helpful, especially for the civil society, in development planning, says R Siva Kumar, senior scientist involved in framing of NDSAP. “At present, activists have to chase the information commission to get data. If the policy is executed well, they would save a lot of time and money,” says Venkatesh Nayak of Access to Information Programme, Commonwealth Human Rights Initiative in Delhi.

How it will work

Under NDSAP, the data will be classified as sensitive or non-sensitive from the security standpoint. The sensitive data will fall under the “negative list” and will not be shared. The key feature of the policy is an Internet portal, called www.data.gov.in. It will act as a gateway to all government information, linking to data on other government sites. This concept of a central data repository is based on the US site, www.data.gov.us, and the UK site, www.data.gov.uk, which offer similar information. Madhu says the data will benefit society. “It will not be restricted to government transactions. Number of schools, funds available and utilised under schemes, type of soil in a particular area will also be made available,” says Madhu. For instance, the finance ministry will have to daily update GDP information. Currently, it is done periodically.

When it comes to extracting information not in the public domain, Right To Information (RTI) Act comes to mind. Then how is NDSAP different from RTI? “RTI is kind of a reactive mechanism. NDSAP will ask government to share information on a proactive basis. One does not have to ask for it,” says Kumar. Madhu adds the policy will supplement RTI. “With NDSAP, the government itself takes an active role in publishing data. It also helps avoid duplication and get better information on a subject matter,” he explains. Will the policy come in the way of RTI? No, says Madhu. “RTI and data sharing run parallel. If a person applies for information under RTI, officials cannot reject it saying the information is available through the policy.”

DST has given six months to all government departments to standardise data for the policy. The success of the endeavour lies in coordination and cooperation of various departments and their officers, points out Madhu.

Referring to a statement in the policy that states “all sharable data will be made available on a (sic) as-is where-is basis”, Nayak says the government is not taking responsibility for the accuracy of the data. States, too, have not been mentioned in the policy, he adds. “States produce most of the data for Centrally funded schemes. Some states have electricity problems, while some generate data on regional problems in regional languages. Why have these issues not been given acknowledgement in the policy?” asks Nayak. He highlights another problem. “Since it is left to the departments to decide what should be kept under wraps, it is doubtful how much information will actually be revealed.”