The role of tusks in sexual selection questioned

It is a bright afternoon in the Kaziranga National Park in Assam. A carefree, tusk-less male elephant (makhna) is rambling in the shallow waters of the Sohola Beel, a seasonal lake in the park formed by the flood water of the Brahmaputra River. A few kilometres away a herd of about 25 elephants—their bodies fully soaked in mud—slowly walks towards the beel. A tusker, about a foot taller than the makhna and with a pair of nicely elongated tusks, follows the herd. It interacts with a few females when other members of the herd scatter to forage in the grassland.

As the herd nears the beel, the makhna becomes attentive. It looks at the females entering the water. A few minutes later, it moves towards the herd but stops abruptly. Some females from the herd look at the makhna; one of them even covers a small distance towards him. The makhna doesn’t move. The tusker was standing in the middle of the herd and was staring at the makhna. After standing in the same position for some time, the makhna turns back and walks away.

There is a good possibility that the female who walked towards the makhna was in oestrous and the makhna was looking for a chance to mate with her. But at the same time, the swollen temporal gland between the eye and the ear of the tusker and the small streak of fluid secretion on his cheeks from this gland indicated that the tusker had just started his musth phase. Musth is a temporary but intense sexual state arising due to elevated testosterone levels and the tusker was perhaps guarding the female from rival males. The makhna could not gather the courage to challenge the tusker and gave up without a fight.

This may sound reassuring for the followers of Darwin’s theory of Sexual Selection: the elephant tusk has evolved in males as a weapon to win over females or as an ornament to attract them. The tusker winning over the makhna in the male-male competition thus only seems a foregone conclusion. Unfortunately, it is not.

The tusker at the Sohola Beel did not win because of the tusk. The makhna was very likely intimidated by the fact that the tusker was in the initial phase of musth and that it had a larger body size. According to a study by Karpagam Chelliah (Ph D student) and Raman Sukumar from Centre for Ecological Sciences, Indian Institute of Science, Bengaluru, the musth state and the size of bodies dictate mating advantage in elephants. Tusk plays a relatively minor role. When in state of musth, males go looking for oestrous females to mate with. They signal their musth status by secreting a smelly fluid from a temporal gland and through a pungent urine dribble. A musth male elephant defeating a larger non-musth male has been observed in African elephants by scientists Joyce Poole and Cynthia Moss way back in the 1980s. However, the importance of tusk in the male-male competition was not explored.

Chelliah and Sukumar conducted systematic, behavioural observations of male-male competition in the wild elephant population of Kaziranga,that is possibly unique because of the almost equal number of tuskers and makhnas. They found that a musth male would win over a non-musth male in most cases, irrespective of the tusk status. And if both the males are in same musth status, the male with the larger body size would dominate, again irrespective of the tusk status. “Since most duels were asymmetrical, one male was in musth the other not or one male being much larger in body size than the other, tusk came as an advantage only when two musth males of similar body size fought. Such symmetrical combats, however, were very rare; only 12 per cent,” says Chelliah.

The tusker that won the contest at the Sohola Beel was larger than the makhna and in musth. So one cannot conclude that he won only because of tusks. “Had the makhna been in musth as well and of a larger body size, the tusker may not have won,” says Chelliah. Such results were initially puzzling for her. “I saw a tusker running away from a musth makhana of smaller size,” and wondered, “how can a makhana who is just secreting a smelly fluid injure a tusker?” she laughs. But then we observed makhnas draping their trunks over an opponent’s tusk and pressing down with their body weight. “Besides, the tensile strength of Asian elephants’ tusk is lower than that of many bamboo species. Elephants can effortlessly snap bamboo culms with their trunk and body weight, and it is possible that they can do the same to an opponent’s tusks, especially if they are long,” says Chelliah. “The tusk does not seem to have the additional advantage of being an ornament to attract females either,” she adds. The study was published in the journal Animal Behaviour in September 2013.

Scientists attribute high numbers of makhnas in the Northeast to deliberate removal of the tusk gene from the wild populations. “Tuskers have been selectively removed from the wild in the Northeast for about 1,000 years. There are historical records to show that tuskers from Assam and neighbouring states were supplied to be deployed in armies,” says Sukumar. “Poaching of tuskers for ivory has also been prevalent in these states for several hundred years. The removal of the tusk gene has been over sufficient number of generations to bring a genetic change in the elephant population towards tusklessness,” he adds.

“There has been rampant poaching of tuskers for ivory in south India, but only between 1970 and 2000. That would have affected only one generation and would not have caused genetic changes in the population,” adds Chelliah.

In the Northeast the ratio of makhnas over tusker is only increasing. A 1995 study by scientists of Christian Albrechts University, Kiel, Germany noted that in the 19th century, makhnas were rare in north-east India. However, by 1950 makhnas were 48.7 per cent of the male elephant population and about 60 per cent by 1970s. According to the population estimates of the Assam forest department compiled by Bhupendra Nath Talukdar in his book Elephants in Assam, the percentage of adult and sub-adult makhnas in Assam increased from 62 per cent to 76 per cent between 1993 and 2008. 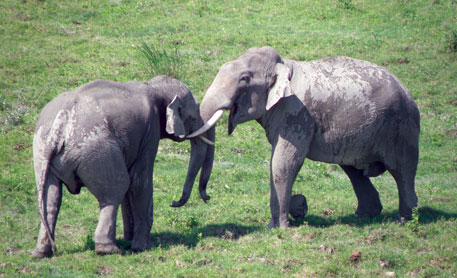 Does this mean Asian elephants are headed towards a tusk-less future? Perhaps, says Sukumar. “With only slight advantage of tusk in sexual selection, there is little possibility of revival of the tusk gene. Any external factor, such as poaching, that comes as a disadvantage for tusk will lead to ‘tusk-lessness’,” he explains. “Eventually, the trend of makhna crowding out the tusker will seep into other populations as well. To me, the tusk seems to be on the way out in Asian elephant populations,” he adds.

In Sri Lanka about 98 per cent male elephant population is tusk-less. While the reasons for this are not yet scientifically determined, it could perhaps be the first population to lose the tusk entirely.

Evolution of the tusk, in fact, is one of the most intriguing, unresolved mysteries of the evolutionary biology. Fossils of elephant species that have gone extinct suggest that all of them had very long tusks. Of the three elephants species that survive in the world, tusklessness is a characteristic of only Asian elephants. In mildly poached populations of the African Savannah and African Forest elephant species, 99.9 per cent of the males and 98 per cent of the females have tusks.

“Six years ago when I asked Professor Sukumar why some Asian elephants do not have tusks, he asked me to find out why elephants have tusks in the first place,” says Chelliah. Since evolution of the tusk was attributed to sexual selection I decided to verify this, she adds.

When Darwin could not explain the evolution of some of the exaggerated and seemingly useless ornamental male traits such as the peacock feathers or the antlers of the Irish elk through his theory of natural selection, he proposed the mechanism of sexual selection. He suggested that the males compete with each other to mate with females and the male trait may function as a weapon or the females may actively choose the most splendidly ornamented male for mating. So does Darwin’s theory of sexual selection apply to the evolution of the elephant tusk? “It does not hold true for the present population of elephants. And there could be two possibilities in the past: the tusk either did not evolve through sexual selection or if it did, it evolved before the evolution of the musth. More robust studies are needed to verify this,” she says.

While Chelliah and Sukumar are still working to find answers to why the elephant tusk evolved and why the females in Asian elephants do not have tusks, their study on tusk’s role in sexual selection has made it clear that the tusk is on its way out in the Asian elephant populations. However, there is a silver lining in this. “The elephant as a species will survive. With this evolution, the elephant will practically make itself immune to poaching for ivory,” says Sukumar. As Papul Rabha, a forest guard in Kaziranga, puts it, “I have always seen makhnas walking with their head held high unlike the tuskers. It is perhaps because they have nothing to lose.”