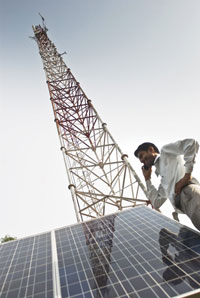 Telecommunication is a success story in India. Unfortunately, it is also a story of pollution. The increasing number of mobile phones has spawned mobile towers across the country. India, the second largest mobile phone market and also the fastest growing, has over 440,000 telecom towers now—over 60 per cent powered by diesel.

The diesel-operated telecom towers emit one per cent of the country’s total carbon emissions, says a report by Telecom Regulatory Authority of India (TRAI). “While the figure may not be significant, rapid growth of telecom in the coming years calls for efforts to contain its carbon footprint,” says the report. It is expected that 240,000 more towers would be added by 2020.

In rural India, diesel powers 87 per cent of telecom towers due to lack of grid power. In urban areas, the figure is 33 per cent. TRAI suggests telecom towers consumed 3.5 billion litres of diesel in 2011. India has 966 million telephone users, of which 97 per cent are wireless users.

The Department of Telecommunications (DOT), after consultations with stakeholders, released policy directions on green telecommunications in January last year. But the directions remain on paper after the telecom industry players immediately rejected them for being “illogical and unaffordable”.

The major bone of contention over the recommendation has been about who will fund the transition. According to the Cellular Operator Association of India (COAI), around Rs 66,000 crore will be required to meet the targets by 2020. The government has not agreed to the figure but does not have an estimation.

Industry players say it cannot foot the bill because the industry is already reeling from a debt of Rs 250,000 crore. “Post the 2G and 3G spectrum auctions, the industry is under debt and is barely able to meet its expenses. Raising additional funds is difficult,” says Rajan S Mathews, director general, COAI.

DOT sources say that neither its parent ministry—the Ministry of Information Technology—nor the Ministry of New and Renewable Energy (MNRE) is ready to fund the transition because of budget crunch.

An inter-ministerial committee, which was set up last year by DOT to decide the amount of Viability Gap Funding required for green telecom towers, took an entire year to decide it needs to hire a consultant for its job. In September this year, PricewaterhouseCoopers was hired to prepare a report on the roadmap for greening the sector, finding suitable technology and the quantum of funding. “It is like going back to the drawing board. If we spend so much time in discussions, we can in no way meet the targets,” says an official of DOT requesting anonymity.

The targets “are financially and technically unreasonable”, says Umang Das, director general, Towers and Infrastructure Providers Association (TAIPA). It amounts to powering towers with almost 3 gigawatt (GW) of renewable energy by 2020. It means powering over 100 towers with renewable energy every day by 2015, which is impractical.

Mathews says, “These targets are more than the country’s cumulative off-grid target of 2 GW under the Jawaharlal Nehru National Solar Mission for 2022.” And, the cost required to achieve these targets is prohibitive, claims the industry. Bharti Infratel, one of the leading providers of tower and related infrastructure, says powering towers through the grid costs an average of Rs 6 per unit. Diesel power costs Rs 18 to Rs 24 per unit. Renewable energy sources are the costliest, with the price varying between Rs 20 and Rs 40 per unit. “Since the grid currently powers only 33 per cent of telecom towers, we are forced to use diesel. It is not a choice,” says Mathews. 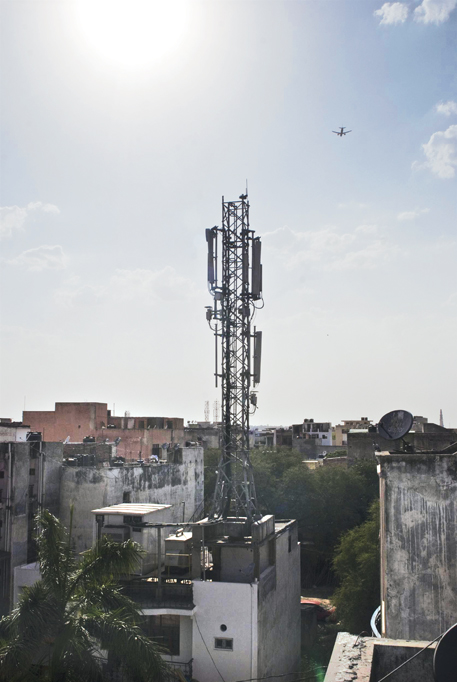 Industry players say finding a renewable energy alternative is also difficult. They point out that while solar energy is the best option because of its easier scalability, finding space for installing solar panels will be difficult. On an average, a 1 kilowatt (kW) solar panel requires a space of eight square metres. “Finding suitable space is a problem, especially in urban and semi urban-areas,” says Mathews.

Solar energy also has a limited power output of about 15 per cent of installed capacity. To match the required power, the size of the panel needs to be increased. It means increase in cost and space, says TAIPA. Currently, the price for a Watt of energy from solar panels is between Rs 70 and Rs 100.

Cheaper in the long run

It costs around Rs 15 per unit when diesel is used to power a tower. It can touch Rs 60 in case of pilferage. Per unit cost will also go up with increase in the price of diesel, says report.

“With solar power, per unit cost, with battery backup, will be around Rs 12. The upfront cost of buying solar panels could be a lot but the system has little operational cost. The payback period is around four years,” says Gopal.

Energy experts also say the industry estimate of Rs 66,000 crore for the transition is lower than the Rs 80,000 crore service providers will pay to set up diesel-powered towers by 2020. They say a solar panel has a life of 25 years, which is higher than the average two years of a diesel generator.

“A well-designed hybrid can bring down the operational cost by almost 90 per cent in off-grid sites,” says Teckkee Shih of Alta Energy, a Bengaluru-based company specialising in green telecom towers. (See ‘Solar is cheaper’).

According to experts, powering off-grid sites with only renewable energy sources could also be uneconomical. It costs Rs 20 lakh if a tower with 1 kW load in an off-grid site is powered using solar energy. It is because of high battery capacity. There are about 70,000 off-grid sites in the country. The cost would come down to Rs 14 lakh if the same site is powered by a hybrid of solar, batteries and diesel. “Autonomous solar solutions are recommended only for sites which are in difficult terrain,” says Shih.

TRAI believes that switching existing towers to solar will save Rs 85.9 billion in operating expenses for the telecom industry, compared to the current diesel solutions. “It is double standards on the part of the industry. On the one hand, they say the targets are unaffordable and on the other, they float a figure to meet them,” says the DOT official.

Analysts say the industry argument of space is also not entirely true. It might be a problem in urban areas, but most of the towers in cities are powered by the grid. “These sites can be upgraded to run without diesel generators just by increasing battery capacity which is charged directly through the grid connection,” says Shih. Besides there is a lot of roof-top space.

Gopal suggests another model. Since most urban towers are grid connected, the operator can directly buy renewable energy from power producers to power them, he says. In certain states like Tamil Nadu, wind power is cheaper than grid power. Gopal says even the cost for the transition to green energy can be cut down. He suggests that service providers can work out an arrangement with vendors who sell solar power on a per unit basis. Telecom operators can also avail 30 per cent subsidy that MNRE provides for off-grid decentralised solar projects.

A study by The Energy and Resource Institute notes a major flaw in DOT’s directions. They say towers are to be hybrid-powered but do not specify the minimum installed capacity of renewable power. Going by this, even few wattage of renewable power can be considered sufficient for targets. “It is up to the telecom operators. They should do as much as they can,” says A Robert Jerad Ravi, adviser, TRAI.

The telecom industry floated a proposal last year to hire Renewable energy service companies (RESCOs), which provide renewable energy solutions to consumers, but only two companies responded. More than 70 RESCOs were approached but only two came forward for powering 1,100 towers with hybrid energy. “No RESCOs want to take the responsibility of maintaining the sites. Then there is resistance from existing site managers. Most telecom sites are rented and those managing them are involved in diesel theft,” said G Prasad, director, MNRE.

In 2010, MNRE sanctioned Rs 16.5 crore to Bharat Sanchar Nigam Limited to solarise 100 towers located in 11 states. Three years on, only 1.5 crore has been released and most towers are yet to be solarised. “It is because of the lethargy of bsnl,” says an MNRE official.

The government’s policy directions on green telecommunications ask service providers to declare the carbon footprint of their network operations twice a year. The carbon footprints are to be calculated using a formula suggested by TRAI. “The formula is complex and misses important points,” says TAIPA.

For example, the proposed formula uses the efficiency factor as constant but in reality, efficiency of a diesel generator set changes over time, depending on the usage. When Down To Earth asked TRAI for the carbon footprint data declared by operators, it refused to share it and said, “We are examining if the data is correct.” Service providers have also been asked to evolve a carbon credit policy to achieve a 50 per cent reduction in carbon footprint level in rural areas and 66 per cent in urban areas by 2020, taking 2011 as the base year. No service provider has done it so far.

Telecom operators have powered 4,000 towers with hybrid energy to show that they are doing their bit. Bharti Infratel has powered 1,300 telecom tower sites with solar energy. “The industry has been reducing carbon emissions in other ways as well, including the use of efficient equipment, which has brought down power consumption by about 30 per cent over the p ast few years,” claims Mathews.

The 4,000 industry-developed hybrid towers account for just one per cent of the total number of towers in the country. The government and the industry need to break the logjam, and soon.