Tracing a path from the sun

Present-day interest in solar power has arisen mainly because of rapidly dwindling energy resources. But the quest for tapping the sun's energy began in ancient times.

Tracing a path from the sun 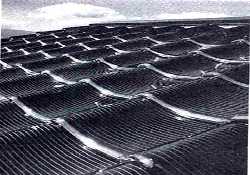 FOR THOUSANDS of years, humans have strived to utilise the sun's energy. Through the ages, the potential of solar energy has been exploited with increasing effectiveness in numerous applications, from small installations to the gigantic solar power stations. Solar energy was perhaps conceived as necessary for survival and as an expression of the human need to create a better future.

The first evidence of solar energy use can be traced to prehistoric times. During the Mesopotamian civilisation, temple priests used burnished vessels of gold to reflect sunlight and ignite the fire on altars. The Chinese, during the Han dynasty (206 BC to AD 220), used concave bronze or copper mirrors to light their sacrificial lamps.

Solar energy was harnessed to generate morning signals from "sound statues" in Egyptian temples during the reign of King Amenhotep III (1477-19 BC). The morning sun heated the air inside the statues and as the air rose and passed through an aperture, sounds would be produced. The effect was then perfected to generate a song from an artificial bird in the burial chamber of the king's son.


Perhaps the most "innovative" use of solar energy in ancient times was the story of the burning of the Roman fleet in 212 BC. Using small, square, movable mirrors on a huge surface, which reflected the rays of the sun, Archimedes is believed to have ignited the sails of the ships and destroyed the fleet.

With the Renaissance (1300-1600 AD) came many unique solar devices. Though most of these were "toys", with no practical application, it was an indication of the change in man's mythic relationship with the sun -- early religious and cultural beliefs and superstitions giving way to a scientific attitude.

The latter half of the 17th century saw the birth of several useful devices. The French created "sun engines" that used the sun to heat air to pump water. They also constructed "solar furnaces" with burnished iron, glass lenses and mirrors to smelt iron, copper and other metals. One such furnace, designed by Antoine Lavoisier, the discoverer of oxygen, could be heated up to 1,7500C -- no mean achievement in those days -- by using two lenses of 130 cm and 20 cm diameter. Various types of hot-air engines that could drive everything from printing presses and electric motors to distillation processes were the high points of this age.

In 1839, French scientist M Becquerel discovered that sunlight generates a weak current in certain materials, like electrodes in an electrolytic solution. This landmark discovery ushered in the age of the solar cell and led to the designing of a solar battery that could drive a small electric motor. In 1872, a solar-powered desalination plant was installed in Chile. The 4,800 sq metre plant produced 23,000 litres of distilled water daily for 40 years for miners of the area. It was abandoned in 1908 when the mine was closed down.

Towards the end of the 19th century, a major breakthrough made solar energy more popular. A variation in the nature of the cells from types that focussed the sun's rays to a point to a type that collected the sun's rays on an even, flat surface allowed solar devices to be operational even on cloudy days. This resulted in more economical and simpler-to-construct solar-powered applications.

A number of solar-powered pumping stations and desalination plants were built across the globe at this time, based on both kinds of solar collectors. One of the largest plants, measuring 10,000 sq metres, was operational for 10 years on the Greek island of Patmos in the Mediterranean. These often consisted of umbrella-like units with thousands of mirrors to collect and concentrate the sun's rays at a focal point where a boiler was positioned. The water in the boiler was heated to steam, which drove a centrifugal pump.

The 20th century saw a marked thrust in solar energy research, with agencies like the United Nations and the North Atlantic Treaty Organisation becoming involved. The founding of the International Solar Energy Society in 1954 helped communication between inventors, researchers and publications. However, despite the increased reliability of solar devices, few of them survived the sudden competition from cheap fossil fuels.

Even though solar energy was "free" and readily available, capital costs were high. During World War II and the years that followed, research in solar energy came almost to a standstill. Slipping oil and natural gas prices in the early 1960s further diminished interest in solar energy.

In 1973, UNESCO organised a solar-energy conference in Paris. Later that year, the Organisation of Petroleum Exporting Countries restricted oil exports to the industrialised nations, setting off dramatic rises in oil prices.

The 1973 crisis drove home the point of oil's short-term nature as an energy source. Almost all industrial countries intensified investment in solar energy research. Multinational oil companies began buying into solar energy enterprises and became the dominant owners. At the end of the 1980s, the oil companies were replaced by electronic and nuclear-power giants. The Americans lost their dominance in the field, giving way to the West Germans and the Japanese.

The Gulf War in 1991 made a number of countries -- who spent the lion's share of their export income on oil inputs -- look around for renewable energy sources. In the past few years, clear signals have emerged about the increased commitment to save energy. This, coupled with the growing interest in solar energy research, has raised hopes of better ecological future of the world.

Viewed historically, the idea of tapping the energy of the sun has emerged many times, only to fade away repeatedly. It has now returned, and, in all probability, will remain. The fact that the world environmental situation has deteriorated dramatically will lead to a greater realisation that the use of solar energy should be increased. While its potential has always been well known, much work remains to be done to market it as a safe and inexpensive energy alternative.

Written by Sumanta Pal, based on The Sunshine Revolution by Harald N Rostvik.