Sighted only twice in India since its discovery in 1899, the peacock spider is in huge demand as a pet in the West 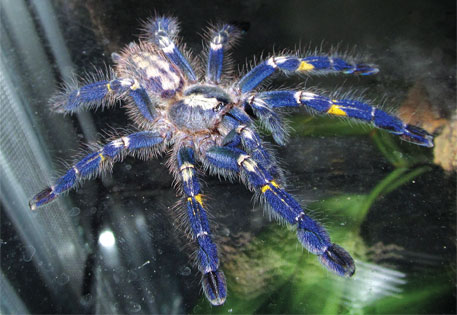 IN JANUARY 2013, a team of researchers studying the biodiversity of the Seshachalam Biosphere Reserve in the Eastern Ghats of India came upon an unusual sight. They found a dead specimen of a spider, which their trained eyes could immediately recognise as an unusual find. The spider was a member of the tarantula family known for its often hairy and very large size. But this specimen had an eye-catching metallic sheen, blue in colour with patches of intense orange-yellow, black and white. The researchers took the specimen to their lab and on further investigation it became clear that they had made a spectacular discovery. The tarantula they had stumbled upon was so rare it was only the second time since its discovery in 1899 that it had been seen in the wild in India. It was the Gooty tarantula, also known as the peacock tarantula or metallic tarantula because of its attractive iridescent colouration.

The chance discovery of this arachnid by wildlife biologist Bubesh Guptha from the Bio-Lab of Seshachalam Hills, Wildlife Management Circle, Tirupati, and his colleagues was noteworthy for another reason: the place where the spider was found. A century ago, the tarantula was discovered by British researcher Reginald I Pocock in a single location less than 100 square km (sq km) in the reserve forest between Nandyal and Giddalur in Andhra Pradesh. The recent spot of discovery was near Chittoor and Kadapa districts of Andhra Pradesh, more than 150 km from the original habitat. Clearly, the tarantula had a wider home range than believed.

There had been quite a confusion regarding the original habitat of the tarantula even when it was discovered and described for the first time. In 1899, it was found in a railway timber yard in Gooty, Andhra Pradesh. The name ‘Gooty’ stuck, but experts were of the opinion that the place was never the spider’s original home. It had been found in a pile of timber in the railway yard and had, therefore, travelled with the wood pile to Gooty.

Crawling critters are not always the most likeable life forms from the human point of view. Nevertheless, a spider as stunning as the Gooty tarantula is hard to miss. This peacock of the spider world does not only have a mammoth size but also a noticeable blue lustre that makes it quite easy to spot. Why was it then that this particular arachnid could continue its Houdini-like act and remain hidden for a 100-odd years, its existence verified only twice in the long history of life on Earth? It might be because it never wanted to be found. 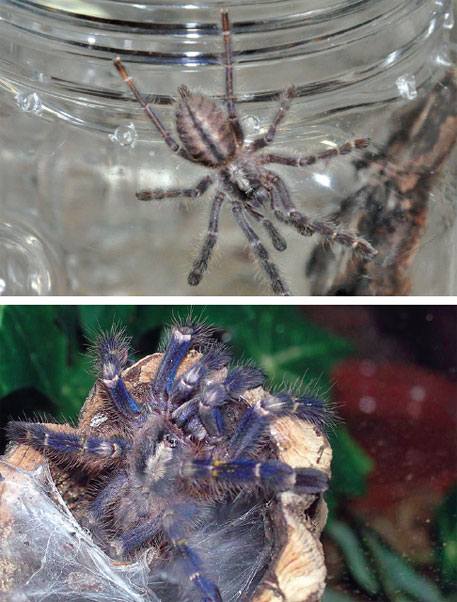 “In nature they are found in xeric or mesic montane forests and plantations. Live in silken retreats in hollows of dead and alive trees and other covertures, as a rule, located above the ground natural retreats,” wrote Pocock, describing the habitat of the then new species Gooty tarantula (Poecilotheria metallica) in the British Museum where the specimen was kept.

According to Guptha, “The genus Poecilotheria belongs to the family Theraphosidae and is made up of arboreal species of spiders, which are known to occur in India and Sri Lanka. The genus is represented by eight species in India and seven in Sri Lanka.” The distinctive feature of these spiders is their ability to remain hidden inside tree hollows or under rocks. Since no one went looking for them, they remained elusive, blissfully surviving in their tree retreats.

In search of the Indian giants

Scientific study of these giant spiders is relatively recent and began after measures to curb illegal trade of the species were taken in the late 1990s. To protect the spider, Sri Lanka, one of the main suppliers, and the US, the main market, proposed to include the genus Poecilotheria under the Appendices of the Convention on International Trade in Endangered Species of Wild Fauna and Flora (CITES). But CITES did not agree as there was no information on the spider. As a result, various bodies got involved in studying the spider. In 1998, the Species Survival Commission Wildlife Trade Office in Cambridge contacted the Invertebrate Conservation Network of South Asia (ICINSA) for information on tarantula spiders in the wild. To this end, a survey was organised by ICINSA. But during the course of the survey it became clear that there was not a single tarantula expert in India or Sri Lanka. Much of the information gathered on the distribution of the spider came from questionnaire-type surveys and interviews of tribal people and forest guards. To make amends, three tarantula experts—Andrew Smith, Peter Kirk and Rick West—were invited for a five-day field study in India in 2001. This led to more Indian scientists taking up the challenge of studying the giant arachnids. Manju Silliwal, Sanjay Molur and B A Daniel from Coimbatore-based Zoo Outreach Organisation were part of the study team and deserve credit for bringing the species in focus through their work. 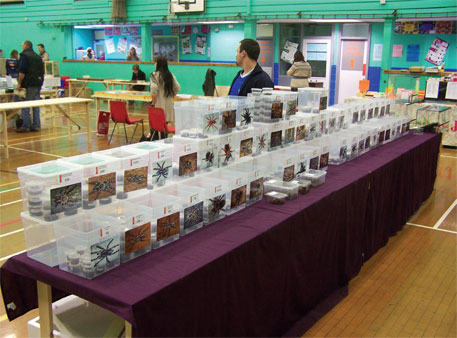 Researchers would begin their day armed with ladders and dental mirrors. They would scale trees and use the mirror to check for spider silk inside tree holes, hoping to catch a glimpse of the giant arachnid. The Gooty tarantula was seen again during this field study. Andrew Smith remarks how even for seasoned spider-hunters like themselves it was no small accomplishment to find the tree-loving spider.

The hard work paid off and based on this primary assessment, the International Union for Conservation of Nature (IUCN) categorised the species as critically endangered.

The scientists warned in their report, “The habitat where the species occurs is completely degraded due to lopping for firewood and cutting for timber. The habitat is under intense pressure from the surrounding villages as well as from insurgents who use forest resources for their existence and operations.”

The report also says there is a decline in the “quality of habitat” of the spiders who seek cavities and deep crevices in old forests. It says that the spiders have been categorised as critically endangered because their range is restricted to a less than 100 sq km location.

While years of isolation saved the peacock tarantula from the constant human glare, it also allowed ruthless destruction of their habitat. In the past the sighting of the spider might have been rare because it kept hidden, but at present its numbers are small due to its reduced habitat.

In huge demand as pets

There is another world beyond the shores of India where the Gooty tarantula exists in plentiful numbers. Despite its venomous nature, the tarantula is one of the costliest pets in the exotic pet trade.

How a spider so rare, native to a remote location in India, found its way to the other side of the world is still a mystery, but many avid hobbyists in Europe, UK, US, Canada and South America have been keeping and breeding the Gooty tarantula as a pet.

Richard Turner of the US says he has kept four of these spiders as pets since 2006. John Spinella, another enthusiast based in the US, says, “They are not easy to acquire and if you do find one, it costs about $150. Adult females can cost as much as $400.”

Among these spider enthusiasts, the tarantulas are code named “pokies” and many are quick to suggest that these are not a pet for beginners. A 23-year-old who has kept a Gooty tarantula since 2012 says, “When you get into tarantula ownership, you will likely find it hard to keep just one. Just make sure this is not your first one. Unless you like learning through pain.”

Another hobbyist, who does not wish to be named, claims to be the first to have bred the Gooty tarantula in the US. He says: “In 2002, there was a whisper going around among tarantula enthusiasts about a blue beauty of the genus Poecilotheria. At that time the spider seemed to share the same status as unicorns and leprechauns, but then I realised it was more than fiction.” He says that when he looked into the archives, he found that they did exist. “Described by Pocock in 1899, this amazing arboreal tarantula from South India was now a successful breeding project by Henrik Wessell Frank of Denmark. This news spread fast throughout Europe and the US and by spring of 2003 Frank Somma, a Staten Island, New York arachnid importer, claimed he had access to a handful of Poecilotheria metallica. Prices were incredibly high for these original imports, but I bought them anyway. Other tarantula keepers also splurged on this beautiful spider and therefore at this time several US hobbyists and breeders have them,” he adds.

It is, thus, a strange kind of existence for this sapphire spider. At one end, it battles the ever-growing human penetration into its only known natural habitat, and at the other end it survives in artificial glasshouses, captive but breeding and growing in numbers.

Molur and Siliwal continue to study the tarantula and have coined another name for them—the parachute spiders—due to a remarkable behavioural trait. They found that when the males are disturbed while sitting on a tree or on a wall, they tend to jump either to a neighbouring tree or, more often, just parachute down like a leaf to the ground.

Perhaps it is time to let a few of these spiders parachute back to their country of origin so that these exotic creatures can thrive in their natural home. The expertise of captive breeders can for once be used not to create pets, but to re-introduce the species in the wild.

Atula Gupta is the founder and editor of www.indiasendangered.com. She is also the Asia editor-in-chief of Jeff Corwin Connect, writing on issues related to conservation of endangered species of India and the world