Despite the general reluctance of farmers to adopt organic farming, one village in Tamil Nadu is using these techniques successfully. 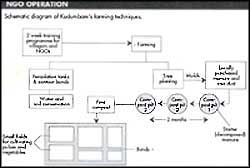 THE EXPERIENCE of Kudumbam, a voluntary organisation based in Tamil Nadu's Pudukottai district, shows organic farming is more readily accepted by villagers when propagated by a non-governmental organisation (NGO) than by individual farmers.

Kudumbam disseminates knowledge on organic farming through its Tamil monthly, Pasuthalir. With the help of the local people, Kudumbam has afforested 10 ha of barren commons in Ammankuzai village with neem, eucalyptus, subabul and other local species.

At Kudumbam's 9-ha farm in the dry Odugampatti village of the district, water is conserved through seven percolation ponds and contour bunds. Besides using botanical pesticides, mulching, composting and tree-planting are also done. The ground is hoed, not ploughed, so that soil moisture is retained. Agronomist G Nammazwar, who is Kudumbam's secretary, says, "Hoeing the top soil conserves more water than deep ploughing in water-scarce areas like Pudukottai. This way, cowpea and pigeonpea can withstand the stress for about 30 days. The yields may be lower, but there is less risk of total crop failure."

Vegetable crops such as pumpkin, cluster beans, lady's finger and cucumber are cultivated on the bunds with mulching. Pulses such as pigeonpea, black gram and cowpea and kolukattai grass are grown on small plots. Direct sowing of paddy is under trial. According to Kudumbam director Oswal Quintal, because the farm started only in 1990, "it will take another year or two for us to reap the full benefits, but so far the crops are growing well".

Compost is scientifically prepared in three pits. Decomposed manure is transferred from one pit to the other till in two months, fine compost is ready. As the farm does not have livestock, manure and coir dust is purchased locally. Quintal says local farmers just dump cattle dung and agrowastes in pits and use it as compost even before it is properly decomposed. However, local farmers are keen on using dung and manure instead of synthetic fertilisers, because "organic compost is locally made and cheap. It doesn't burn the plants as fast as chemical fertilisers do when there is a water shortage", explains M Abimannan, who owns a 4.8-ha farm in Odugampatti.

In the two-week training programme for 30 farmers and NGO representatives from Tamil Nadu, which Kudumbam conducts every three months, the participants are encouraged to share their knowledge. Though cultivating plants for green manure and compost preparation is gaining acceptance, botanical pest control is the most popular. Abdul Aziz, an Odugampatti farmer, says, "I have started using decoctions of errukkan (Calotropis gigantica) leaves to fight pests and have got satisfactory results."
Botanical pesticides became popular after caterpillars destroyed the groundnut crop in the area in 1989-90. Repellent plants such as errukkan and even banyan leaves were eaten away by the caterpillars. Says Aziz, "The caterpillars soon became resistant to synthetic pesticides." Adds Abimannan, "Finally, with Kudumbam's assistance, we controlled the pests by spraying a decoction of neem oil and leaves." Chemical pesticides drive away pests for a maximum period of two weeks, while plant-based pesticides are effective for the entire crop period he says.

Kudumbam has developed various techniques for preparing plant-based pest repellents. The stench of the leaves of arali, errukkan and umatham (Dadura) soaked in water and kept in mud-pots at a distance of 10-12 m from the crop keeps pests away. Equally effective is the spraying of a urine-leaf decoction mixture. Seven litres of cattle urine and five litres of leaf decoction are mixed in 25 litres of water for 1 ha of land. "We learnt this from experiments on our farm as well as the experiences of other farmers. The mixture can be used even thrice in a crop season," says Nammazwar.

Kudumbam's pest control expert, K Sivagurunathan, says, "Farmers can collect and store the leaves in a cement pit for ready use." According to him, Kudumbam has been successful in persuading farmers to adopt their techniques because "instead of offering mere advice, we demonstrate the technology in the fields."

Pests are exterminated only in cases of severe infestation. "The idea is to keep away or manage the pests, not kill them," says Nammazwar..