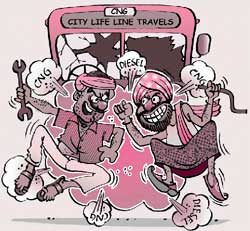 Soon after the March-April orders of the Supreme Court, several hundred private cng buses suddenly came on the roads. Their fares were the same as Delhi Transport Corporation buses. Thus, putting a lie to arguments of Mohan and teri that cng buses cannot work within the current fare structure if the current cng and diesel prices are not touched.

Now, there is a sharp divide between the diesel buswalas and the cng buswalas. Diesel walas are resorting to pressure tactics including dharnas and sloganeering in front of the Supreme Court and calling strikes. cngwalas are keeping away. With the politicisation of the issue even diesel walas stand divided along the lines of their political affiliation. The rift was most apparent during the strike called on August 28, 2001. While the bjp -backed transporters' lobby tried to make the strike a success, the Congress affiliated unions made their task difficult. Congress-backed Federation of Transport Unions Congress refused to participate in the strike.

The cngwalas are willing to invest in cng buses. For example, M M Pal Singh Goldi, chairperson, City Life Line Travels Private Limited, has already bought 100 cng buses. Although he is willing to invest further, the long queues are keeping him back. More bus operators like him would probably switch over to cng if the government gives incentives to the operators. Goldi's only problem with the present situation is the long hours that his buses have to stand in queues to refuel.

Due to government laxity several operators who had been proactive and invested in cng buses are now backing out and making distress sale due to losses incurred. For example, bus operators like Charan Kamal Soni who owns as many as 45 cng buses has sold four of them in August this year. "I never wanted to sell the buses but there is no choice. I cannot recall a single day when my buses have waited for less than 18 hours at the filling station." Meanwhile, the Delhi Contract Bus Association has even moved the Supreme Court to demand compensation for the losses due to unavailability of gas.

The detractors of cng have all been on the roll arguing that the experts who recommended cng did not know their science or public policy. The confusion has confounded our media, making people feel that there is an easy alternative, which has not been considered, serving the interests of the diesel lobby. Here are some gems:

Fact: ulsd is not available in India. It will have to be used in a euro II bus, whose costs will be higher than the current diesel bus and a particulate trap costing at least Rs. 1.5-2 lakh would have to be fitted.

Moreover, ulsd would be more expensive per litre than current diesel. Thus, capital cost of a ulsd bus would be quite close to that of a cng bus and operational cost much higher. On the other hand, a cng bus has only a higher capital cost (which can be taken care by a few one-time fiscal incentives), but operational costs are lower.

l Economic Times, April 25, 2001 (If cng 's the best why isn't the world using it): "Says Mr Shivraj Singh, joint secretary in the Union petroleum ministry, " cng is not the only option for a clean fuel -- ulsd , already being supplied to the capital, is just as emission-efficient.""

Fact: Trust Shivraj Singh, Naik's point babu to destroy the cng effort. Maybe ulsd is already being supplied to the capital. Singh is an ias officer and he is, of course, privy to information that nobody else has.