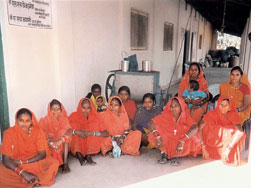 Converting traditional medicinal knowledge into fortunes--this is what a group of women in a remote village in Chhattisgarh are doing. In the sleepy village of Donga-nala in Korba district, about 160 km from the state capital, Raipur, these women run a unit for making medicines from herbs from surrounding forests.

In just a year, they have earned Rs 15 lakh. From being impoverished agricultural labourers, they have become prosperous entrepreneurs. "This has given me a sense of identity," says Phuleshwari, a 16-year-old.

It took time to bring about this change. Ramfal Patel, a young man from the village, set the ball rolling. With a training from Shanti Kunj, an ayurvedic institute at Haridwar, Uttarakhand, Patel started helping the state forest department identify and preserve herbs in 2002, when the state government started promoting Chhattisgarh as a herbal cornucopia. "Chhattisgarh has an abundance of herbs and medicinal plants. The villagers know their medicinal value, but not the commercial potential. I just showed them how to exploit that," says Patel.

The herbal initiative began in Donganala. In 2006, about 20 women met and formed a self-help group (shg) named Haribol. Patel prescribes compositions for medicines and provides them with technical knowhow; the women collect herbs from the forests and grow some in nurseries, and then process and package them.

After sussing out demand, the group started preparing 30 products, of which medicines for cold, diabetes, joint pains and indigestion, and herbal products such as tea, facepacks, toothpaste, honey and chyawanprash are much in demand. "The compositions are certified by a registered ayurvedic practitioner and approved by a government lab," says Patel. The group's yagna products are also in demand--selling up to 1,100 kg a month, fetching about Rs 75,000. "We are self-sufficient now," says Uma Yadav, secretary of the shg.

Help from the state government was crucial. The State Herbal Medicine Board, which promotes cultivation of and trade in herbal medicinal plants, gave Rs 1.2 lakh as seed money. "About 44 per cent of the state's area is under forest and more than 1,100 varieties of herbs are found. Along with ex situ conservation and cultivation of medicinal plants, we also stress on capacity-building for local communities," says Harish Tiwari, additional chief executive officer of the board. As business picked up, the forest department pitched in and provided them with a dryer, a grinding machine and a building for packaging medicines. "The group does commendable business," says Shaligram Sai, sub-divisional officer of Pali in Korba. Last year the group installed a transformer worth Rs 5 lakh with its own funds. Frequent power cuts in the area do not disrupt its work anymore.

The government has also given the group access to its statewide chain of herbal goods stores, Sanjeevani. With orders flowing in, the group is aiming high. "As the business grows, we will soon expand our product portfolio," says Subhmati, a group member. In the last four months, Haribol received orders for products worth Rs 8 lakh. Confidence among these women is high. "Our products have carved a niche. Now there is no looking back," says Yadav.

Haribol is now among three all-women shgs in the state to take up large-scale preparations of ayurvedic medicines and honey. Of the two other groups, one is in Koriya district's Baikunthpur village and the other in Korba's Pali village.

Their success is already inspiring people in the region. Two groups have, in fact, been formed in the same village, one engaged in handicrafts and the other in vermicomposting. "People are now realizing the potential of their forest herbs," says Patel. "Under the state government's herbal farming initiative, the forest department has been engaged in herb protection and development in the area since 2002. But it is only now, after local communities have started participating in the initiative, that the true potential of herbs and herbal farming is being realized," says Sai.